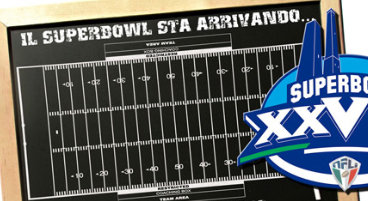 On Sunday, 2 February the United States came to a halt for the time-honoured tradition of consuming untold quantities of beer and chicken wings, while watching grown men beat each other to pulp – the Super Bowl. Football aficionados at SAIS Europe found themselves being tried to great lengths to enjoy the tradition here in Italy, with a 12:30 am kickoff time.

Despite the very real threat to Monday morning class attendance, several committed students were up for a celebration. Elaborate house parties were organized, while there was even an all-night event at a local pub for those willing to make a night out of it. Bologna’s streets teemed with Americans making beer runs, but Italians and other nationalities, too, braved the late hour to watch the Seattle Seahawks and Denver Broncos face off into the wee hours of Monday morning. House parties boasted Super Bowl staples like chicken wings, potato salad and insalata caprese (just to add some local flavor).

Bologna’s very own American football team may have something to do with the healthy local interest in the quintessentially American sport. Bologna is home to one of the best professional American football teams in Italy. The Bologna Warriors are consistenly top-ranked in the Italian Football League (IFL), in this land of calcio (soccer). Though certainly better than the local soccer team, which has been rooted to the bottom of the league all season, the Warriors’ fan-base can’t quite compare.  But if American football is not poular here, that wasn’t clear on Sunday night.

In Bologna, the superbowl offered a night of cultural exchange as the Americans took great pride in explaining the intricacies of the sport to confused foreigners. “It was very interesting to see how, even so far from their homeland, and despite the inconvenient timing, the Americans came together with foreigners to include them in celebrating one of the great American sporting events,” said Alfonso Camacho-Martinez, a SAIS Europe MA student from Colombia.

Previous post From SAIS to Project Finance in Brazil