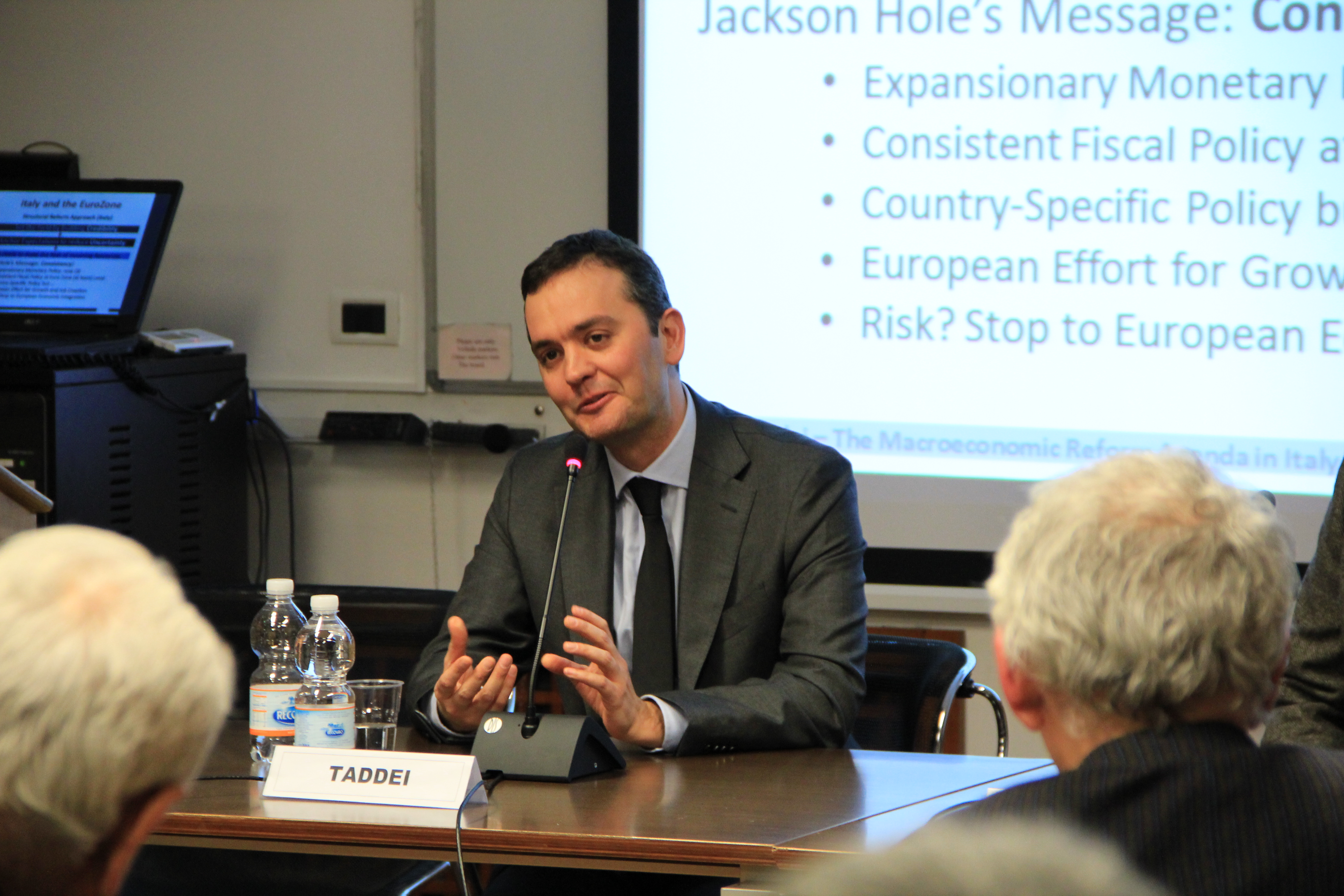 BOLOGNA — With the struggling European economy front and center in the news and frequent Italian union general strikes affecting travel plans, the macroeconomic reform agenda in Italy has had a significant impact on the lives of many SAIS Europe students and professors.

As part of the Bologna Institute for Policy Research’s speaker series, SAIS Assistant Professor of Economics Filippo Taddei, also the chief economist for Italy’s ruling Partito Democratico, discussed the reforms he and the PD are working to implement to strengthen Italian macroeconomic competitiveness.

Taddei started his talk by presenting some historical context for the current state of the Italian economy. While most SAIS students may only have experience with Italy’s troubled, slumping economy, that has not been a permanent feature. From 1981 to 2000, Italy averaged about two percent annual growth in GDP per capita, right in line with the OECD average. Since 2001, however, Italy has had the lowest growth rate of any OECD country and, along with Portugal, is only one of two countries to experience negative growth.

“When you get to 2000, something broke,” he said. Investment as a share of GDP declined significantly, hinting at a structural problem behind the economic malaise rather than a regular economic cycle. As a result, the reforms the PD have proposed attack what they see as the underlying structural problems – namely the tax structure, government spending, and, most controversial in Italy, the rigid labor market.

The issue with the tax structure, according to Taddei, is that it hits some parts of the economy too hard. “Taxes are disproportionately on the factors of production,” he said. Tax cuts were paired with a decrease in government spending, instead of what has become the standard approach, to “frontload” tax cuts and investment and cut spending later, ideally after the economy has rebounded. The reason for this, he said, was because Italy lacks the economic credibility to do so, as it already has massive public debt sitting at greater than 100 percent of GDP.

Taddei spent the lion’s share of his presentation discussing the most controversial aspect of Italy’s economic reform package, the labor market reforms. He said that some reforms have already been made at the margins of the labor market, particularly on temporary contracts, but he emphasized that the percentage of temporary workers in the Italian labor market is comparable to the European average, meaning that is not the issue.

The issue, he said, is that temporary workers were not getting trained nearly as well as permanent workers and that when their contracts were up, they were not covered by unemployment insurance. In addition, fewer and fewer young workers entering the labor force were getting permanent positions. This means that fewer Italian workers have the skills employers are looking for, making businesses less likely to invest in the Italian economy.

The solution, according to Taddei, is to encourage businesses to invest in training employees. For them to take this risk, the PD is working to relieve the costs of firing someone during the initial stages of employment. By reducing the risk employers face being stuck with the wrong person, the idea is that they will hire more permanent workers and train them with the necessary skills.

As the reforms strike closer to the entrenched interests of Italian unions, there is significant resistance to them. The unions ordered several general strikes this fall and winter in an effort to block alterations to the current system.

In closing, Taddei remarked that the European context is currently favorable to the Italian reforms. Expansionary monetary policy from the recently announced quantitative easing and a consistent fiscal policy at the European level has created space for Italy to stimulate growth and job creation.

One aspect of the reforms that he did not talk much about – the resistance from the Italian unions – was addressed during the Q&A session afterwards. Ning Ge, a SAIS Europe student, found his answer interesting and useful for students wanting to become policy makers.

“I find it really interesting that he talked as if he doesn’t worry about how much pushback the government would get in implementation,” she said. “He later explained why, because he, as a policy maker, doesn’t need to care about it because he presents options to the politicians for them to make the final political decision. I think that’s really helpful in terms of understanding the policy making process.”