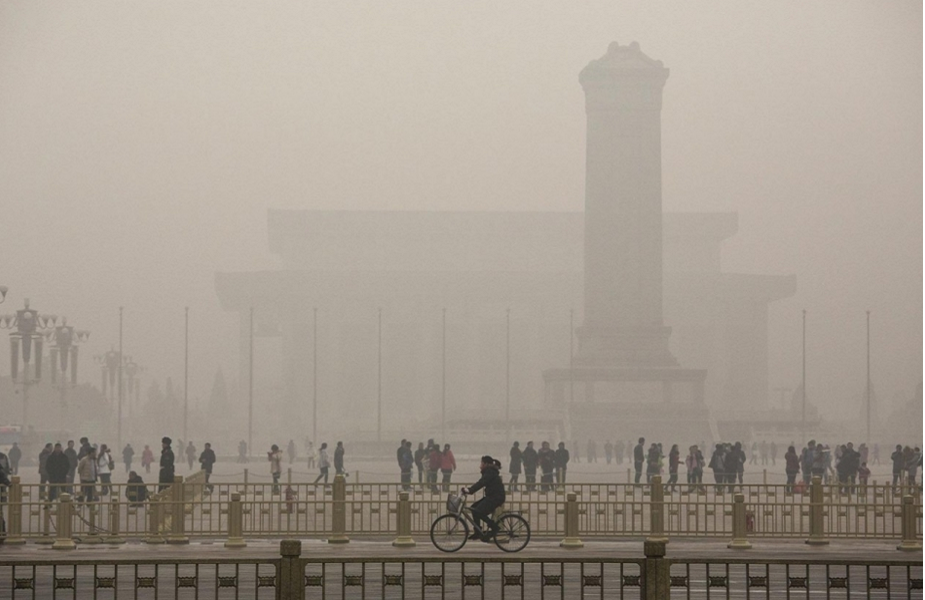 In 2014, a trend on the popular micro-blogging platform, Weibo, featured users posting the quip, “breathing together, we share the same fate.” This was a reference to China’s worsening pollution problem.

News sources report that China’s pollution is visible from space and the extent of the smog problem has induced a “nuclear winter.” Economists have speculated that pollution and carbon emissions will only worsen in the foreseeable future, peaking in 2030. This is a terrifying possibility, as China’s head adviser on environmental policy, Li Junfeng, stated in February that Beijing in its current state is “barely suitable” for living.

As a runner, I feel the impact of China’s environmental problems acutely. But I have found ways to work around the issue.

I constantly check various websites to verify Nanjing’s Air Quality Index and assess whether I should go outside on a given day. The World Health Organization advises that people should not spend prolonged or unnecessary periods of time outside when the PM2.5 level (the concentration of atmospheric particulate matter) is greater than 30. On Jan. 1, Nanjing’s AQI was 179—a score that merits “unhealthy” conditions. For the entire month, Nanjing stayed relatively close to this AQI level, but other cities (and at times even Nanjing) reach the 300 or 400 mark; on such days, I don’t step outside if I can avoid it.

Such complications take a toll on my running routine. As an avid mid- to long-distance runner, it is often frustrating to experience a warm, sunny day, only to realize that the buildings off in the distance are nearly indiscernible due to the smog enveloping everything. When training for a race, most runners tend to have meticulously planned weekly mileages or training schedules, but when Mother Nature throws China a polluted curveball, one needs to be flexible.

Instead of designating Saturday as my endurance run for the week, or setting up a daily plan for specific distance runs, I now have to plan on-the-fly. If a certain day has an AQI reading below 100, then I have to go for a long run. If the AQI is a little higher but still below 150, my body can handle running for a moderate amount of time, but it is not advisable to push your legs (and lungs). When the air quality reaches less healthy levels, running outside is not an option; cross-training and high-intensity aerobic routines in a gym with air filters then become the most optimal means to continue training.

However, air filtration systems and supposed “clean gyms” are often not as clean as they seem.  In much of China, it is commonplace to leave the windows or doors of the building open, even if it is designed with the intent of serving as an unpolluted haven. The issue stems from the lack of an earnest acknowledgment of the ramifications of environmental problems—as poor air quality and unsustainable living standards become the norm, it becomes difficult to implement and enforce policies within gyms (or businesses, or anywhere else) to help mitigate these issues. Although it may seem valiant that lionhearted Chinese runners donned breathing masks to participate in the 2014 Beijing Marathon, the willingness to endure and quite literally run through existing problems is testament to the fact that these environmental issues are not sufficiently understood or addressed.

It is difficult to foresee any rapid changes in China’s attitude towards its environmental welfare, as much of the country’s grand national strategy relies on robust economic growth (which, in turn, generates pollution).

If one comes to accept this reality, maintaining a running regimen becomes more doable: it simply requires coming to terms with the fact that a schedule cannot be followed and that the decision to go for a long run cannot always be planned. Air quality concerns also drive more creative means for dynamic, indoor workouts; in order to sustain aerobic progress, runners have to tailor their workouts to the day’s environmental status.

While I have personally seen regression in my running abilities and overall level of fitness, it is not a totally unmanageable situation. Friends from running groups in Nanjing and Shanghai have claimed, “the air has never stopped me from getting in my weekly miles—I just put on a mask,” and “the air just forces me to work harder on the days I am actually able to run.”

Environmental concerns and ways to promote a more sustainable future continue to dominate public debate in the country. Regarding President Xi Jinping’s visit to Paris and the Chinese government’s launch of a carbon cap and trade system, runners can look forward to the prospect of a greener tomorrow.

It is important to remember, however, whether one is trying to maintain a running schedule or to help mediate environmental issues, progress is a marathon, not a sprint.

Next post Luxury Goods: A Global Outlook for 2016
Zoe Guo