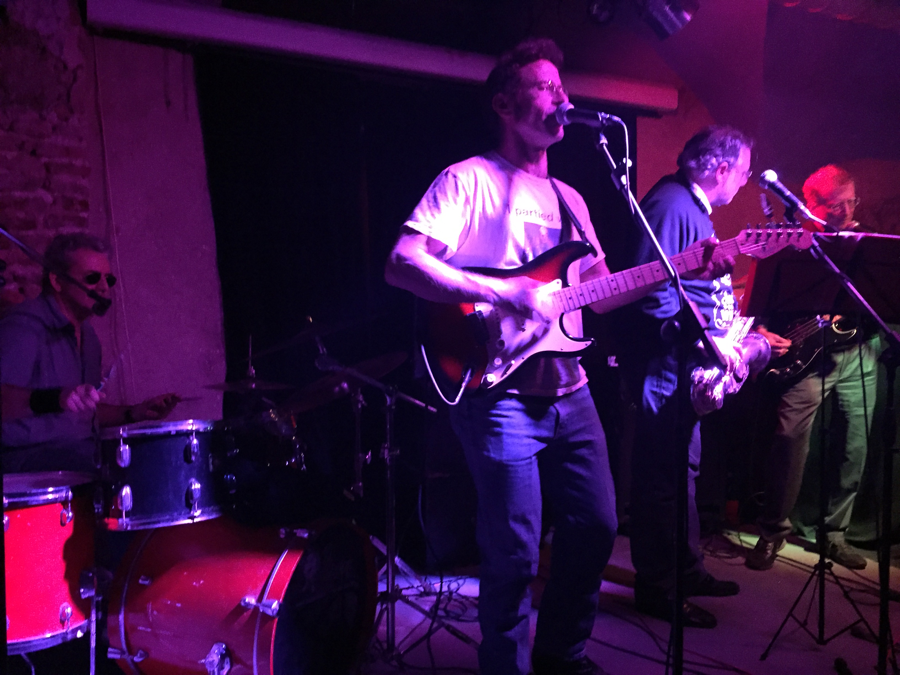 The BC Fuzz have descended upon Bologna’s music scene once again. StyXXX, Koop Doggy Dogg, Bruski, and POPZ (picture left to right) have rejoined forces to bring a mix of originals and covers from the age of classic rock.  The band was formed when Drs. Alan Kuperman and Michael Plummer, whose respective specialties are conflict management and international trade, taught together at The Johns Hopkins University SAIS Bologna Center, now SAIS Europe, in the previous decade. They were joined by doctors in medicine and music, Drs. Stephen Williams and Michael Brusha, to form the band originally known as The Rock Docs. According to Kuperman, these were known as the ‘lean years’ of the band, when their Thanksgiving performances at the Castel Bolognese were sparsely attended and musical accolades were sought after. Hits such as “T.P.P.”, with classic lyrics “Get down with T.P.P., (Yeah you know me!)” failed to land, POPZ noted, so the band relied on wine to serve as inspiration. POPZ, better known as Dr. Williams, was forced to eke out a living as a medical doctor assisting the needs of university students to support his rock star lifestyle during this period. Dr. Brusha, who has been in Bologna since 1972, plays professionally in the city and around Italy; he even performed with rock legend Link Wray before taking his talents to the Fuzz.

Since then, the BC Fuzz has toured the world, playing their jams from Washington, DC to Milan, and from Bologna all the way to Austin, Texas. In fact, their groupie-enticing rock antics got so wild in D.C. that the fire marshal had to be called once or twice to settle down the situation. There’s no need for SAISers to worry, however, because Dr. Stephen Williams is always on hand to offer his medical support and guidance to the graduate students at JHU SAIS. Though the playing of BC Fuzz cover greats ranging from The Who to The Rolling Stones proved to bring out a similarly large crowd at the Arteria in Bologna this past Saturday, Dr. Plummer denied knowing or associating with any groupies in Italy.

The band wooed the crowd with the hit song “Pignoletto”, whose main riff is “I love that Pignoletto, Bologna you’re my only home” (an improvisation of The Standells’ original “Dirty Water”).  The song was dedicated to the legendary Dr. John Harper, a longtime mainstay of the Bologna Center who has previously performed with the musical troupe. Even though POPZ has previously gone through the craziness of having a gig on the eve of JFK’s assassination, he said nothing prepared him for the positively wild reaction of the audience when Harper’s voice begins to carry through the music halls during select performances. Nevertheless, even sans Harper, the BC Fuzz was lauded by the SAIS Europe student in attendance. Student Laura Janss stated that “The band was a lot of fun and it was great to see such a turnout from the SAIS community!“, whereas fellow classmate Chantal Akinyemi loved that “the BC Fuzz and SAIS faculty stuck around before and after the show” to mingle and chat with students. Student Yves Vervecken remarked how the band appealed to all ages, drawing a diverse and politically informed crowd.

While the re-branding of the Bologna Center into SAIS Europe raises questions regarding the band’s nomenclature, the bandmates asserted their name and desire to rock on as the BC Fuzz. The band will be playing next at Acre 121 in Washington, DC on April 8th. Widely hailed as “the most famous hard-working American cover band in Bologna” (Kuperman), only time will tell if the BC Fuzz will overcome their internal divisions on trade and babe policy to continue to bring its soulful renderings of classic hits to the masses.

Next post Showing up with a yes – a conversation with Ken Blackwell about “See One, Feed One”
sgrosve2