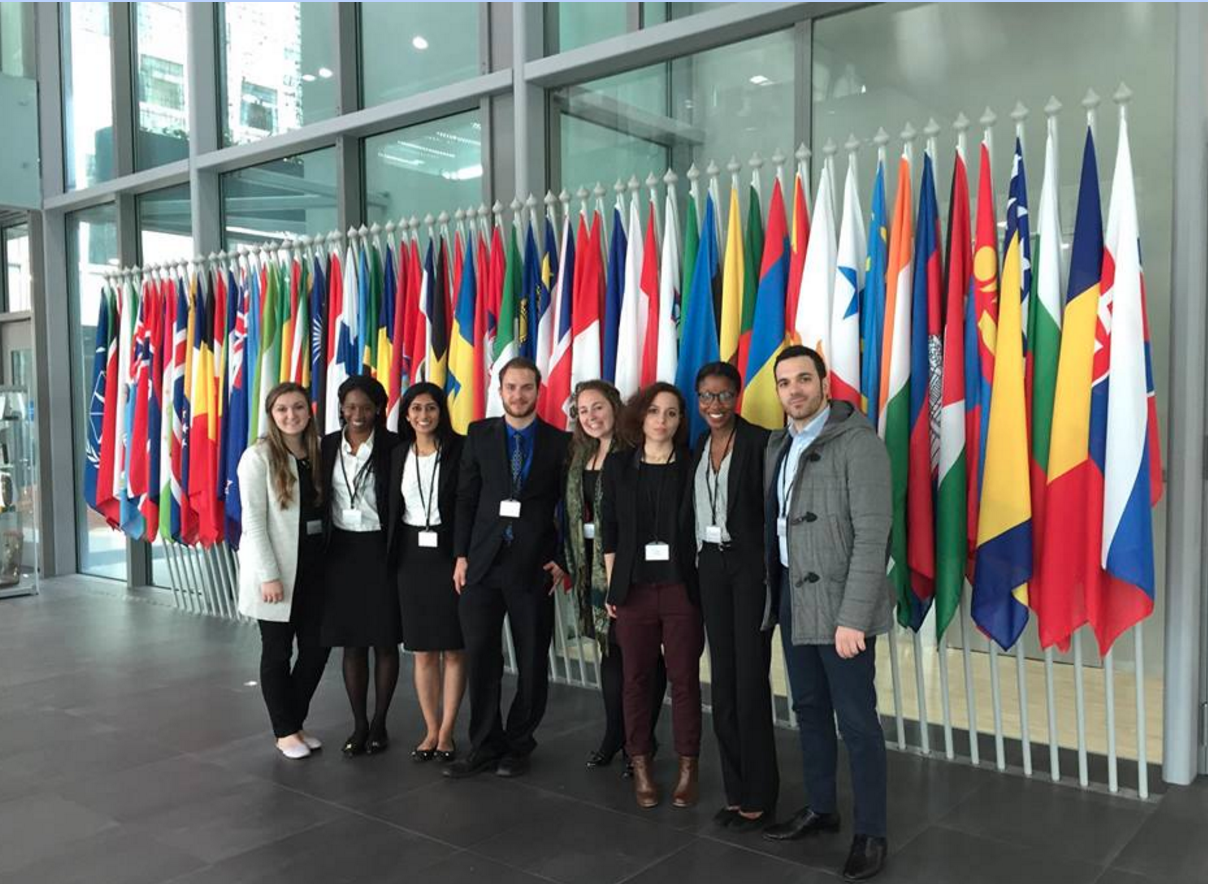 On April 1, eight SAIS Europe students traveled to The Hague, Netherlands as part of a trip organized by Professor Tiffany Basciano in Washington, D.C., for students concentrating in International Law and Organizations. Often referred to as “the city of international peace and justice,” The Hague houses some of the world’s most prominent war crimes tribunals. This trip to the Netherlands gave students the opportunity to visit the United Nations, European Union and independent international organizations and meet the staff of several international criminal law institutions. As part of the visit, students attended meetings at the International Criminal Tribunal for the former Yugoslavia (ICTY), the International Criminal Court (ICC) and Eurojust. When asked to describe her takeaways from the opportunity, SAIS Europe student Kady Hammer stated, “The Hague trip solidified my passion for a career in international law. The trip was particularly insightful as we were exposed to professionals in the ICTY, the ICC, and Eurojust who further explained the role of international organizations in international law.”

The ICTY, originally created in 1993 by the UN Security Council in the midst of continuing conflict in Croatia and Bosnia and Herzegovina, was the first international court of its kind since the World War II tribunals in Nuremberg and Tokyo. The first major investigation concerned the Prijedor region of Bosnia where attacks had been carried out against Bosnian Muslims and Croats in Serb-run detention camps. The ICTY later started investigating political and military leaders including Slobodan Milošević, former president of Serbia and of the Federal Republic of Yugoslavia. Eventually, as the fighting subsided, the tribunal was able to carry out investigations at the alleged sites of violent events such as the genocide of Srebrenica in 1995. Since its inception, the Tribunal has completed proceedings on 151 trials.

At the ICTY, the group met with a Court Support Services employee who worked directly with protected witnesses. In light of the recent decisions at the end of March regarding the cases of Radovan Karadžić, who was found guilty of war crimes, crimes against humanity and the genocide of Srebrenica, and Vojislav Šešelj, who was acquitted, SAIS Europe students were able to ask questions about the implications of these verdicts on the field of international humanitarian law. The group discussion focused on the context of the ICTY’s future transition to the United Nation’s Mechanism for International Criminal Tribunals (MICT) that will exist to carry out measures during the lifespan of the remaining cases and sentences.

The International Criminal Court (ICC) is an independent institution that tries cases against people who have been accused of committing crimes of genocide, crimes against humanity, war crimes, crimes of aggression, and, as of 2015, the destruction of cultural heritage. The tribunal, which exists as the international community’s permanent international court, was conceived in 1998 and has been operational since 2002, consisting of a jurisdiction in 124 states party to the Rome Statute. The ICC has conducted several investigations in countries including the Democratic Republic of the Congo, Uganda, Central African Republic, Sudan, Libya, Mali and Georgia. The group’s meeting at the ICC was with an employee of the Office of the Prosecutor who gave a presentation about the different ICC organs and discussed previous and ongoing cases. Although there was no live hearing, the group was able to enter the open session viewing area and see the courtroom.

The SAIS group also visited Eurojust, an institution created in 2002 by the European Council that works closely with other organizations such as Europol and Frontex, the European border security agency, and third-party states to combat organized crime, drug and human trafficking, terrorism, fraud and corruption. At Eurojust, the group met the Head of Communications and External Relations who talked about Eurojust’s increasing relevance in Europe, key cases since its inception, and the future of the organization including negotiations to become an organization of the European Commission. After the visit, SAIS Europe student Fabio Iannuzzelli said, “As an International Law concentrator interested in the relationship between good governance and human rights protection, the visit to Eurojust during the Hague trip was an extraordinary opportunity to learn more about European cooperation and coordination mechanisms to fight against corruption and organized crime.”

Next post Faculty Interview: A Discussion with Paul Armstrong-Taylor
The SAIS Observer Staff