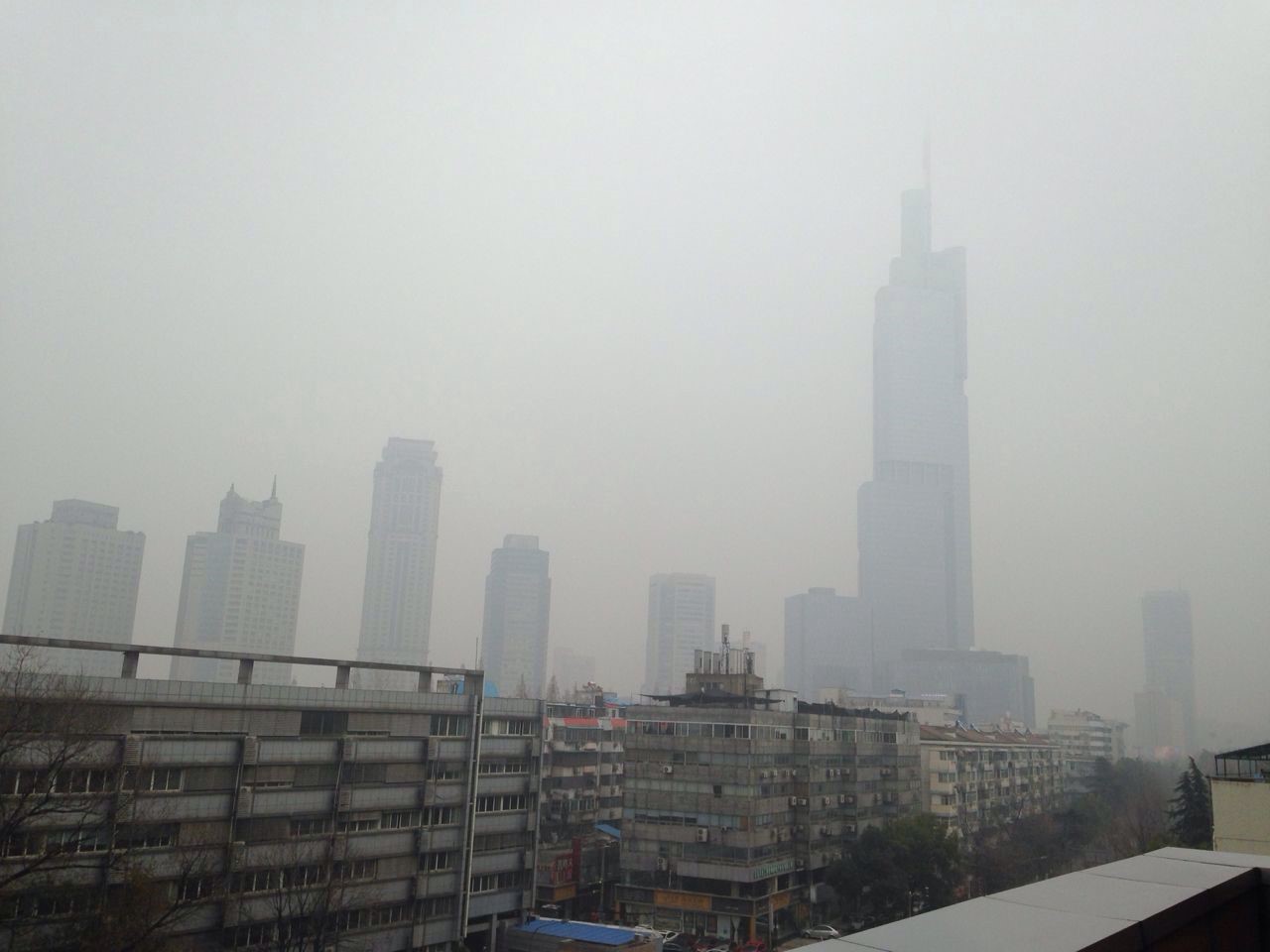 Recently, pressurized canisters of fresh Canadian mountain air were sold in polluted Chinese cities. While Western expats are often amused by the latest trends and fads that arise in their Asian host countries, the recent seasonal jump in pollution levels across China just might cause them to jump on this bandwagon.

Severe air pollution is a notorious side effect of China’s rapid economic rise and has long been bemoaned by expats. After last year’s release of the Chinese documentary “Under the Dome” by popular Beijing journalist Chai Jing, local Chinese citizens have become aware of the gravity of the problem as well. Often hailed as China’s own version of “An Inconvenient Truth,” the documentary immediately went viral after its release. Its exposure of China’s extensive coal use and weak environmental governance spurred so much unanticipated public outrage that the Chinese government quickly censored it online, despite initially encouraging its viewing.

China’s severe air pollution extends well beyond highly publicized cities like Beijing. In fact, this past winter, students at the Hopkins-Nanjing Center waged their own war against indoor air pollution on campus. The capital of the affluent coastal province of Jiangsu, Nanjing is a Tier 2 city with a growing populace, increasing modernization and ever-higher levels of contaminants in its air. For the past 30 years, it has also been home to the Hopkins-Nanjing Center, a program jointly administered by Nanjing University and Johns Hopkins SAIS. Although the 2015 school year began with clear blue skies, a sudden spike in AQI levels (shorthand for Air Quality Index, an indicator of air quality that measures the concentration of various pollutants in the air) in mid-December unsettled many HNC students. Some began to take matters into their own hands, especially because they felt the administration’s response lacked appropriate urgency.

The initiative began when international students Victoria Wu and Matthew Geraci realized that much of the Chinese student body was unaware of the severity of the air pollution in Nanjing, where AQI readings in winter routinely measure at moderate to severely polluted levels. They organized a viewing of “Under the Dome” with an introduction and Q&A session in order to raise awareness and clear misconceptions. As air quality worsened throughout the winter, both Chinese and international students found that the higher air pollution levels coincided with their deteriorating health. Several students complained of side effects including headaches, stinging eyes, congestion, fatigue, insomnia and other respiratory problems. Prolonged discomfort and a slow response from HNC administration prompted students to begin measuring the indoor air quality on their own, especially in public areas. Their efforts culminated in a petition signed by more than 50 students urging the administration to do more to improve indoor AQI at the Center.

Certificate student Gayoung Kay Park purchased an AQI reading device and volunteered it for the students’ research. Students took the AQI reader to the newer academic building, dorm rooms, the fitness room and the student lounge; in short, the places where students spend a majority of their time. The results were shocking: despite the expectation that indoor air quality would be cleaner than outdoor air quality, the data actually found that indoor AQI readings were often equally unhealthy to, or worse than, the AQI levels outside. To the students’ dismay, the dorm fitness room was found to have the highest levels of pollution in the HNC complex.

Furthermore, although the newer academic building — which houses classrooms, staff offices, the library and study conference rooms as well as international faculty residences — has an air purification system, the AQI readings did not show significantly better air quality there on severely polluted days. Students hypothesize that ventilation and insulation issues, along with local staff and local students’ preferences to open windows for air circulation, are to blame. Students reported that on especially polluted days, the particulates are even visible in the dorm hallways.

One five-semester student who has not lived extensively in China before noticed the pollution’s effect on her academic performance. “Since the recent rise in AQI, I have felt tired all day, every day. This past week the AQI was so high, I had a constant migraine and couldn’t focus.”

Five-semester student Catherine O’Connor, who previously worked in China’s relatively pollution-free province of Yunnan prior to attending HNC, attributes a consistent low-level cough she has harbored since the start of the semester to unhealthy AQI levels indoors. “During the prospective student inquiry process, I was led to believe that the dorms had filtered air,” says O’Connor. “It’s particularly frustrating because [Certificate and first-year MA] students are required to live on campus.”

The administration’s response has left many students questioning its priorities. “The fact that the carpets, key cards and lighting were changed but no upgrades in air purification equipment were made is confusing,” said one student, who wished to remain anonymous.

Leaders of the student initiative have already discussed their concerns with HNC administration. The HNC and Nanjing University administrators have since commissioned a study on how to improve air quality in the older dorm building, but the study has not yet been completed. To date, the administration has installed two air purifiers in the student lounge, but whether and when additional upgrades can be made is uncertain.

For now, many students are left fronting the cost of air purification systems in their dorm rooms themselves, purchasing air purifiers and filters at their own expense. Many international students have spent up to 900RMB (roughly 140US), not including the cost of replacement filters. Students have resorted to other DIY methods as well, such as using materials to seal dorm windows in an effort to improve insulation. Some students have also taped air filters to their heating vents to try to filter the air that passes through the heating system. Chinese e-commerce websites like Taobao have been a source of ideas for these innovative students.

Environmental issues are a hot topic in international affairs. The HNC opened a new concentration in Energy, Resources and the Environment (ERE) just last year. HNC students are not only learning about pollution control mechanisms and environmental policies in the classroom, but are also experimenting with pollution control in their daily lives. Geraci and Wu, the students who began the HNC AQI improvement initiatives, say they want more thorough administrative action, not only for their own health and that of their classmates, but also for future HNC students.

International faculty who live and work full-time at the Center have also voiced their concerns. American ERE professor Roger Raufer, now in his second year at the HNC, is supportive of students’ efforts. “We have brought this issue up in meetings since last year and the administration is currently evaluating plausible options. The problem is that the progress may not be fast enough,” said Raufer. He notes that there are a variety of issues to consider which are delaying swift action, including costs, technical-logistical matters regarding new construction, as well as the contract renewal between SAIS and Nanjing University. Raufer believes that the administration wants improvements just as much as the students do, but has different interests and priorities tying its hands.

Reducing air pollution is not an impossible endeavor. The smog Los Angeles in the 1950s and ’60s was infamous, so much so that balloons full of “clean desert air” were sold then, just as Canada’s mountain air is sold today in China. Ultimately, pollution control measures enforced by the EPA in the ’70s and ’80s greatly reduced air pollution in the United States. Recently, the Chinese government has also launched a broad range of new environmental and pollution reduction policies aimed at curbing air pollution in the country. It remains to be seen whether and when their actions will lead to substantive results. The recent success of the COP21 in Paris is a promising sign that China is committing to change. Hopefully students at the HNC will be able to reap the rewards — and soon.