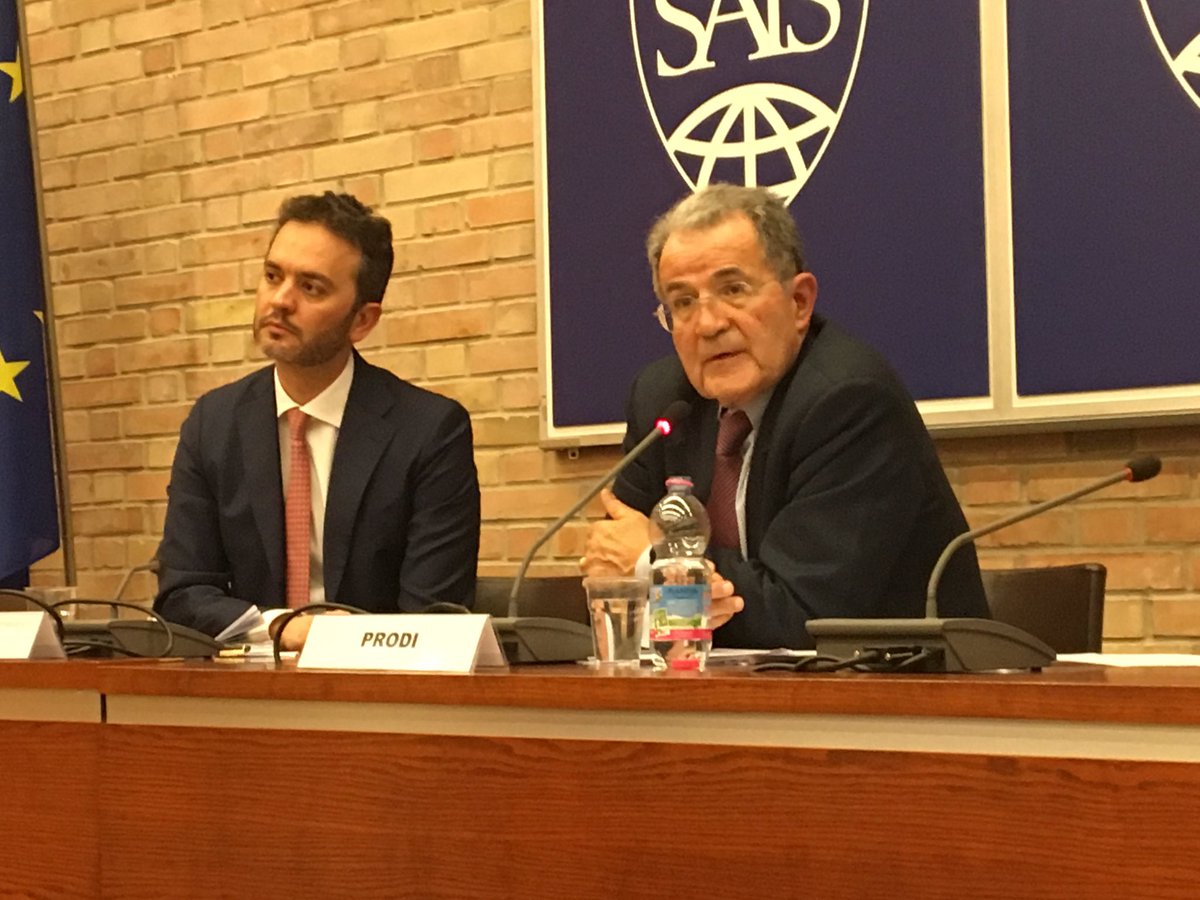 By UTPALA MENON and ILIAS KALOTYCHOS

It was about 6:30 pm in Bologna, with the sun finally showing signs of setting. Another long Tuesday had taken its toll on a group of tired Bolognesi.

Nonetheless, they packed the auditorium for a rare conversation presented by  the Bologna Institute of Policy Research last week.

The conversation began with a simple question from a student in the audience:  “Do you think this is the end of the Euro?” President Romano Prodi, the former Italian Prime-Minister and President of the European Commission, gave an unequivocal answer.

After an illustrious career, Prodi has settled in Bologna, though he continues to serve as the U.N. Special Envoy for the Sahel and teaches economics at the University of Bologna where people affectionately refer to him as “Il Professore.”

On the evening of April 4, BIPR invited Mr. Prodi to engage with SAIS students in a conversation related to the future of the Eurozone. He sounded a hopeful, if overly optimistic stance on the present state of European affairs. Largely, he drew on his experience with migration from Sahel as a microcosm through which to consider the rise in populism both in Europe and across the globe. The SAIS Observer sat down with President Romano Prodi shortly before his conversation to discuss these issues in more detail.

The SAIS Observer: What is the state of the European Union, seeing as we have had the triggering of the Article 50 in the U.K. and the continuous discussion over political populism?

President Romano Prodi: The European Union in the last years has been losing strength and speed. The steps taken by the union have always been difficult. However, the differentiation of the member states had been increasing until the first breakup that was Brexit. And such a development is important because half of the world was looking through Europe with “British glasses”.

Britain has always been trying to get increasing differentiation from the EU. I am very sad for the Brexit. It was unexpected but not a surprise, if perhaps we can put it this way. Then we had Trump; for the first time, an American president puts himself openly against Europe.

Nonetheless, in my opinion it is the start of the European recovery, in the sense that Angela Merkel, who is the leader of Europe in this moment, agreed on the proposal of different speeds in Europe: multiple speeds and enhanced cooperation. “We cannot be altogether, because it is a moment that international policy mix-ups are different, but we go on forward with the countries that want to be together.” And, this is important.

TSO: During your presidency, we witnessed the further integration of countries into the European Union. Has this deeper cooperation and integration been betrayed in recent months by the apparent lack of confidence in the union?

PRP: Europe right now is not at its best. At the time [of my presidency] you had the idea of integration that was important, but now you have this strange unsettlement between Russia and the US — that I hope will change — that influences the countries. To this international phenomenon, the reaction cannot be the same for all countries. The reaction of the Baltic states is not going to be the same as the reaction of Italy. But in regards to a further disintegration process, I do not believe that Brexit will be an example for more countries to follow.

TSO: You have played a big role in incentivizing the EU in regards of the Sahel countries. Could the EU help the Sahel and the southern Mediterranean countries?

PRP: The south Mediterranean countries were regretting that my attention was only to the North and Northeast and this was my biggest nightmare. My answer was honest and in good faith: ‘look, this is a historical necessity, the empty space from the fall of the Soviet Union obliges us to act immediately’.

Most of my personal proposals in favor of a systemic policy to the South were met with the denial of Northwestern European countries, claiming that initiatives towards the South would have been money wasted. I am convinced that we have an obligation to both the Sahel countries but also with the countries struggling with immigration at the moment.

Considering Sahel in particular, we need to have a systemic plan for development and cooperation, because the reasons for immigration are irresistible. In addition to that, the biggest countries in Europe, population-wise, are facing significant problems with their birth rates. The rate is close to 1.39 births per person in Europe, while in Sahel it is much higher. The people in the Sahel countries are facing vast problems, so they are trying to find a way out.

An additional problem is the Libyan war, which makes migration unpredictable and less manageable. Even if the war were to stop tomorrow, the problem would still exist. Europe is afraid of the domestic political aspect of migration, and it is seen only in a national perspective.

TSO: Can the Europe hope for further cooperation to combat the challenges?

PRP: If you ask me whether all the European countries are willing to do that then I would answer no. But I believe a partial agreement among countries and a partial plan on immigration can be placed forward.

TSO: Can the European Union look to China in order to further relations that would help its economic situation?

PRP: It all depends on the American policy. If Trump implements the policies he claims, then the EU is obliged to look to different outlets for economic cooperation, such as China, India or Africa. In terms of quantity, China is the most feasible alternative. Already the trade between Europe and China is increasing more than the Atlantic one. I honestly cannot think that the American policy will follow the declaration.

But in any case, the new paths for trade will not be created by new trade agreements. The era of TPP, TTIP, NAFTA, EFTA is over. The new agreements will come through bilateral agreements. You saw how difficult the agreement between Europe and Canada was. The agreements will be on limited and targeted economic policies.

TSO: Given the G7 talks, will these talks about trade and cooperation be brought up to the discussion?

PRP: Having participated in ten G7s, I can say that nowadays the influence of the institution is withering. It is no longer, as you know, a G8 summit. The world is changing, and the G20 is more important than the G7 or G8. So no, I don’t think that the G7 will make decisions. Perhaps, it could show orientations, or a clearer American view, but I do not believe that any kind of formal decision will be taken.

TSO: Could we see, in regards to seeking alternatives as you mentioned, Europe reengaging with Russia in the near future?

PRP: There is a strange event in the last weeks: an increasing distance between Russia and Europe. It had never happened in the past that the Russian President would meet with such disruptive leaders as Le Pen or the Minister of Foreign Affairs with the leader of the Northern League. If you take the latest events together as a whole, you have a Europe that is unsettled from East to West and does not have a sense of togetherness. Again, I was absolutely shocked by the fact that the leader of the populist parties was so warmly received in the Kremlin, because in Russia these kinds of initiatives are not random in nature. They have their own political meaning. It was a signal from Russia that perhaps “we can damage you more than you can damage us with the sanctions”. It is a sign that Russia wants to go in the interior policy of Europe. Putin is a rational player in terms of foreign policy.

TSO: As a last note, are you optimistic about the future of the Euro and the European Union?

PRP: I think that there will be no other disruption, in regards to any other country wishing to leave [the union]. Optimistic is a strong word for the Euro; I‘ll simply telling you that the elections in France and Germany will help Europe. We never had, in France, a candidate with such a strong European platform, such as Macron.

In Germany, the increase in strength of the Social Democratic Party has shown that the two traditional parties in Germany, which clearly have a European agenda, are stronger than they were a few months ago. I do believe that this year will be a year of non-decision due to the elections in both countries. We could also see some enhanced cooperation in Europe, but it would be difficult to see it as a Europe of solidarity. Europe has changed, with Germany having a greater influence in the EU, while on the other hand there isn’t a supranational body that can leverage the power of the nations, like the European Commission was in the past.

The European Council dominates Europe and in the Council, of course, the stronger states have greater influence. If you take the Greek case, for example, it wasn’t a negotiation between Athens and Brussels, but a decision between Berlin and Athens, to delay the final decision due to the North Rhine-Westphalia elections.

This is not the paradigm of a traditional Europe. It was the concept of a decreasing power for us in Europe. After Great Britain decided to hold a referendum to leave the European Union, the only “umbrella” that was left open was Berlin. So, the balance between the European powers became uneven due to this change. With enhanced cooperation, perhaps we could move forward from this problematic situation. For example, in the case of defense cooperation among European states, France could play a vital role, as it is the only country with nuclear capability and a veto right.

Utpala is a staff writer for the SAIS Observer. She is an MA student concentrating in International Law and Organizations at SAIS Bologna.

Ilias is also a staff writer for the SAIS Observer. He is an MA student concentrating in Conflict Management at SAIS Bologna. You can find him on Twitter at @IliasKalotychos.

Previous post Is China Splitting From Europe Over Carbon Trading?

Next post That School Across The Street: the Differences Between American and Italian Universities
The SAIS Observer Staff