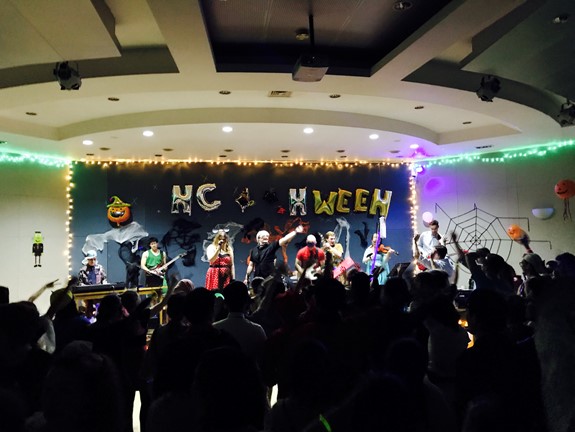 NANJING – Halloween came early this Saturday at the Hopkins-Nanjing Center with a night-long celebration for the students and staff. The event featured music, a live band and a gift card raffle. Costumes were mandatory for attendance and did not disappoint. Highlights included a full-piece Winnie the Pooh costume, Daenerys Targaryen, and Rorschach from Watchmen.

Attendees voted on awards such as “scariest costume” and “funniest costume” for a Center-wide costume contest. Winning “most creative” were Sun Yi and Anneliese Gegenheimer for their pairing of Frozen’s Anna and Elsa. Gegenheimer explains, “Sun Yi had never done Halloween before and wanted to dress up. I wanted something where we were sisters because we’re roommates, and was trying to think of something she’d know that’s also famous in China. I said Frozen, and it just worked.”

The Hopkins-Nanjing student band took the stage at 9 p.m. The set-list featured seven songs, including Halloween classics like “Monster Mash” and “Thriller,” as well as some non-holiday hits like “Toxic.” To prepare, the band practiced twice a week for about a month and every day in the week leading up to the party. Bassist Joel Forsstrom’s favorite song to play was “Uptown Funk” because the band’s version had solos for the drums, guitar and bass. The song ended with a three-minute extended jam session. “Thriller” was a hit among the American students, including Brian Hart. “I always love Thriller, because that’s the most Halloween-y song ever,” he says.

The Hopkins-Nanjing Center ‘banwei’ committee (a student council consisting of elected international and Chinese students) organized the night’s festivities. The committee spent the majority of Friday and Saturday putting up $200 worth of decorations, including a spider-web wall where party-goers could take pictures.

The Halloween celebration was relatively unique as the holiday is not widely celebrated in China, though it is becoming more popular according to Certificate student Mao Tingting. Gao Yaqian, a master’s student, notes the growing popularity of Halloween, Christmas and Valentine’s Day in Chinese culture, since “businessmen have a great opportunity to sell things, and people like to have fun and go to parties.”

Next post At China’s Party Congress, Xi Jinping Is the Life of the Party
Ishani Srivastava

BY UTPALA MENON On Monday, October 10, Ratna Kapur joined SAIS students for a conversation on her area of expertise:...