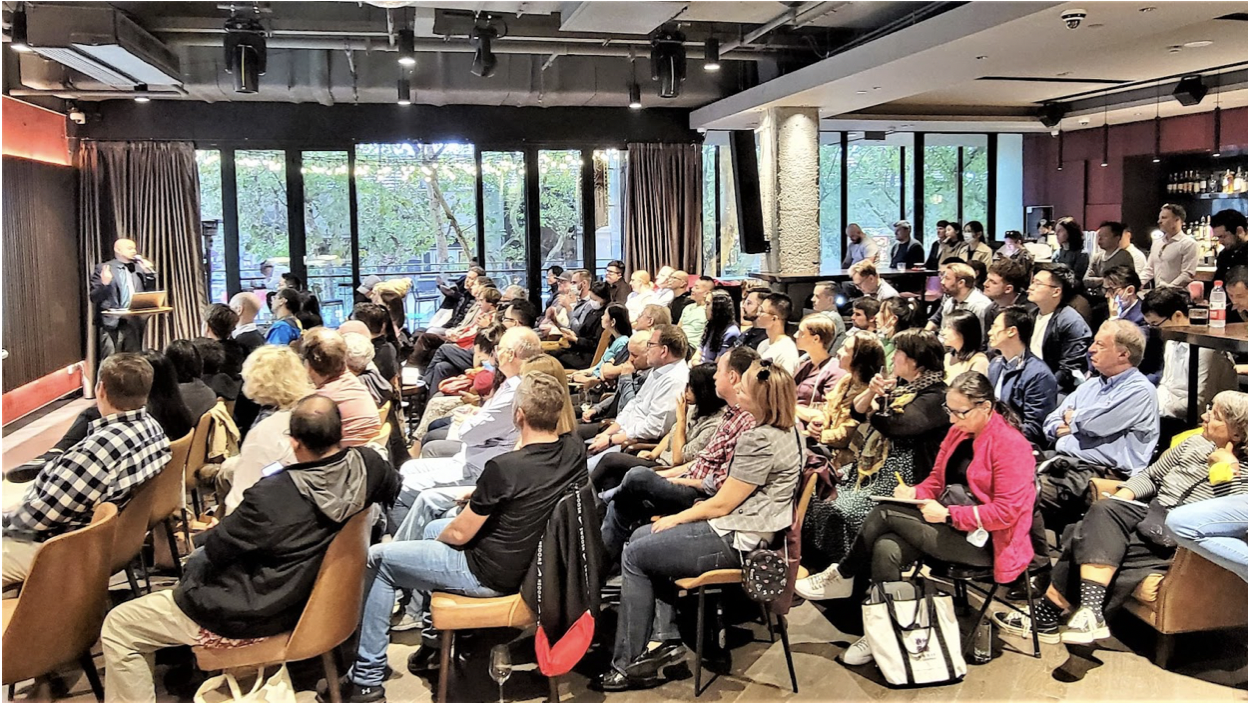 Part One of Three in Discussion with Frank Tsai, HNC ‘03

I recently sat down with HNC alumnus Frank Tsai for a wide-ranging discussion on intellectual life in Shanghai, entrepreneurship, generating civil society, and work prospects in post-covid China.

Tsai is the founder of China Crossroads, an events company hosting around seventy talks a year on “China and the world,” whose cornerstone idea is that China is now both a “crossroads” of the world and “crossroads of global influence.” In Shanghai, a city of 28 million, China Crossroads is its largest platform for public lectures. Roughly a third of the talks focus on business and a fourth on international affairs, but a wide array of other topics are also explored.

While his company, founded in 2020, is relatively new, Tsai had already been hosting talks for a full decade prior to registering it. The Hopkins China Forum was his first series,  launched in 2010 with support from the greater SAIS alumni community. Thereafter came M Talks China, Thinkery, and the Shanghai Social Studies Colloquium (SSSC), with titles of talks ranging among them from “Is China Really an Unfair Trader?” to “Fear, Anger, and Pathos: Reclaiming My Soul in China’s Gilded Age.”

After more than a decade of fostering community and moderating open dialogue in authoritarian China, Tsai has much to share and recount, perhaps too much to digest in one sitting. This interview will thus be published in three parts:

(The following transcript has been edited for length and clarity)

Is there something about Shanghai that made it a better city than anywhere else to host your various lecture series? Do you think this is the most open city to be hosting all of this in?

There’s definitely a Shanghai aspect of this – there are more expats and returnees here than anywhere else in China. My audience are mostly expats and Chinese returned from work or study abroad. Beijing has a lot going on too – there’s more (than in Shanghai), and it’s more fragmented.

Furthermore, Shanghai is an open city. We like to mix; we like to meet people from different backgrounds and nationalities. I’d like to think Shanghai is more open than Beijing, which is a little more about your own clique and your own crowd.

One frequent attendee of your events has said that, notwithstanding the acumen for business found widely throughout this city, the kind of people who really grasp or are striving to grasp China’s role in the world are best found in Beijing. Are you pretty satisfied with the kind and quality of audience you’ve developed here?

When it was the Hopkins China Forum from 2010 to 2020, in conjunction with the alumni club and SAIS Alumni Development, it was really more about international relations. But when (in 2020) I formed my own business, I couldn’t continue that same format due to the tightening political environment and the need to appeal to a wider business audience. So now talks are at least a third about business and maybe only one-fourth on international issues. There’s not as much demand for the latter as there used to be.

This new formula has still worked, though, because Shanghai is a business town and we like to network. I don’t think of Beijing as being much of a networking town. I was once at an event in Beijing back in the days before WeChat, and I wanted to give out my card. For whatever reason it didn’t seem like the right thing to do. So that’s just my little insight about Shanghai and Beijing.

Also, I feel that Shanghai has that Hong Kong and Taiwan crowd that there isn’t as much of in Beijing, which is an important factor. We have a significant number of Hongkongers coming to my events.

As mentioned in the introduction, you don’t have a single event series. You’ve created and presided over five of them!

Right! There’ve been about 500 total public talks since 2010. The most prolific series has been China Crossroads with about 200 talks, but very close to it was the Hopkins China Forum with around 150 talks last time I checked. M Talks China was quite prestigious since the Shanghai Literary Festival was also hosted at the same venue, the prestigious M on the Bund, for many years. The Thinkery was more like an open mic night for anyone who wanted to talk, which was quite fun.

People say, “Wow, you were very brave to start a business in the pandemic!” But I always knew that people would come since I’d been doing it so long and I already had a very large audience base.

When you were starting back in 2010, was there some kind of grand strategy where you planned to have a forum for a certain kind of content, another forum for another kind, when and for how long each series would run and so on? Or did all of this just evolve through feedback and adjustment?

I’m actually anti-planning and anti-vision, although vision is a great buzzword. I had never planned to be someone involved in events. I don’t think I went to many events before I started doing them. A lot of it really has to do with the SAIS Alumni Club in Shanghai. I got my first job in Shanghai through someone I met in that club, and I thought there ought to be a way for us to gather. So that’s how the Hopkins China Forum really started.

Our first Hopkins China Forum talk was hosted together with Young China Watchers, featuring Daniel Bell, a well-known philosopher in China. Our second speaker was Ken Jarrett, who was American Consulate General and remains one of the most important Hopkins-Nanjing alumni in Shanghai.

The Hopkins China Forum, 2010-2020, was alumni-branded with great alumni participation, but it was always an open platform. Using the Hopkins brand wasn’t part of some grand plan but it was a good decision. It did help us to get more people interested in what we were doing. Moreover, over the years at least a dozen attendees applied to SAIS (Nanjing or DC) after hearing about SAIS through the talks, and many of these have attended and graduated.

Interesting. So you’d actually credit SAIS for helping to create your community?

I feel like I’m talking to the administration now, but I do have things to say.

What’s interesting is making a comparison with the alumni club at Harvard. They’re more hands-on and have real funding, but there’s advantages to a hands-off approach. I would get support with speaker suggestions, especially in the days when professors would come over to visit China. It was mutually beneficial.

Again, the lack of any real direction in terms of funding sounds like a negative, but it was a positive! Since the alumni club was hands-off, I could do what I wanted but still coordinate with them. We actually had a planning meeting in 2017 in Hong Kong with Dean Vali Nasr to promote more alumni events and engagement throughout Asia. It’s nice the school does that kind of stuff.

It’s a bit of a side note, but I’m very impressed that, among the 500 events to your name to date, the majority were executed while you had an intensive full-time job. How have you managed to exert such energy and to be such a guru of time management all these years?

Keep in mind these are not corporate events, where everything is in a hotel room with hors d’oeuvres and all these other things needing to be set up. These are these talks in F&B venues and bars, so I don’t consider it that difficult to set up a talk.

Honestly, even when I was working it was easy to do this. As a business it’s harder since you have to think about money and promotions. When it was just for fun and free, the venues would just be happy that people would come, rather than charging us a rental fee.

None of it was that hard, really. But I started gradually, going from four talks a year to six, seven, eight, ten, twenty, fifty and so forth.

I’m anti-planning and anti-vision because, had I tried to plan all of this, I may have missed some of the opportunities standing right in front of me.

Looking back on all the talks you’ve organized, would you distinguish any years or eras as more rewarding or intellectually fruitful than others?

Sure, but first, if you want a scoop, here’s a scoop.

I worked for the Economist Corporate Network shortly before the pandemic and, as a brand ambassador for the Economist, I was not allowed to run any of my own long-standing events. I think it’s interesting. They would have benefitted from the network I could have brought to them. Their corporate network is an events business itself, like a very high-end chamber of commerce, hosting events for multinational bosses and CXO’s. But I wasn’t allowed to do my own events since I had to be solely a representative of the Economist for the public. I kept alive one of the series, nonetheless: M Talks China. I did it under the radar since, well, I could.

In any case, there was a pause of most of my events while I was with the Economist, and a pause during the initial covid outbreak in China. So these periods were less fruitful.

I could talk about zero-Covid and China policy forever, but here’s something folks in DC probably don’t know, or won’t hear on CNN: I started an events company during the pandemic. This was when the pandemic was at its worst in the West. And I didn’t have problems making money at all.

So, China did do something right. It gave us a space of two years or so to have a normal life. Of course, we’re suffering now from some of China’s procrastination. But for me, the point stands: no zero-Covid, no business.

People abroad would look at these events and say, “No one masked up.” Right – why would we have to mask up? There were a hundred events held during that time and 1% of the people at them had masks.

Stay tuned for part two of this interview, where Tsai will describe the state of civil society in China in 2022.

For more information on China Crossroads and Tsai’s work, including a record of every talk ever hosted through each of his lecture series, readers may visit http://www.shanghai-review.org/.