In a talk at SAIS Europe last week, Michael Leigh, a consultant and senior adviser at the German Marshall Fund and former Director General of the European Commission on Enlargement, emphasized the enormous pressure that Eurosceptics are currently applying on British politics. Indeed, the European Union is commonly seen in Britain as a vast and sprawling bureaucracy of functionaires conspiring to usurp what few powers have been left at the hands of national governments, and as being inhabited by corrupt officials forever flying between Brussels and Strasbourg in luxurious private jets. The influence of the Eurosceptics is such that British Prime Minister David Cameron was recently persuaded to promise a simple in-out EU referendum, to be conducted in 2017, if the Conservatives win the next general election.

British Euroscepticism is by no means a new phenomenon. The old idea that Britain should live in splendid isolation from Continental politics probably gained popularity during the Second World War, which is still deeply entrenched in British collective memory as a “people’s war”, i.e. as a time of supreme national unity and effort. Partly as a result, Britain did not sign the 1957 Rome Treaty that established the European Economic Community, even though that decision was influenced as much by economic as by ideological considerations. Again during the 1980s, Margaret Thatcher employed Eurosceptic rhetoric amply, even though in reality the 1986 Single European Act paved the way for the completion of the European common market in a way that fit well with Thatcher’s free-market ideology. As Ian Gilmour, a member of Thatcher’s government until 1981, remembered of the Prime Minister’s rhetoric:

“Mrs. Thatcher could at least win some kudos and popularity as the defender of the British people against the foreigner. Hence a running row with our European partners was the next best thing to a war.”

Today, criticism of the European Union is fueled as much by a generally highly Eurosceptic tabloid press as by any other factor. Consider the following front page of the Daily Express, a popular right-wing tabloid that enjoys wider circulation than The Guardian and The Times. Besides describing David Cameron’s promise for a referendum as “the biggest victory” for the Daily Express’s “crusade for Britain to quit the EU” that aims to end “Britain’s disastrous entanglement with the nascent European empire”, the front page also quite seriously features a man dressed up as a crusader standing outside Downing Street and holding a bunch of anti-EU coupons coming out of garbage-bag-like sacks. Unfortunately, this is the level at which a good part of the dialogue about the European Union is conducted in Britain, and this is not so only among the readership of the popular tabloids. During a conversation last June, the first argument that a Eurosceptic fellow student of mine in Oxford put forward against British membership in the EU was that EU human rights legislation allegedly prevents Britain from deporting suspected terrorists such as Abu Qatada. His argument sounded a bit like the Daily Mail’s 3 January 2013 headline, “4000 foreign murderers and rapists we can’t throw out: and yes, you can blame human rights again.” 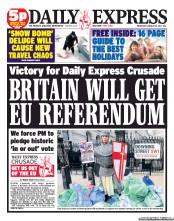 Britain also has a single-policy Eurosceptic party, the UK Independence Party (UKIP), which, as the EU Commission President Jose Manuel Barroso recognized in his final State of the Union Speech this week, is likely to win the next European elections in Britain. UKIP’s leader, Nigel Farage, is a fantastic orator, but unfortunately the quality of his rhetoric does not take the EU debate very far from the level set by the tabloids. In response to Barroso’s address last Wednesday, Farage denied the scientific basis of EU policies on climate change, and, holding two photos of an ice-cap taken in consecutive years that apparently proved a 60 percent increase in its volume, pretended that he had proof beyond doubt that the world is entering a period of “global cooling”.

What does this dire level of EU-related political discussion and the rise of populism and Euroscepticism in Britain mean for the future of the European Union? As Michael Leigh argued, the most likely outcome of an in-out EU referendum in Britain would be that Britain would stay within the Union. David Cameron will probably negotiate some alterations of the terms of his country’s membership, and given the lack of a coherent alternative to EU membership, as well as the high costs of exiting a dense institutional setting like the European Union as described by neoliberal theory in international relations, the Prime Minister will be able to secure a favorable outcome in the referendum.

However, this should hardly be a cause for relief for the pro-European camp. The problem posed by the phenomenon of unabating Eurosceptic populism goes much deeper than the outcome of one referendum, and has more long-term consequences. After forty years of British membership in the European Union, not only has a European identity of sorts not become entrenched next to the national identity of Britain’s citizens, but also resentment of Europe seems to be constantly on the rise. This is a very alarming situation indeed. The European project cannot succeed in the long term without a strong popular basis. Countering the language of Eurosceptic populism is very hard. It is hard to answer to the emotional language of liberty and national independence with rational and technocratic arguments. It is hard to make the multi-lingual European Parliament appear as news-worthy as a good-old heated debate in the British House of Commons. But unless the pro-European groups everywhere in British society and beyond make a coherent effort to provide a clear vision about the nature and the future of the European Union, the devastating effects of rampant Euroscepticism will become increasingly hard to reverse.

One thought on “On the Meaning of British Euroscepticism”

Previous post Marching Across the Caspian: The Geopolitics of Oil in Kazakshtan and Azerbaijan