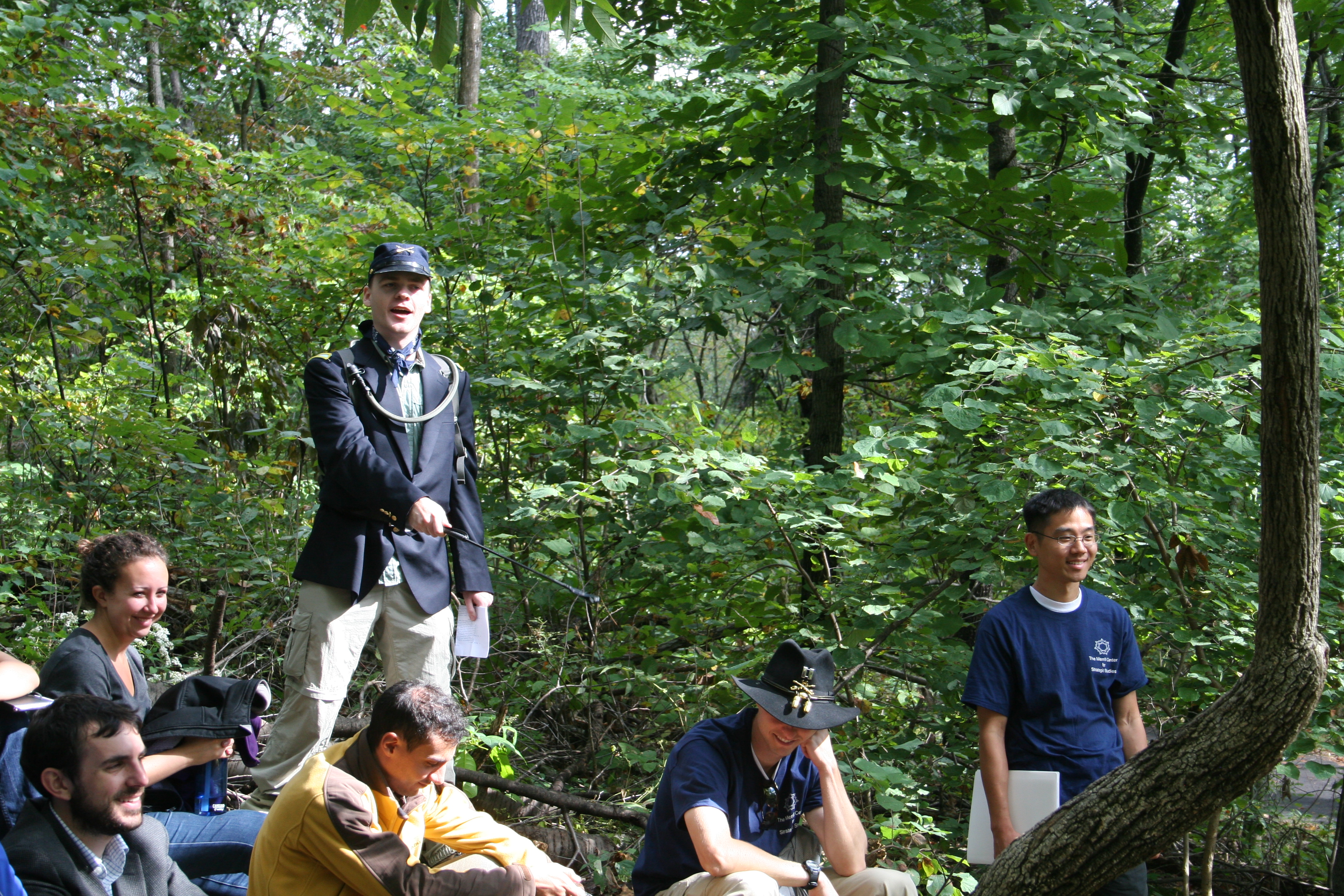 On September 21, while most of Washington slept, over sixty students descended upon the Nitze lobby with backpacks and sleeping bags in hand ready to commence this year’s Fall “Staff Ride” to Gettysburg, Pennsylvania — marking the 150th anniversary of America’s Civil War battle.

A SAIS tradition dating back to 1990, these student-run excursions take learning to the terrains of war — in this case, the hallowed grounds of Gettysburg where strategy, leadership and military decision-making were intimately discussed at places such as Devil’s Den, The Peach Orchard and Little Round Top.  A chartered bus and passenger van shuttled the group — students, a half dozen faculty, university leaders and special guests — throughout the carefully planned two-day trek.

The South’s invasion of the North in 1863 was the trip’s focus.  Staff rides like these accomplish several goals.

“In the narrow sense, they teach students about the nature of military decision-making, about choices…how to make them better or make them worse,” said Eliot Cohen, the Robert E. Osgood Professor of Strategic Studies and founder of the Staff Ride Program. “The larger purpose is really to get students thinking in quite a broad way about leadership in non-military settings as well.”

Presentations, which last five minutes but require hours of research, are integral.

“From the very beginning, I have put a lot of emphasis on the student presentation…that people do it in the first person,” Cohen said. “They really just have to imagine themselves being General Lee, General Meade, or President Lincoln, or whoever it is, so they can really imagine the world as seen by somebody else.”

Andy Feitt, a second-year Middle East concentrator, played Lincoln. “I spent several hours reading both the recommended readings and others to really get a sense of why he took the actions he did at the beginning of 1863.”

After each presentation, hands flew into the air, followed by questions about the presenter’s situation.

“It really enables the students to put themselves in somebody else’s shoes, and to try to think through a very difficult leadership problem from somebody else’s point of view,” Cohen said.

Will Quinn, a first-year Strategic Studies student from Boston, empathized with many characters. “I was surprised at how deeply the staff ride made me empathize with leaders on both sides of the conflict and understand their decision-making processes, even if I didn’t agree with their choices or many of their motivations,” Quinn shared.

Crucial to these trips are the research and logistics teams. “We could not have done it without our staff,” Nate Rozelle, a second-year student and one of two Quartermasters with Mike Youn, said. “They put in so much time. They really were the backbone of the trip.”

Students agreed. “I knew nothing about my character before the trip and wasn’t sure how his story fit in with the battle,” explains Daniel Flesch, a first-year Strategic Studies concentrator. “But the researchers did an incredible job choosing characters, from generals to presidents to privates to civilians, that everyone’s character was integral to the trip.”

For Anne Gillman, a second-year Southeast Asia Studies concentrator, the trip was more than just learning. “A memorable part was visiting the monument for the 146th Regiment from the Army of the Potomac, in which my great, great, great grandfather fought.”

Shamila Chaudhary, Special Advisor to Dean Vali Nasr, also attended. “I was so impressed with the effort and research interest that the students put in without it being a course credit. That takes a lot of dedication, and that says something about the SAIS student community.”

“In these circumstances, I particularly applaud the performance of the students in their presentations, their camaraderie, and in the positive attitudes displayed throughout,” Thomas Keaney, executive director of the Philip Merrill Center for Strategic Studies at SAIS, said.

Both days started at 6 a.m. and involved hours of walking with over forty presentations. Despite rainy weather on Saturday, everyone warmed up at Artillery Ridge Campground around the campfires. Students sang songs under a rain-drenched tarp, mingled informally with faculty, encircled charcoal grills under umbrellas and carried on conversations late into the night.

On Sunday retired Marine General John Allen joined the discussions, a highlight for many.

“What an extraordinarily valuable opportunity for students,” Cohen said. A group dinner concluded the trip in which faculty offered leadership takeaways and the quartermasters recognized the best presentations.

For those interested in future staff rides, second-year student Lorenzo Bruscagli offered this advice: “Go. You won’t regret it. These are the kinds of experiences that make it worth coming to SAIS.”