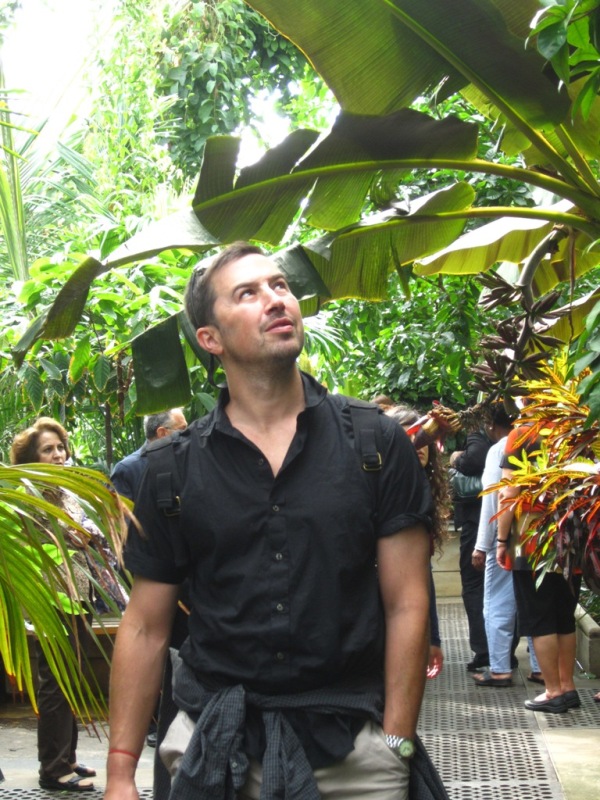 SAIS students will be afforded a treat this coming Sunday when Eric Steiner, SAIS Europe ’95, SAIS DC ’96, will read from his self-published autobiography, On Moon Square, at Bistro Bohem in the Shaw neighborhood of DC.

Steiner’s book, part of his series of works, My Life: What Not to Do, takes readers through a SAISer’s first-hand experiences of the Velvet Revolution in Prague, an American’s perspective on a nascent post-Cold War Eastern Europe and his time at SAIS.

Steiner, who currently lives in Baltimore, Md., and is the founder and owner of his company, EarthBrew: Compost with a Kick, describes his autobiography as “a true narrative about a “normal” guy on a “normal” path [and] journeys to abnormal places, not just geographical.”

“The journey,” he writes for the book’s jacket cover, “back to peace of mind is the true odyssey with the usual stops along the way: sex, drugs, rock & roll, politics and religion.”

Given the significant time devoted to the Czech Republic in the book, Steiner is reading at Bistro Bohem, a café and restaurant that serves Czech food and drink and is owned by Czech immigrants to Washington, DC.

Eat the District reviewed Bistro Bohem in July 2012: “Overall, Bistro Bohem is clearly one of the better restaurants in its neighborhood (and in my opinion far ahead of its across-the-street neighbor Shaw’s Tavern) and states its case as a must-visit spot for people from all over the district.”

Food critics from The Washington Post and The New York Times have reviewed the chicken schnitzel as the must-have dish of the restaurant.

The reading will take place at Bistro Bohem (600 Florida Ave NW) at 7 p.m. on Sunday, October 13.  All SAIS students with a valid ID will receive happy hour discounts at the event.

Steiner will also be signing books for sale at the event.

“In came a shaggy local with a cast on his arm—he spotted the empty space at my table and with a nod he sat opposite me. We both looked at his cast lying on the table.

“Auditor. That was my State work, taking shop inventories. But now we’re supposed to fine the businesses not paying the tax. In one shop they broke my arm. Right there in the back room. I just lay there on the floor.” He shrugged, his eyes comically sad. The waitress brought him a whiskey. I asked, “So you’re on leave?”

“Leave?—what kind of leave? I’m unemployed. And what are you, Polish? You talk funny. What do you sell? I haven’t met a Pole who isn’t selling something.”

I shook my head. He said, “Or your parents were from here? They escaped and now you’ve come back to cash in? Makes sense.”

I shook my head again. He asked, “Then what? Why the fake accent? Who are you?”

The auditor smirked. I asked, “No point?” He answered, “Of course not. There’s no point watching this.”

“And you understand it?”

“Completely. We were full of proud Bolsheviks, now we’re full of proud Capitalists. The Bolsheviks grabbed it all up, and now the Capitalists take it. They’re the same person, same heart. You’ve learned something here, spy.” Night had dropped down on us. The new neon buzzed through the city. The auditor melted off into the streets. My own tired feet took me past the New York combat-video gambling bar, where each machine was patronized by western clothed youngsters, though not from any west but this. A white mountain-bike passed me going the other way, its rider spinning calmly. Two men wearing ties stepped from their western sedan and entered past the fatigues-wearing bouncer at the Malibu Klub. Had any of them been there on the square on those cold nights? Where was everyone who had?

Or maybe it was me, maybe I had the problem.