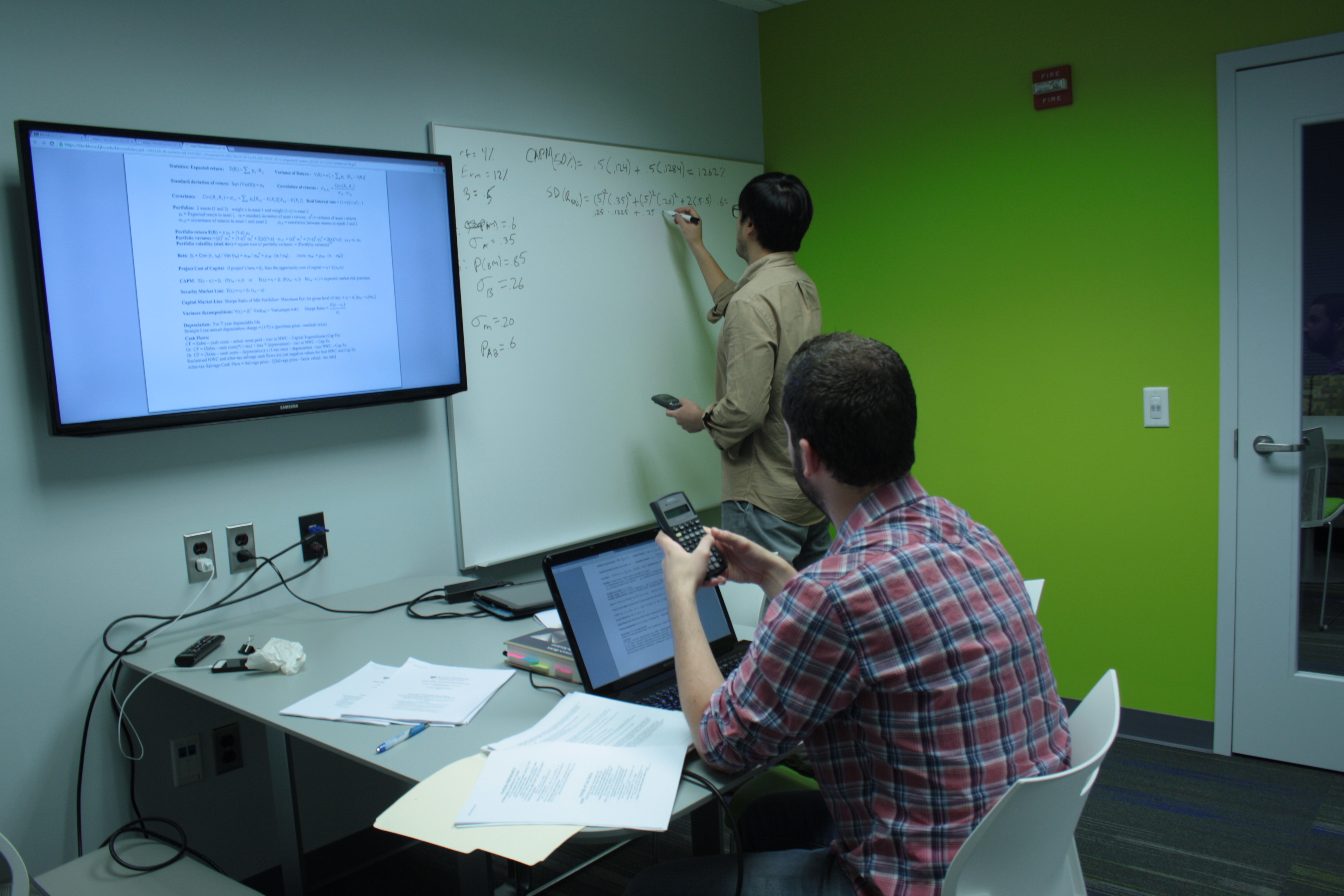 SAIS DC students don’t need to take microeconomics to find out that study space was a scarce commodity here. Everyone agrees that when finals time comes around, it has been hard to find a chair around SAIS.

But that is changing, with last week’s opening of the DC Learning Commons, a study area on the Bernstein-Offit Building’s third floor. SAIS shares the space with the Carey Business School and the Krieger School of Arts & Sciences.

The name is well-chosen – the commons marks a shift from the individualistic study habits of the past to the collective learning of group projects and problem sets. There are still tables for solo flyers, but what sets the place apart are the rooms of various sizes. Each is equipped with a flat screen television and a white board with colored markers.

Students have picked up on the new space very quickly. A particularly interactive group last week hooked up their computer to work on an excel sheet on the flat screen, marked up their white board while talking through a problem and got another group member’s input through skype. It’s a far cry from the cabinet desks along the Nitze library’s book stacks.

The Learning Commons comes as a result of months of intensive decision-making. The third floor of BOB was previously rented out to the Brookings institution. When they left, the school saw an opportunity to respond to long-time student requests for study space. Debbie Walls, SAIS Head of Operations, said that they wanted to avoided expensive construction projects and optimize usage the way things were. Former WONK offices became study rooms and the hallways became the open study area. The only part of the project that required construction was the conversion of a coal closet into an Americans with Disabilities Act (ADA) compliant bathroom.

A glaring legacy of the think-tank is the 310 conference room in the middle of the study area. Brookings left a massive table there because it would be too difficult to get it out of the building. With the light coming down the middle and a pull-down screen and projection device, the room looks like an ideal place to plot world domination, or at least hold club meetings.

A great deal of the preparation was detail work. Representatives of the three schools sat through innumerable meetings to build consensus on things like the brand of chairs and tables. Nathan Hooks, currently Debbie’s assistant and 2012 SAIS graduate’s vote on chairs broke a tie. Nathan’s student perspective is valuable on other issues too. The building no longer closes early on Sundays for example, after Nathan told the administration that Sunday nights are big studying days for students scrambling to get ready for the week.

It may sound trivial, but another new aspect of the Learning Commons is the color scheme. The chairs and carpets in the Commons are decked out with bright greens and blues, which makes for a stark contrast to the Nitze building’s monotone. A group of students all chimed in at the same time when the subject came up, saying that it was an odd look for SAIS. Second year student Max Lohmann (who is known for a penchant for bright yellow and green pants) said that he did not think about it as he first walked in, but the carpets caught his eye later on.

Debbie chuckles when recalling the meetings on the topic. A specialist on school colors came in and recommended the bright hues. “We had never thought through that,” she says, but eventually consensus emerged. “The last thing you want to do at ten o’clock at night is look at brown and green and things that are going to put you to sleep.”

At the end of the day, the DC Learning Commons is part of a broader shift at SAIS. SAIS Europe remodeled its quiet study room into a group study only last year and JHU’s Homewood campus recently set up a similar study area. Across the campuses, the Cold War era’s rigid shapes and habits are gradually giving way to a more colorful approach. Nobody should expect the bookshelves to disappear anytime soon, but it seems that the learning process at SAIS will be more social in the future.

Previous post Image of the Week: Art History in Bologna