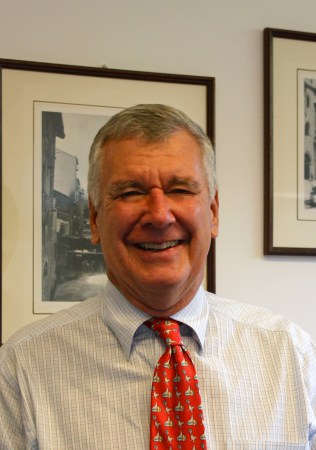 Each year, SAIS Europe draws on experts from all over the world who bring a wide range of personal and professional experiences to bear on academics in Bologna.

This year Professor William Belding, on loan for a semester from the School of International Service at American University, is one of them.

Belding, a self-described “recovering lawyer,” is teaching a class called Weak and Failed States this semester. He has taught the class several times before and says it each time it garners more and more interest.

In fact, the course at Bologna was so popular that to avoid having it go to bid Belding volunteered to offer two sections of the class — both at 8:30 am, no less. He thinks the issue is so important that anyone interested should be allowed to study it.

“I don’t want to deny anyone the opportunity to understand this critical issue,” he said. “The concept of weak states is an

important reality. There are some nations that can’t protect their borders, that can’t provide their citizens with basic health, social and economic infrastructure. So do we leave these states to figure it out on their own, or do we jump in and try to understand it?”

Over the years, Belding has become increasingly committed to understanding the origins and implications of state failure and educating students about the issue. But just how did a former Navy SEAL and real estate lawyer cultivate an interest in international affairs?

As a young teenager in California, Belding was consumed with baseball, surfing, friends and writing and was not exposed to the world beyond Mexico.

It was his military tour during the Vietnam War that first ignited his curiosity about foreign affairs, international conflict and the dynamics that cause states to weaken and fail.

“It started during my first military tour in Vietnam,” he said. “It was such a different culture, with different languages, social structures, there was poverty, conflict, which gave me insight into the state — it was tremendously exciting, and even though we were there fighting a war, I developed a good relationship with my Vietnamese counterparts.”

Belding’s involvement in the war sharpened his interest in examining the nature of conflict, insurgencies and factors that weaken states and make them susceptible to failure and further conflict.

“I realized after my military career that we had forgotten the lessons we’d learned in Vietnam and in international relations, and that was my biggest drive toward teaching; I wanted to pass on the information to anyone who would listen.”

Decades later he headed the Vietnam Veterans of America Foundation, an international non-profit organization that conducts humanitarian work in support of war victims in Africa and Asia. He also co-founded the International Campaign to Ban Landmines, an organization which won the 1997 Nobel Peace Prize.

Eventually, Belding went on to teach graduate courses on weak and failed states at the New School and American University. Now at SAIS Europe, after just two classes, he is convinced that this semester will be exceptional.

“The quality and the enthusiasm of the students is something I’ve never seen before. Without a doubt, the students in Bologna are some of the most interesting and are at the top tier in terms of intelligence.”

“The staff is also amazing,” he added. “Everybody works tirelessly to make sure that the academics are supported.”

In academia, the concept of failed states is controversial and many question the validity and implications of applying that label to certain countries. But Belding maintains that recognizing and examining state weakness and failure is critical to cultivating a rich understanding of conflict.

“States that look as though they’ve failed now, in twenty years may look a bit different; so we have to look at it in a grand scale and understand what causes a state to fail, why are they that way and what we can do about it. And that’s exactly what we are doing in this class.”

In addition to the 10 to 12 hours a week Belding devotes to preparing for classes, he is currently engaged in research on insurgency in Russia and throughout Europe and fills his remaining hours traveling around Italy on the weekends and writing a military thriller.

“I’m excited to be at SAIS,” he said, “the dedication of the staff and the enthusiasm of the students are remarkable. I’m enjoying the experience.”

Next post A Review of the English Proficiency Exam Requirement
sgrosve2