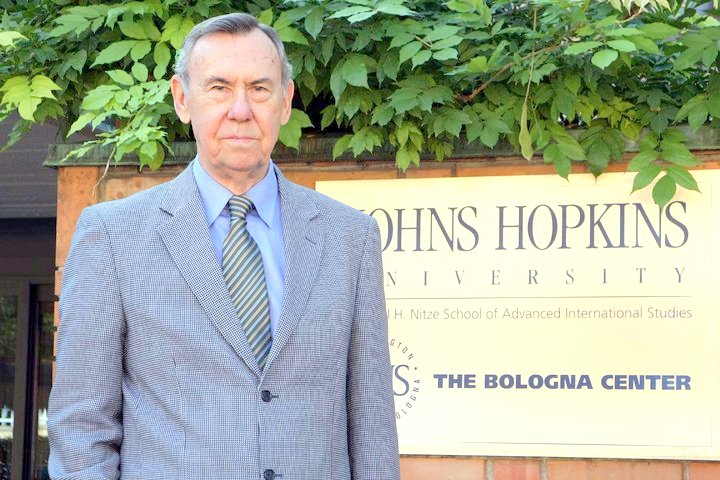 Professor Gary Sick recounted the US experience in the Persian Gulf with a perspective that can only come from witnessing those developments first hand.

Professor Sick took us directly to his days in the Persian Gulf as a Naval officer, to the Pentagon where he was a junior officer and wrote memos for Secretary of State James Schlesinger. In the White House, he was the top Iran advisor and wrote memos to National Security Advisor Zbigniew Brzezinski. He spoke specifically of the Iranian Crisis.

He explained that the Twin Pillars Doctrine, the US’s foreign policy of allying with the two hegemons of the greater Persian Gulf region, Saudi Arabia and Iran, was conjured. It was Iran that the US was interested in.

He explicated that the US sponsored the overthrow of Mohammad Mossadegh in 1953 and went on to tell us about the intimate dealings later between the Shah and President Nixon and Secretary of State Henry Kissinger in the 1970s. He also explained that Iran supplied the US with oil and intelligence on the region. In exchange, the US supplied the Shah with fancy weapons. This was the “Blank Check Memo.”

The US became completely dependent on the Shah for information on developments with the Russians. The Shah became dependent on the US for his appetite for military hardware. Because of the US dependency on Iran, and as there was no back up for intelligence reporting outside of the agreement with the Shah, the US had to maintain this relationship at all costs, Sick added.

Meanwhile, exiled in France, Ayatollah Ruhollah Khomeini had been fomenting an Islamic revolution in Iran, sending recorded cassette tapes of his sermons to supporters in Iran.

Sick recounted that in the years before 1979, he was writing memos to the Ambassador, to Brzezinski and the president about developments in Iran. The ambassador, William Sullivan, came back from Iran reporting that everything was fine, but “I,” admitted Sick, “was reporting on things going wrong.”

Richard Helms, former director of the CIA and former ambassador to Iran, had also travelled to Iran and had all access to the Shah. Helms came back from Iran echoing Ambassador Sullivan’s impression on Iran. However, this information was incorrect as at this time it was probable that the situation was unraveling. The Shah misinformed the US about the real nature of the problems in Iran.

The Shah had been diagnosed with Lymphoma and had been concealing it. On behalf of the ailing hospitalized Shah, General Azhari said, “The country is lost, the king cannot make up his mind.” According to Sick, this statement was most informative of the situation.

Sick went on to outline the unfolding of the Islamic Revolution of Iran, explicating over four different two hour lectures the story of the US relationship with Iran, including the hostage crisis, the Iran-Iraq war as well as the nuclear enrichment activities of Iran.

The impression that is offered by Gary Sick’s telling of globally important events is irreplaceable. Such insight can only be given by someone who worked in important posts in the center of policymakers.

Sick spoke of being atop naval vessels in the Persian Gulf and described the arrangement of destroyers and carriers and how the US moved many ships into the region. What Sick left out of his lectures was what made them engaging. He spent more time recounting his participation in the events and the common wisdom of the time, rather than commenting analytically, which he has all the license to do. In this way he held his audience’s attention and allowed our imaginations to provide the pictures, sites and sounds of the story.

Sick is a Senior Research Scholar at SIPA’s Middle East Institute and Adjunct Professor of International and Public Affairs. He delivers a mini lecture series titled ‘United States in the Persian Gulf; From Outlier to Empire’ at SAIS Europe.

Next post The Nanjing Rockets; How HNC Students are Representing Nanjing Across China
Ishani Srivastava