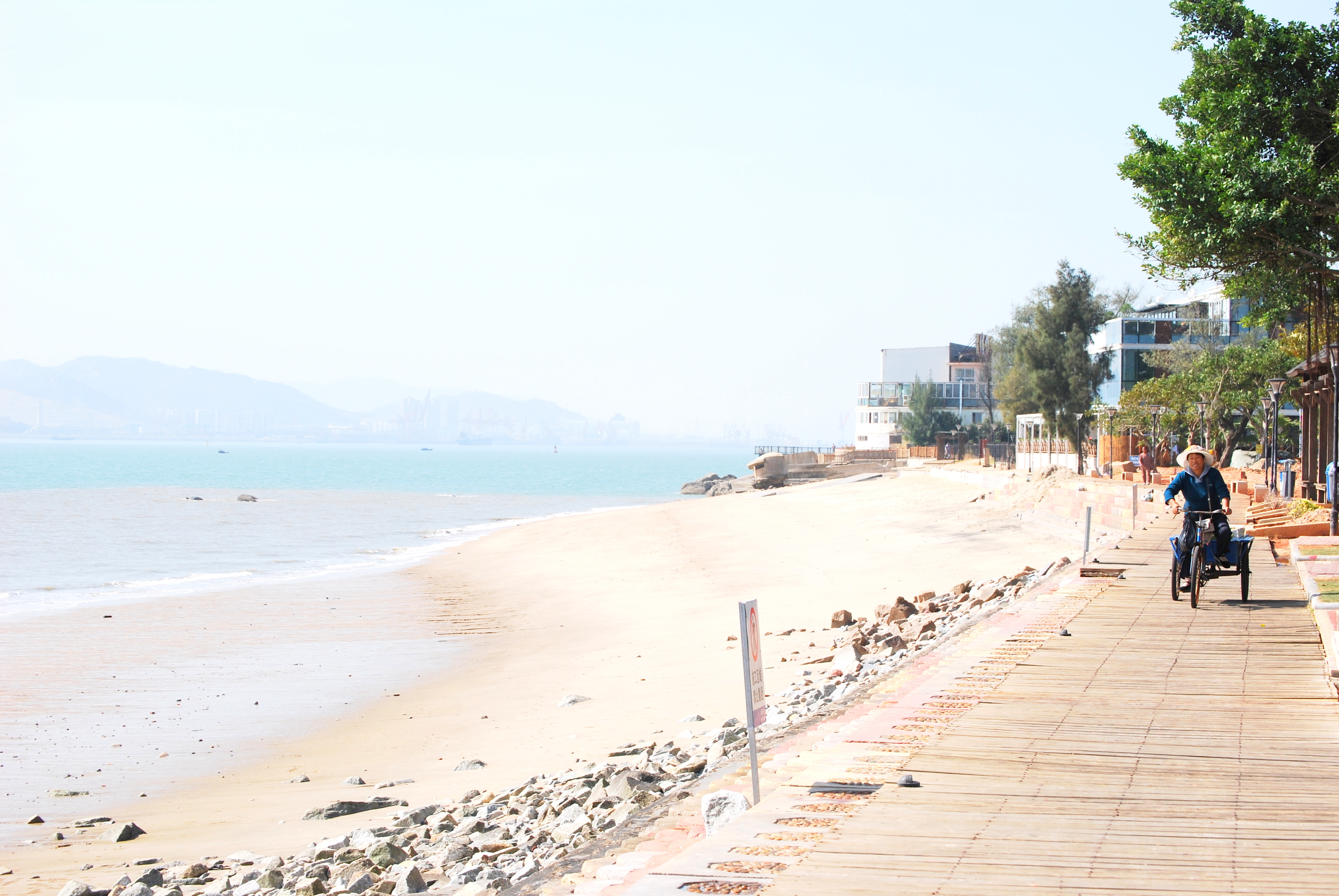 From the sparkling vistas of the Pacific to tiny winding alleys giving the impression that fried snacks, milk tea, and boutique clothing are all one needs to survive, it’s obvious that Fujian Province’s Xiamen City is, as they say, “for lovers.” Mainland’s port opposite from Taiwan has a rich history of playing a role in maritime politics of the region, has numerous cultural offerings, and has become a top destination for tourists, especially those of the young and in love categories.

On our weeklong fall break, six students from the Hopkins-Nanjing Center joined the masses flocking to Xiamen to enjoy fried squid and the smell of the ocean.

Biking around the main island of Xiamen (we rented four bikes and a two-person tandem), we found the “yiguo liangzhi, tongyi zhongguo” sign, a massive red construction of steel pointed across the strait at Taiwan, urging for the unity of China under the motto of “one country, two systems.” On a clear day, the opposite sign calling for the “three democracies” can be seen on the opposite shore, with Taiwan’s Jinmen Island as its home. A discussion of the relations between Mainland China and Taiwan could not be helped as we relaxed on the beach, surrounded by a soundscape of crashing waves and coconut vendors shouting “yezi, yezi!” Another leg of exploration brought us to Hulishan Fortress, built during the first Sino-Japanese War, providing some context to our studies of Chinese foreign policy, particularly in light of the recent renewal of some anti-Japanese sentiment in China. We sacrificed several eardrums attending a reenactment where men dressed in traditional soldier costumes fired a blank from a cannon, and descended back down to the beach.

For two days we decided to leave the bustle of Xiamen’s main island behind, taking a ferry to Gulangyu, a small island boasting over 200 pianos and a notorious ban on motor vehicles. Arriving at night, we wound our way through beautifully variant architecture, some left over from the post-Opium War era, to find our hostel, a quaint brick structure with a roof deck straight out of a romance film. We watched the sunrise from a stone bridge over a cove, explored the Shuzhuang garden with its zigzagging docks and piano museum exhibiting pianos dating back to the 17th century, and ate too much Taiwanese street food. Particularly at Gulangyu, one thing was clear: Chinese tourists are not afraid to have a good time.

No visit would be complete without a stop by the famously beautiful Xiamen University. Breathtaking views of the bay creep up around every corner of dormitory or classroom buildings, and the architecture is a pleasing mix of early 20th Century Western influences and Southern Chinese styles. After a stop at a Xiamen hot pot for dinner and a teashop for a taste of Fujian tieguanyin (a type of oolong), we were on our way back to Nanjing, filled with the romantic and relaxed life and fresh air of the seashore.

Previous post Discussing Failed States; What is the Concept Good For?