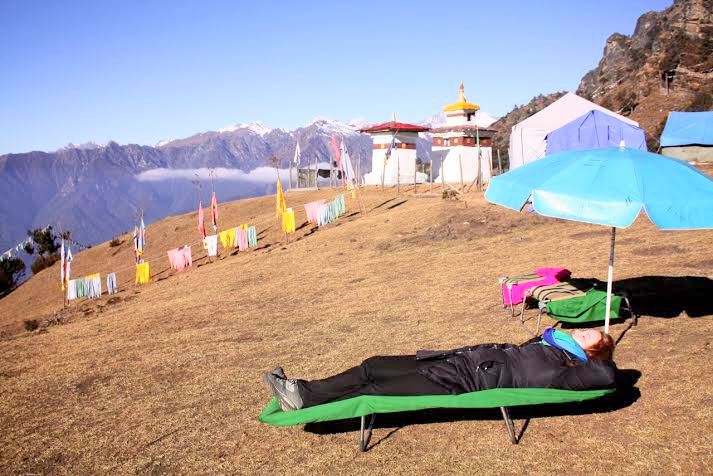 For those passengers for whom this is your first flight into Paro Airport, we’d like to remind you that we will be passing through the Himalayas to the airstrip. This time of year the winds make it a rather bumpy ride. We just wanted to prepare you.

For those returning to Bhutan, welcome back.

I and a friend from HNC have been hitting our bucket list this year. We’ve both worked in the ‘real world’ and know how hard it is to get vacation time, so we have decided to spend our school vacations going to see fascinating places. Last week, we went to Bhutan.

Before I landed, I knew the country was mountainous, full of undeveloped land, and measured its success by how happy its people are (GNH – Gross National Happiness). As a global scholar studying China and visiting more desolate places, this sounded a lot like North Korea. I didn’t know what to expect.

Exiting the plane was a jolt to my system. Very few people have experienced breathing what China’s AQI (air quality index) deems 500+, severely polluted and beyond measurement index. In China, the skyrocketing AQI means you can taste the air; it’s metallic in nature. Arriving in Bhutan, my nose had never been so glad to breathe crisp mountain air. Each breath was so clean it hurt my nose.

We met our guide and drove to the capitol city, Thimphu, which is the only capitol in the world that does not have a single traffic light. My brother, who lived in Bhutan in the late 1990s as a visiting doctor, told me they had installed one traffic light then, but the people had since requested it be taken down because it made them feel too detached. They wanted the traffic man to come back to work the busy intersection. Given that another person in my family had been to Bhutan, I felt very connected to what I was seeing, thinking how he had probably gone to the same places and seen the same sites.

We traveled to a couple different cities, driving through the mountain passes at 10,000 feet above sea level. We walked on wire-bottomed bridges, through fields and hiked up small mountains to tiny monasteries where only one monk sits vigil. Since the King of Bhutan wants to preserve the country as much as possible, he has disallowed any type of foreign architecture, so that the entire landscape is scattered with traditionally Bhutanese-style houses, fortresses, and monasteries. The most beautiful one was in Punakha, an old fortress that now houses monks. It’s nestled in between mountains and next to a couple of glacial rivers.

The final days of our trip were spent trekking the Himalayas to see the Tiger’s Nest monastery, one of the most famous and holy sites in Bhutan. I spent most of the trek realizing just how much Chinese smog has had an impact on my lung capacity, because I was wheezing through most of the hike, but the view from the top of the mountains is something that had to be seen. We hiked up to 12,000 feet, which took an entire day of climbing and walking along ridges, to camp for a night and then approached the Tiger’s Nest by midday the next day. The monastery is built into the side of a mountain and the entire area is covered with Buddhist prayer flags. Even though the trek was one of the more challenging parts of the trip, it was an unforgettable experience. Looking over my shoulder as we hiked back down the mountain to see the monastery perched as a small white dot on the cliff side, I realized how special the country was and what we had achieved. I will remember Bhutan as one of the happiest and most beautiful places I have ever been.