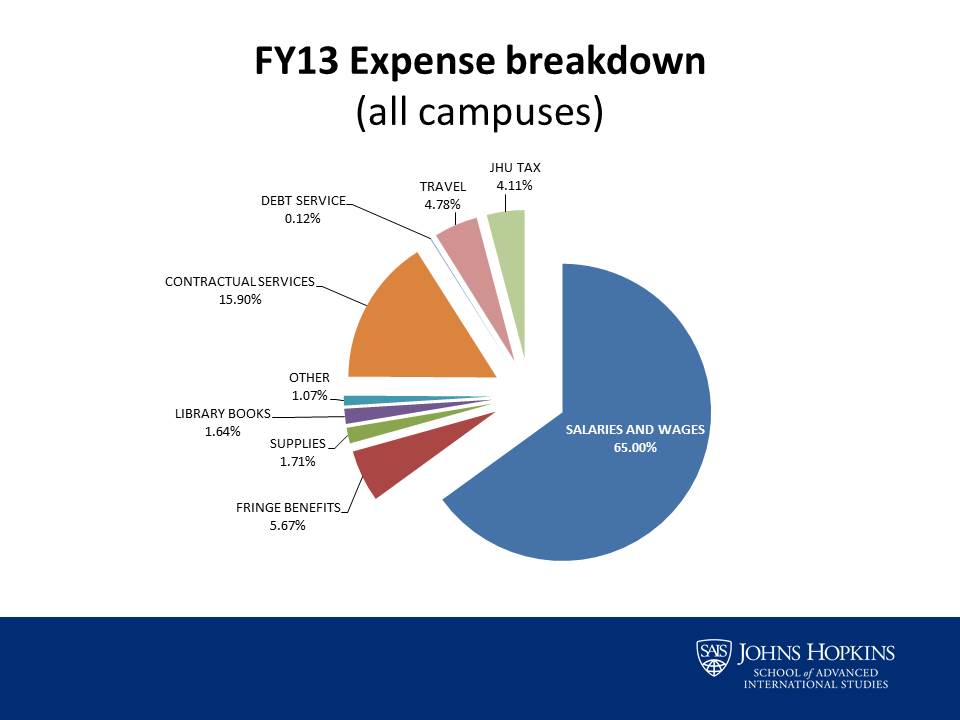 The arrival of Dean Nasr has ushered in a new era for the school and nowhere is this more apparent than with the school’s finances.

Nasr, who came on in July 2012, inherited a budget that was in serious deficit. There were walls between SAIS DC, SAIS Europe and HNC budgets and disagreement over where the budgets should overlap. Correspondingly, there was uncertainty as to where the responsibilities of the three finance directors should lie. Complicating the situation was the fact that new Associate Dean for Development and Alumni Relations, Lori Cwalina, had also just joined the SAIS leadership.

The three million dollar deficit in the SAIS budget last year was largely due to an unexpected contraction in philanthropy, which required a drawing down of reserves. This attracted attention from faculty, students, alumni and the larger JHU (SAIS only represents 1% of the JHU budget). It also led to a partial restructuring of the SAIS budget.

“With a small endowment, SAIS relies on the generosity of donors and alumni to supplement tuition which only covers about 65% of total costs of the school,” said Bart Drakulich, director of finances and operations at SAIS Europe. Based on figures provided to the SAIS Observer, on a per campus basis, SAIS DC costs the most money per student, followed by SAIS Europe and then HNC. HNC lost the most money out of the three schools followed by SAIS DC and then SAIS Europe. When this information was pointed out, Drakulich emphasized that this does not properly depict the state of SAIS’ finances.

“This is the very reason we combined the DC and Bologna budgets,” Drakulich continued, “Bologna only currently hosts the European and Eurasian Studies program while all of the other academic programs and their associated costs are based in DC. ”
The principal costs of the school are the salaries of professors and administrative staff.

“As a top tier graduate school we are very human-capital intensive. It’s not always cheap hiring the best professors and administrators to support the students,” said Drakulich.

Other drivers of tuition include, but are not limited to, travel expenses for faculty, facilities cost, and a “tax” levied by JHU in Baltimore for overhead and administration costs.

Drakulich held a townhall on November 15, to discuss what the administration was doing to address these problems. As had been announced by Nasr, Drakulich has assumed additional duties as the special adviser for budget strategy and integration. While still not complete, Drakulich is confident that Nasr’s new effort will lead to the complete integration of the SAIS DC and Europe budgets.

“The integration of these budgets is absolutely necessary if there is to be greater collaboration between the different campuses,” said Drakulich.

Separate budgets were an impediment to integration as they disincentivized cost sharing. For example, if professors that usually teach in DC wanted to conduct a sabbatical in Bologna there was disagreement over who should pay for the flights.While the restructured budget was only recently presented to faculty, there are signs that it is possible.

“The European and Eurasian Studies program, led by Erik Jones, is a trailblazer in budget integration,” said Drakulich.

Jones not only operates an office budget in Bologna but also in DC. He is able to service both campuses while being based at SAIS Europe. As for Nanjing, the administration is continuing to work on a plan to bring Nanjing back to profitability.

The second major part of SAIS DC and SAIS Europe budget integration is creating an accounting framework that can be used across all campuses. The key will be to maintain transparency while continuing to take advantage of any cost sharing. Simply lumping the budgets together will not be a long-term solution as it would be difficult to monitor cost centers. Drakulich will be working with Vivian Walker in DC to standardize the accounting framework.

“Vivian Walker and I are like Simon and Garfunkel, we collaborate closely on everything… Who’s who? You’ll have to ask Vivian,” said Drakulich.

While last year SAIS experienced a deficit, the administration is confident that due to the budget restructuring SAIS will be able to break even or build reserves in the future. Additionally, they hope that the new restructuring will improve the student experience and make SAIS an even better school.

Next post Details Behind SAIS Finances
The SAIS Observer Staff