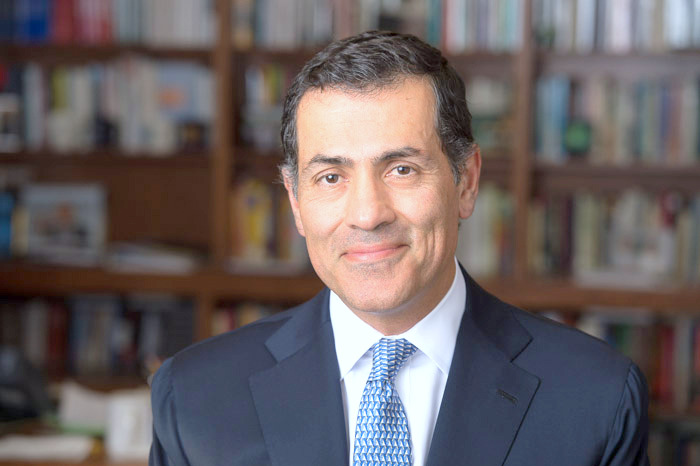 Since Dean Vali Nasr took the helm in fall 2012, SAIS has undergone tremendous change in line with his “One SAIS” vision. Over the past year and a half, Nasr has pursued changes across a variety of areas, including branding, curriculum, fundraising, and administration – all towards maintaining the school’s stature as one of the top IR programs in the world.

Nasr recently sat down with The SAIS Observer to contextualize all of these initiatives.

One area where Nasr felt SAIS had room for improvement was branding. He has sought to change this by leveraging technology, promoting the concept of SAIS Europe, and increasing the diversity of speakers.

A budding initiative is ‘SAIS Now’, which aggregates all of SAIS’ social media content into one website.

“A lot more of student life happens online…from admissions to career services to [the] use of social networking, to the way you guys communicate,” Nasr said.

Additionally, toward rebranding efforts, SAIS Europe is a way to show the expansive nature of SAIS, according to Nasr (read the Observer’s coverage of the reasons behind the renaming in “SAIS BC, Now SAIS Europe”). It reflects the activities, outreach, and leadership that stem from the Bologna campus.

“You have to come up with a model of how you are global and local at the same time,” Nasr said on balancing the financial and intellectual requirements of three campuses. “By giving Bologna, Nanjing and Washington the right degree of being local and at the same level being …more than a confederation.”

Nasr has also expanded the profile and diversity of speakers; last year SAIS welcomed  Google’s Eric Schmidt, Governor of the Reserve Bank of India Raghuram Rajan and former Secretary of State Madeline Albright, amongst others.

“We want to tout that this is the place where world leaders come from,” Nasr said.

SAIS can expect the same caliber of speakers going forward, said Nasr. Locked in for the spring is Christine Lagarde, the current managing director of the International Monetary Fund. “She is going to give her curtain raiser speech for the IMF meeting at SAIS,” Nasr said.

Shamila Chaudhary, senior advisor to the dean, and Nidhi Sinha, the new director of communications and marketing, are also furthering rebranding and public outreach strategies.

Focusing on the Curriculum

One initiative to make the curriculum more flexible has been the adoption of seven-week course modules, which allow students to focus on a country or issue but not lose a full credit.

“Within a two-year timeframe, you can’t take courses on six Middle East countries. But you might not need a whole course… seven weeks on Egypt may be just what you need,” Nasr said. The idea seems to have been received well this spring, as there are three such courses available on Iran, Egypt, and Islam and Politics.

“[Students] are going to be working in corporations that have footprints in Singapore and Sao Paulo… working for banks … or for the State Department, and embassies and consulates.” In this regard, Nasr believes “we have to get [the definition] right ourselves if we are going to be educating students to operate in that kind of environment.”

The new Master’s in International Economics and Finance (MIEF) degree program, starting this fall, is another initiative which will attract Ph.D.-leaning students, according to Nasr (read more about the MIEF in the Observer’s article “SAIS Announces New Degree”).

Extra capacity in physical space and faculty teaching time also enable such a program. “It is a way of expanding the school without putting pressure on [the] M.A. program,” Nasr said.

A lack of tenure track positions has also been a challenge for SAIS. To change this, Nasr initiated a tenure track policy last year at SAIS Washington.

“We now have nine active searches from South Asia to Economics to ERE,” Nasr said. “This is the first time the school is doing so many searches at once [and] we were overwhelmed by the enthusiasm.”

Nasr has also introduced external review committees for some concentrations to improve the quality of the curriculum and streamline it across concentrations and campuses.

“At some point, we might do it for our entire curriculum, but this is sort of a gradual process,” Nasr said.

With a small endowment, SAIS has always struggled with low fundraising. On top of that, Nasr walked into a serious budget deficit, exacerbated by siloed budgets across campuses and disagreement over budget overlap. Nasr aimed to improve the situation with a few key steps.

Lori Cwalina joined SAIS as associate dean for development and alumni relations, where she is restructuring the development office and improving fundraising. “[She is] putting it on the fast track for us to begin the process of getting bigger proposals and revenue,” Nasr said.

In the fall, SAIS merged budgets across Washington and Bologna and restructured the financial team (read the Observer article on the SAIS finances and the restructuring in “Details Behind SAIS Finances”). Bart Drakulich leads this effort from Bologna and reports to Dean Myron Kunka.

On fundraising, SAIS is part of the “Rising to the Challenge” campaign, an ambitious university-wide initiative that aims to raise $4.5 billion for the Hopkins community. SAIS’ goal is to raise $160 million by 2017.

New programs are also helping improve SAIS’ financial position. These include the MIEF in DC, the English Language Summer school in Nanjing and potentially others in the future.

As fundraising and donations gain momentum, changes are happening on campus. The office of admissions last year received a physical upgrade thanks to the donation of a SAIS alumnus. Last October, the Bernstein-Offit building opened the new DC Learning Commons.

Nasr is also employing his “flatter organization” philosophy at SAIS.

“I am not a hierarchy person,” Nasr said. “I believe in flat organizations.”

He upholds this leadership style through recent restructuring efforts, his informal Coffee Hours, and the Dean’s Forums.

As these initiatives take root, Nasr also stresses the importance of feedback. On curriculum and instruction, for example, “we take your evaluations extremely seriously,” Nasr said.

Several faces have come and gone since Nasr’s arrival. These transitions ultimately provide the opportunity for new faces to play a role in SAIS’s progression along the “One SAIS” path.

After 18 years at SAIS, Bonnie Wilson stepped down as assistant dean of students last fall.

The transition started under the previous dean, “but we decided to postpone this for a year until I settled down,” Nasr said. “[Wilson] has had a very stellar career. She is leaving behind a very strong team.” Wilson will continue to serve part-time in an advisory role.

Noemi Rice starts as chief student affairs officer (CSAO) this term; she will build on her experience as director of financial aid for the last eight years.

Felisa Klubes, who served as director of communications for 15 years at SAIS, left in December to join another organization.

Bologna and Nanjing have also seen major changes. Dr. Cornelius Kubler will succeed Dr. Jason Patent as the next American co-director at HNC.

Lastly, Dr. Michael Plummer will take on Dr. Kenneth Keller’s role as the director of SAIS Europe this August.

The totality of these initiatives – rebranding, curriculum, fundraising, and administrative changes – further the “One SAIS” vision. “Producing great global leaders and [being] the place where new ideas are generated, discussed, and put on the table” is paramount, according to Nasr.

“Obviously an important mission going forward is to maintain that edge…that we have the best programs, we combine these programs well, [and] we combine it with the experiences of Nanjing, Bologna, and Washington to really produce something that is unique.”

One thought on “Dean Vali Nasr, One Year In”