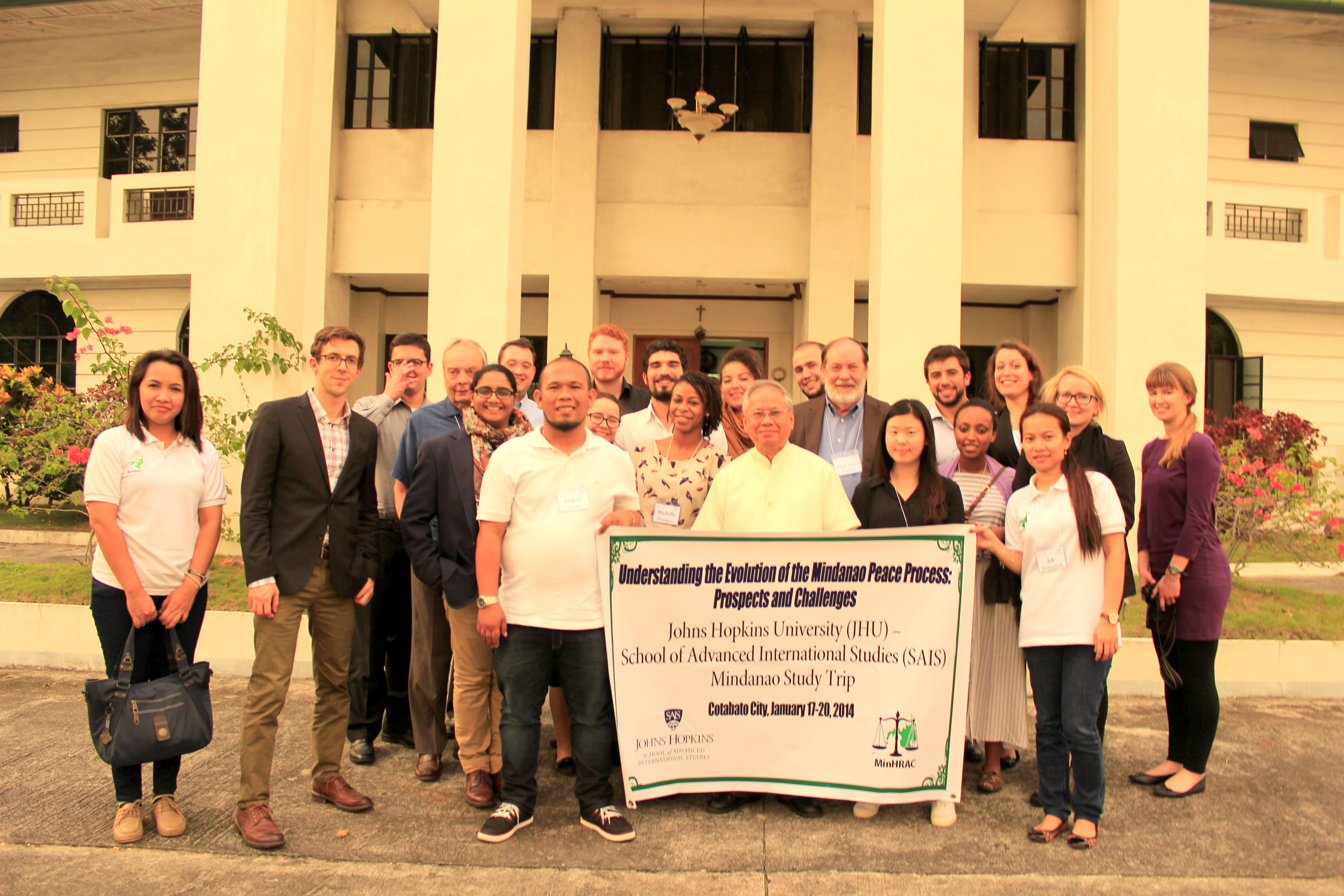 “It was an amazing opportunity to be present at the threshold of such a monumental moment for the Filipino people in general and the Moro community in particular,” said second-year SAIS student Benjamin Merrill.

Although we arrived to the Philippines largely unversed with the complex aspects of the conflict, by the end of our eight-day intensive visit, we had learned most of the intricacies of the peace process. Coming from more than 14 countries, and each with a different topic of interest that we hoped to investigate over the coming days, our diversity was an asset to the group’s rich discussions and to our own understanding of the situation. Despite working long days for much of the trip, our enthusiasm with each new experience motivated us to continually share perspectives and ideas throughout our journey together.

Second-year student Oliver Russell described the trip as being “by far the best opportunity SAIS has to offer: [I] learnt more than in any course.”

Although we had heard on numerous occasions in Manila that Mindanao was too dangerous to visit, as the site of an active conflict zone that had seen kidnappings in the region’s islands only months prior, we were in the unique position of being invited and protected by both the Army and the MILF. As such, as our guide and organizer in Cotabato, Zen Malang, former executive director of the Mindanao Human Rights Action Centre (MinHRAC), cheerfully told us, we would not have to worry about our security: because everyone knew that we were under the protection of the big boys, no one would dare touch us.

Overall, as academics and as SAISers, we were consistently surprised by and benefited from the candor that our position afforded us, even when our questions were not as politically sensitive as our interlocutors may have been used to. We’d like to think that these discussions may have slightly contributed to the preparation of the parties that met in Kuala Lumpur directly after our time with them!

Additionally, the fact that the Philippines had been the site of the 2011 field trip means that our analyses will have longitudinal value, as our predecessors’ work gives us a clear idea of the state of the country immediately before negotiations began in 2012.

“As most of us have never experienced violent conflict ourselves, the Field Trip provided us with a unique opportunity to learn about the complexities of conflict resolution and apply our classroom knowledge in a real-world setting,” said Felix Neugebauer, a second-year Conflict Management concentrator.

Our familiarity to the conflict has also made us more aware of the challenges that remain to its full resolution, even should the coming months see the successful passage of the Bangsamoro Basic Law through Congress and the Supreme Court, and validation by plebiscite. One of the persistent refrains that we heard from the parties was that the best way we could help the situation and its resolution would be to faithfully reflect what we had seen in the Philippines, and to help more people learn about the fascinating and difficult trials that have faced the country for decades. We will work hard to do so in the coming months, and so hope to make a lasting contribution to a just peace in the Philippines.

Next post On the Frontline of Cross-strait Relations
sgrosve2