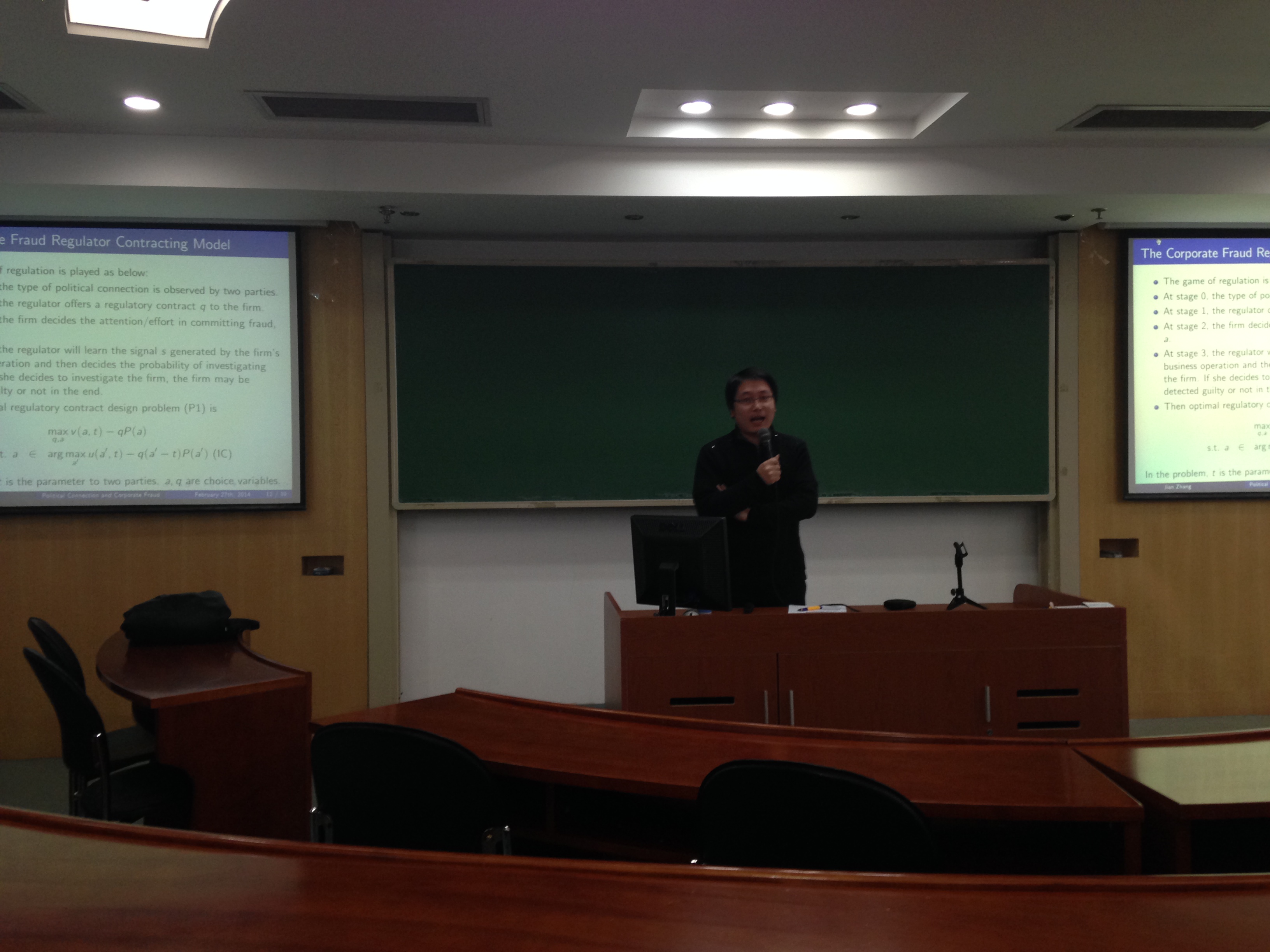 Dr. Jian Zhang, who represents Southwestern University’s Department of Finance, lectured recently on the relationship between fraud in firms and the likelihood of those firms having overt connections to governmental institutions or officials. The lecture, which took place on Feb. 27 in the An Zhong Building, saw an audience of students from both the Hopkins-Nanjing Center (HNC) and Nanjing University.

Dr. Zhang, who earned his Ph.D. in finance at Temple University in the U.S., has developed a series of complex equations to map the phenomenon. His talk presented an algebraically-based theory regarding the connection between politics and corporate fraud.

Zhang began the talk by introducing the concept of fraud in the U.S. and drawing comparisons between high-profile corporate fraud cases of the early 2000s, including Enron, WorldCom and Madoff. In these cases, loose monitoring allowed fraud to take place. He claimed one critical reason for loose monitoring was the corporate-political connections involved.

Zhang’s study pioneers a new way of looking at fraud because there exists only a limited amount of research studies on the relationship between political connections and corporate fraud. Rather, available research focuses attention on fraud detection as opposed to prevention or origin.

Empirically, China is an ideal location for his study due to its widespread political networking, opportunities for public officials to control economic circumstances, the absence of media accountability and public scrutiny and a legal environment that is not currently fit to investigate fraud.

While China’s economic transition, from a planned economy to a free market system, is far from complete and the end-game is impossible to predict, empirical data shows that during this transitional period political connections have enhanced a given firm’s performance and value. In corrupt firms there are few directors who act independently of the government.

Furthermore, in China there exists a high incentive to commit fraud as government regulators generally do not whistleblow. According to Zhang, politically connected firms in the U.S. and China have less chance of scrutiny from law enforcement actions by the U.S.-based Securities and Exchange Commission (SEC) or China’s equivalent, the Chinese Securities Regulatory Commission (CSRC).

Unlike firms in Western countries, Chinese firms employ a more direct way to establish political connections by hiring former government officials. A significant portion of public firms are controlled by the government due to the partial privatization of former state-owned enterprises (SOEs). As such, corporate-political connections are widespread in China.

Zhang has studied 426 unique case examples from 2003 to 2009 and has compiled a database to test his equations.

There are costs associated with investigating a firm. If the firm is politically connected, the cost is higher. The higher the cost, the less likely the CSRC will investigate. This means the more political connections present in a given firm, the less likely the chance for investigation. In playing what Zhang calls the “regulatory game,” the first stage is observation of the type of political connection between a given firm and the CSRC. Next, the regulator offers a regulatory contract to the firm. The firm then determines the costs and benefits of fraud.

Charting fraud by industry, Zhang concluded the materials industry has the highest number of cases, while the energy industry has the least. Others include manufacturing, consumption, medical, finance, information technology and utilities. Zhang has stated that higher case totals are connected to the detectability of fraud given his samples rather than the cleanliness of a given industry which is harder to measure.

The basic point of Zhang’s study is to empirically determine causes, occurrences and detectability of corporate fraud based on their connections to politics. Through highly advanced formulaic expressions, he has concluded the more political connections a firm has, the more likely it is to commit fraud.