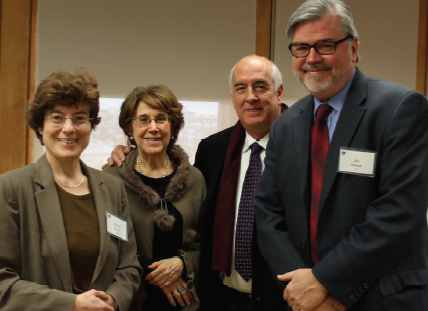 Roberta Cohen, Batch of 1963, attended one year in Washington and one year in Bologna and has been a pioneer in human rights and humanitarian issues in international affairs for five decades. She served in the US State Department’s Bureau of Human Rights during the Carter administration and worked for decades to define the concepts of internally displaced persons and state sovereignty as including the responsibility to protect one’s citizens. She is a non-resident senior fellow in foreign policy at the Brookings Institution.

“I looked under ‘international,’ and I called every listing down to International Review Service,” she said, “and they needed someone to do research and writing, and they were in the press section at the UN.”

Having just completed SAIS with a specialization in Soviet Studies, Cohen only knew she wanted to do research and write on the intersection of the Cold War, Communism and international relations.

“My college placement office suggested I start as a history teacher or a secretary,” she said. “And SAIS said I should start in a bank or the foreign service, which I had absolutely no interest in.”

For the International Review Service, she worked as external press covering the UN. While there she experienced the Cuban Missile Crisis, met US Ambassador Adlai Stevenson and Soviet Representative Nikolai Federenko, and engaged on other flash points, such as the recent independence of the Republic of the Congo.

“It was a wonderful first position,” Cohen said. “I felt I owed my ability to do it well to my time at SAIS.”

However, Cohen left the job by 1964 because she felt she couldn’t stay after experiencing sexual harassment, which could not be fought as it is today.

So she went back to the phonebook and looked under ‘world.’ This time she got down to the World Jewish Congress, which needed someone to represent them at the UN on human rights. In this position, Cohen published on developing human rights standards and remained involved at the UN. She also represented the Féderation Internationale des Droits de l’Homme (International Federation for Human Rights) at the UN.

One experience defined her career from there. The USSR called for the expulsion from the UN of the Féderation and other organizations, which were arguing the international community had the right despite state sovereignty to speak out when the state was not protecting its own people.

Cohen spoke out against the position of the Soviet representative and defended the organization. She disagreed. States were bound to protect their citizens.

“The idea was that sovereignty was not supreme when it came to human rights,” she said. “Human rights also were an international concern and responsibility.”

Cohen went to work for the International League for Human Rights as its executive director to promote the idea. She was cited in newspapers, lobbied international bodies to hold states to account and pushed recommendations for the US to stand up for human rights in its foreign policy.

Then the Carter administration called. They wanted her to work in the US State Department’s first Bureau of Human Rights where she later became Deputy Assistant Secretary.

“They said, ‘You have all these recommendations for us. Now come do them,’” Cohen said.

The hardest challenge was convincing the State Department’s own foreign service officers, who argued it was too complicated and interfered with other priorities, that incorporating human rights was actually in the country’s national interest.

“It was a great fight,” Cohen said. “It was one of the most intense professional times, but it was a fantastic experience. We created the foundation for human rights to be part of US foreign policy.”

During her time in the Carter administration, Cohen “fell in love” with a foreign service officer, David A. Korn, who later became chief of mission in Ethiopia. Accompanying him there, she witnessed a new problem for the first time: internally displaced persons (IDPs).

The issue stuck with Cohen, and when she came back to the US she worked for a small think tank to draw the connection between human rights and humanitarian issues. Following several years of activism with other NGOs, she was able to bring the issue to the UN and the secretary general appointed Sudanese diplomat and scholar Francis Deng as his representative on internally displaced persons. With Deng, Cohen founded and directed the Brookings Institution Project on Internal Displacement where she has been able to research and publish on internally displaced persons.

“It was great doing this in a think tank like Brookings because it gave me the opportunity to have a platform,” she said. “I really could think, dream, advocate on a subject that needed to be put on the international agenda.”

Cohen had two main pieces of advice for current SAISers.

The first: “Follow your heart, and do what you want to do,” she said. “Don’t look for ‘a job.’ Look for something that you want to get up in the morning and do that means something to you.  Otherwise, you just have a job.”

“Too many young people are remarkably unimaginative and bureaucratic in their jobs….Have some confidence in your thought processes, and be original and creative in subjects. Don’t accept the line everyone else has.”

As for Cohen’s future, she has entered an allegedly quiet retirement. She serves as the co-chair of the Committee for Human Rights in North Korea and remains connected to Brookings where she writes on humanitarian issues. She also teaches a course on vulnerable populations at American University law school. After decades of researching, publishing, advocating and doing consultancies in the field, Cohen said she has no plans to slow down very much.

“One has to study these problems to make a base,” she said. “But then one has to do something about them.”