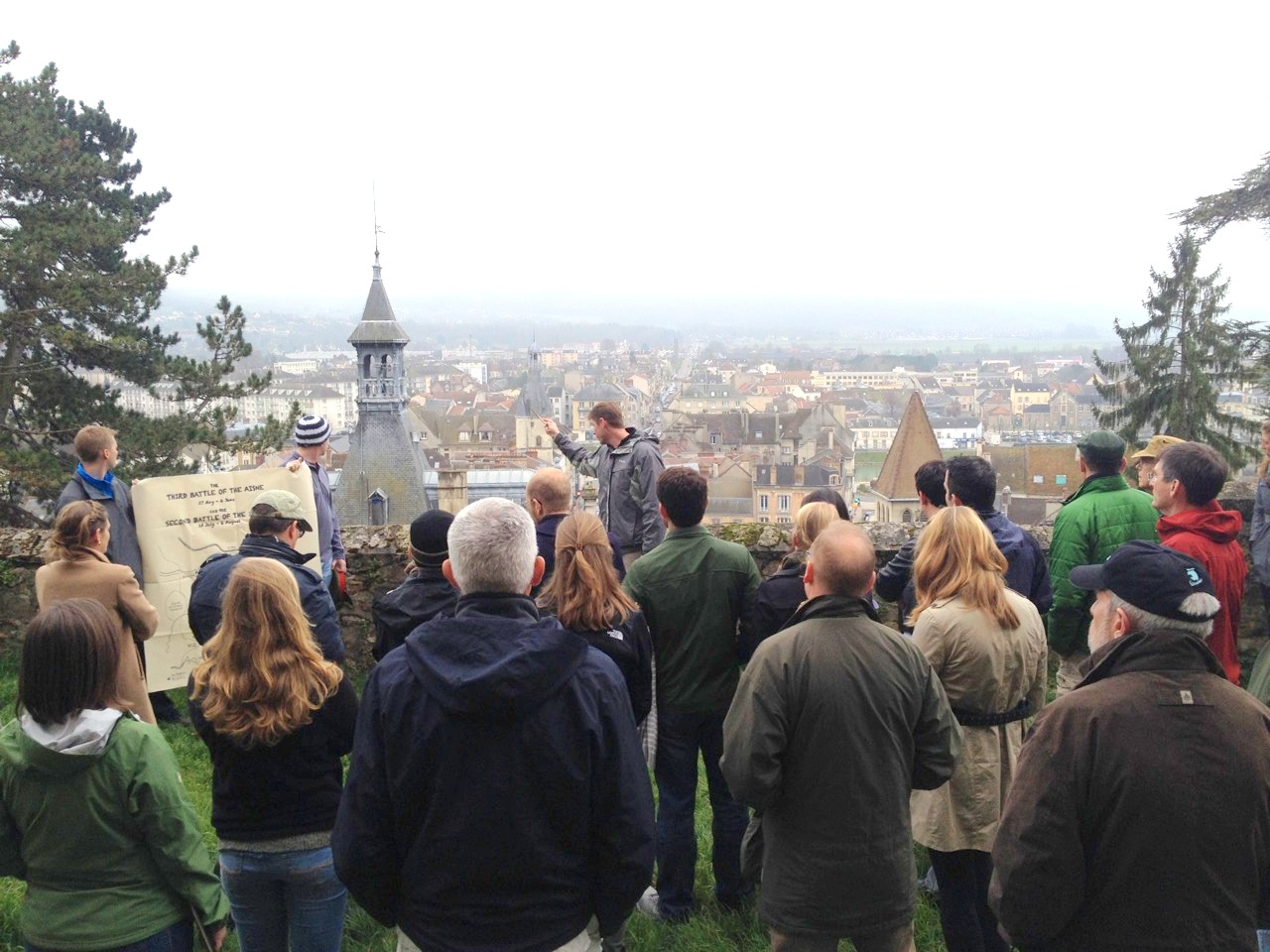 On March 14, as Friday exams winded down to commence Spring Break, a Brussels-bound flight set off for a quiet Western Front. 100 years ago, American soldiers would have traveled by sea to fight in World War I. Last month, over forty SAIS students went by air; not to fight, but to study how the fight in 1918 ended.

This year’s International Staff Ride (ISR), a tradition dating back to 2000, spanned four days of intense learning and roleplaying of the decision-makers who forever altered history in 1918: presidents, politicians, commanders, soldiers, journalists, activists and others.

“The fundamental aim [of ISR] is that this is an educational enterprise,” said Eliot Cohen, the Robert E. Osgood Professor of Strategic Studies and founder of the Staff Ride Program at SAIS. “I have always felt that you learn things from being on the ground that you won’t learn simply from books about the events themselves.”

Through lush green fields of Le Hamel to bomb-dented grounds of Gauche Wood to cemeteries of the fallen, students, faculty, and distinguished visitors (DVs) trekked through time – studying the major German offensives, the Allies’ counterattacks, the amalgamation of troops and the ensuing peace negotiations. “For four days, for sixteen hours a day, people are living and breathing this particular episode,” Cohen said.

Idon Natanzon, a second-year student who role-played General Ludendorff with a lively German accent, was one of the trip’s first presenters. “I think what struck me most was how totally dominant the military was over the political leaders,” Natanzon said of the German perspective. Integral to ISR are these ten-minute presentations, which are assigned to participants based on interests, background and even accent affinity.

Meaghan Doherty, a first-year SAIS Europe student who speaks fluent French, played General Foch fittingly. “I thought the student presentations were brilliant and brought a certain vivacity and life to the events of 1918 that I will not soon forget,” Doherty said.

One such event was President Woodrow Wilson’s attempt to end the war. “Wilson was a visionary in many aspects,” said Adam Van Deusen, a second-year student who played Wilson. “However, his single-mindedness about his goals and limited willingness to compromise would contribute to the US’ failure to ratify the Treaty of Versailles and join the League of Nations.”

Days were long, but learning was rich. “It really helps students get into the mindsets of decision-makers at the time,” said Andy Feitt, a second-year student and one of two Research Leads along with Annie Seibert. “But it is also a great opportunity to build camaraderie amongst students and to gain terrific insights from professors and distinguished visitors.”

“The first and perhaps most important thing we had to do was figure out how we were going to capture the essence of a complex historical event in four and a half days and about 50 presentations at 20 or so different sites,” said Eric Lindsey, who with Marisa Sullivan, was one of the two Quartermasters.

In time, the QMs took two scouting trips to Europe, finalized the trip’s scope, and fielded a team tasked with sequencing the presentations, ironing out logistics, and coaching participants on their research. From such stage planning came enriching debate, lasting bonds, and illuminating takeaways.

For Christine Croft, a first-year student and also a logistics assistant, leadership was the biggest takeaway. “Having the right person for the job in the right place at the right time is sometimes more important than differences in material or manpower,” Croft said.

One major leader during 1918 was General John Pershing, who was played by Lt. Gen. Mark Hertling, a former US Commanding General. “Coalitions and alliances always have constraints, restraints, and reliance on what today we call national caveats,” Hertling said. “All military leaders must consider [these issues] no matter the conflict, alliance or time.”

Will Quinn, a first-year student, saw beyond 1918. “The way the war ended; with an armistice rather than an occupation, and a peace conference promising self-determination; fed the hopes, fears, and disillusionment of millions of people around the globe and paved the way for conflicts far into the future.”

With that future, we still live today. “My biggest takeaway from this trip was a distinct reaffirmation of my already strong faith in the next generation of leaders represented by all those I met on this trip,” Hertling said. Other DVs on the trip were Chris McNicol, General (Retd) Sir Paul Newton, Chris Costa and David and Marilyn Fuhrmann.

ISR was not all learning. From riding bumper cars in Ypres to sipping Taittinger in Reims to telling stories beneath the Eiffel Tower, long days were tempered with fun nights. After the closing dinner in Paris, the Fuhrmanns treated all to an open bar while music hummed, stories unfolded, and SAIS Professor John McLaughlin entertained the group with crowd-engaging magic.

In many ways, ISR was like entering a time capsule. Fields were eerily the same, trenches were still visible, and monuments and cemeteries are still forever erected. “The Last Post Ceremony at Menin Gate [in Ypres] and the visit to the Australian and American cemeteries really resonated with me,” Feitt said. “Even 100 years after the war, those places are still filled with emotion.”

To learn more about this trip, visit www.isr2014.com.

Previous post ‘Most Radical Form of Terrorism in China’