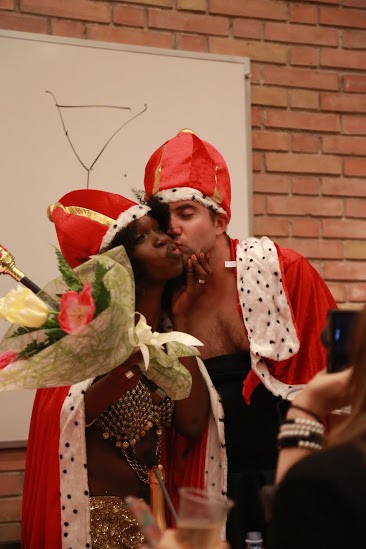 On Saturday April 5, SAIS Europe celebrated the annual Mr. and Mrs. SAIS auction to benefit the Bologna Center Journal of International Affairs. The event included a talent show and a live auction where students, faculty and staff bid on offerings from their colleagues and peers. Among the auction items were a multi-course meal cooked by a SAIS Europe student (Giulio of Giulio’s Café purchased the meal), a New York City apartment rental, a scooter ride in the Apennines, and a yoga class, among others. The auction raised several thousand dollars for the Journal.

In addition to funds for the Journal, the evening’s talent show yielded a new Mr. and Mrs. SAIS. After watching several performances, students elected Grace Cineas and Derek Schlickeisen. Cineas performed a belly-dance routine, while Schlickeisen performed a cross-dressing stand-up routine. Cineas and Schickheisen note that the competition was top quality. “Everyone performed so well. For me the competition was all about having fun and making a complete fool of myself. Derek, on the other hand, kept character throughout the show. Absolutely amazing.”

When asked about his newfound acclaim, Schickheisein said, “Acclaim is a very kind word for losing any remaining shred of dignity I may have had!”

What is next for the winners? “You know I am thinking of taking this show on the road with Derek. His moves were so great in his introduction. I think he will be a very natural belly dancer,” said Cineas.