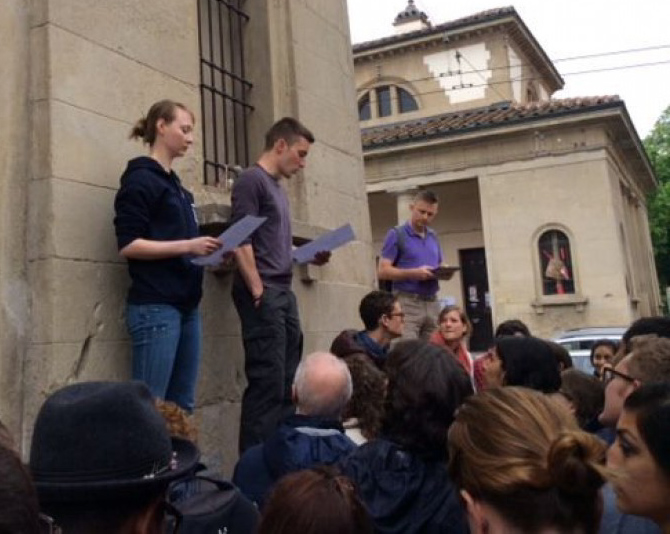 On April 13, a group of 50 SAIS Europe students, staff and guests gathered at one of Bologna’s medieval city gates to participate in a history tour. One of them stood up on a ledge overlooking the crowd and addressed them in German. Another student translated. The message was clear: “No partisans were to be allowed into the city. Inspect the baggage and documents of all persons entering or leaving the historic center!” This was to be no ordinary tour.

This was an interactive event in which students provided presentations at several World War II-related sites throughout the historic city center. The first stop recreated the scene at Porta Santo Stefano 70 years ago, when Bologna was occupied by the Germans. Other stops included battle-damaged buildings, the site of a failed assassination attempt on Mussolini and a former German prison attacked by partisans who liberated more than 300 people in 1944.

At each stop a student, or group of students, presented the subject matter, often by telling a story or using a little role-playing. A Facebook page was established specifically for the tour, and during the actual event, participants posted images, text and other supplementary information in real-time. For example, when the tour paused at the traffic intersection at the base of Bologna’s famous two towers, participants posted a World War II era photo taken at the same location. People with smartphones or iPads could sign onto a free wireless internet signal set up especially for the tour.
The World War II Bologna tour raised funds for similar events to take place in Germany over Easter weekend, when 22 students visited Munich and Nuremberg to study the rise of National Socialism in Germany in 1920s and 1930s.

Previous post Letter to the Editors: Caps and Gowns Cost
Next post US and Illiberal Democracies: The Cost of Non-Engagement
The SAIS Observer Staff