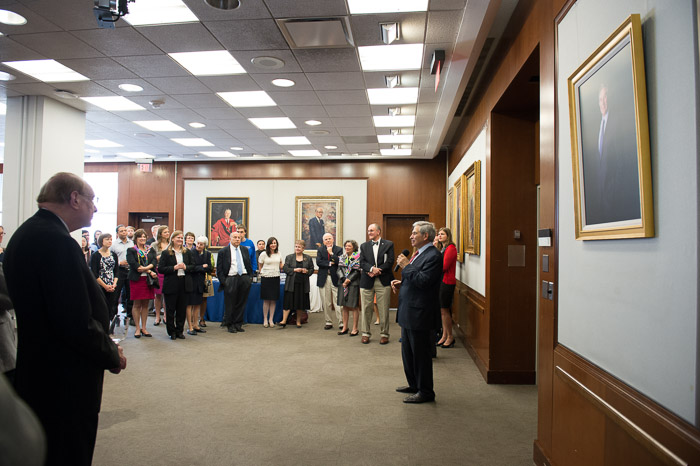 Former statesman and SAIS Dean Paul Wolfowitz was honored Wednesday with a portrait unveiling ceremony in Kenney Herter Auditorium. Amid finals week at the Washington campus, students paused from studying, professors from oral exams, and staff from their desks to join Dean Vali Nasr and several professors to celebrate the leadership and accomplishments of Wolfowitz.

History and humor filled the speeches as professors, many of whom were hired under Wolfowitz’s tenure, shared personal anecdotes. After introductory remarks from Nasr, Professor Eliot Cohen shared stories of the past. “He [ultimately] came here because of the students,” said Cohen, who also relayed stories of Wolfowitz on staff rides, in the classroom and around campus.

“Seldom do you get a chance to nail a dean to the wall,” Karl Jackson, professor and director of the Asia Studies Program, said humorously, pointing to Wolfowitz’s veiled portrait on a wall that features other former deans. Jackson recalled Wolfowitz’s personal style with students, a popular debate on NATO expansion he had with Professor Michael Mandelbaum before the school and the cohort of faculty he brought on during his tenure, which include Gordon Bodnar, Francis Fukuyama, David Lampton, Ruth Wedgwood and several others.

Bodnar, director of the International Economics program, recounted a “vivid memory” he had after a presentation he gave at Wharton on corporate finance some years ago. “He charged at me… and said ‘even I understand what that means’… and he invited me to lunch,” said Bodnar.

One conversation led to another, and despite coming up for tenure at Wharton, Wolfowitz offered a package to Bodnar that made him full professor in just one move. “I want to thank you for your perseverance in bringing me here,” Bodnar said with appreciation while looking at Wolfowitz. “I have been here fifteen years, and I am enjoying every bit of it.”

Bodnar unveiled the portrait to a clapping audience. “I wish my parents were still alive, because my father would be so proud, and my mother would believe it,” Wolfowitz said humorously to the audience, quoting former US President Lyndon Johnson.

From accepting the deanship to hiring faculty to serving in government, Wolfowitz recalled the history he helped shape. After serving as dean of SAIS from 1994 to 2001, he served in a variety of public capacities in Washington. As deputy secretary of defense from 2001 to 2005, he played a major role in advocacy for the Iraq War. He then served as World Bank president from 2005 until 2007, after which he resigned amid controversy. Since then, he has been a visiting scholar at the American Enterprise Institute and currently serves as chairman of the US-Taiwan Business Council.

“I have had a lot of great jobs, but two of my most favorite ones [sic] were being ambassador to Indonesia and my deanship here at SAIS,” Wolfowitz said. Commenting on the strengths of the school, Wolfowitz said SAIS is one of the few schools of international relations that combines economics with area and regional studies.

He also addressed the students in the room, calling them tomorrow’s leaders and beckoning them to public service: “…So go out there and do good work,” he said in closing. For those who missed the ceremony, the portrait hangs on the walls of Kenney Herter Auditorium, where it joins the ranks of previous deans, including SAIS founders Christian Herter and Paul H. Nitze.

Next post “One World. One SAIS” Film
The SAIS Observer Staff