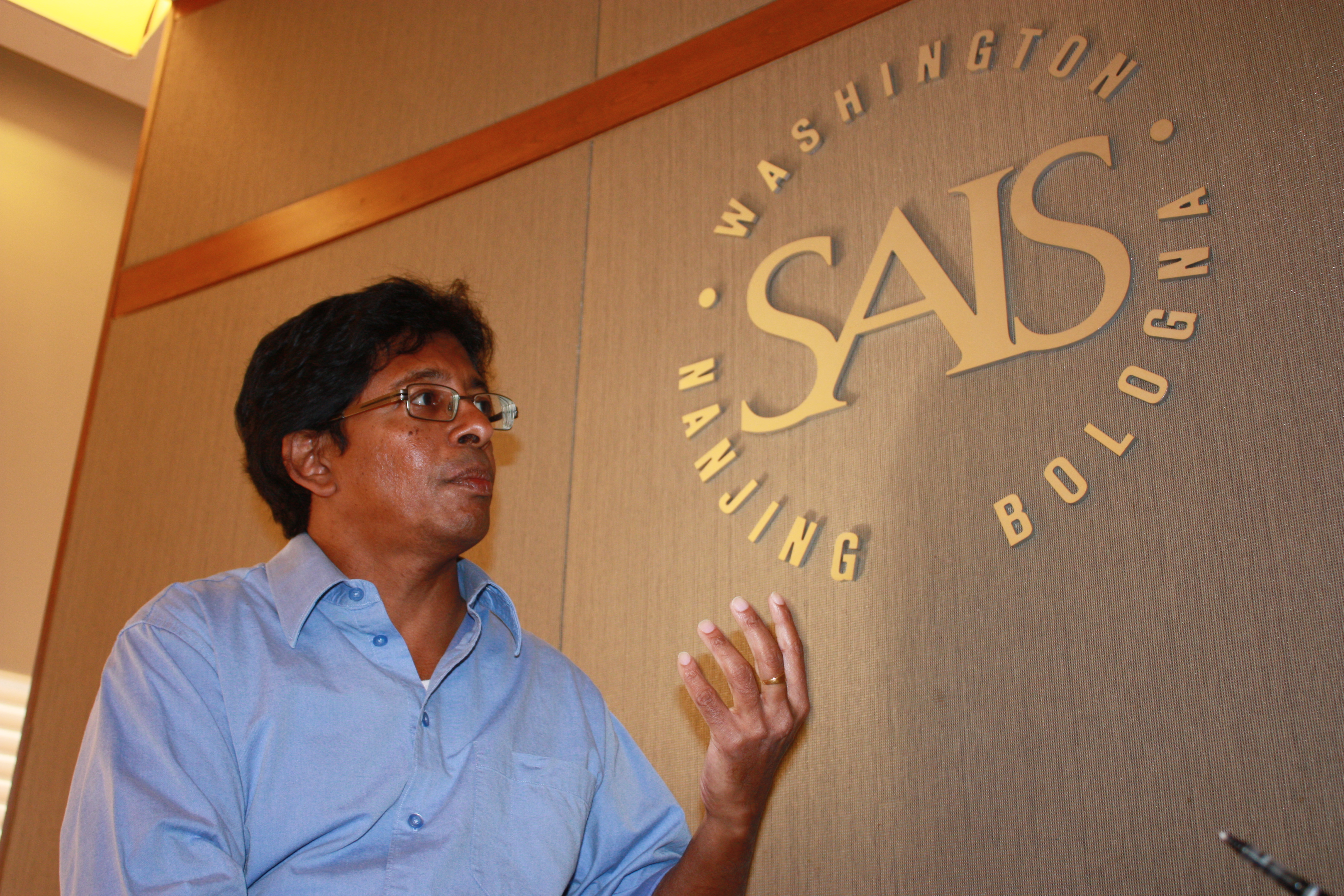 Tamil journalist J.S. Tissainayagam (“Tissa”) went to check on his friend and colleague at the Police Terrorism Investigation Division in Colombo, Sri Lanka, on March 7, 2008. His life would never be the same. After detention, arrest, and charge of violating anti- terrorism laws with his reporting, Tissa was jailed with a draconian twenty-year sentence. After an international outcry for Tissainayagam’s release, Sri Lankan President Mahinda Rajapaksa pardoned him on World Press Freedom Day in 2010. Tissa now lives with his wife in the United States as a political asylee. He sat down with The SAIS Observer to answer a few questions about his trying road from a prison cell to the United States.

On March 7, 2008, you were detained by TID, the Terrorist Investigation Division, of the Sri Lankan Police. In short, can you tell us what happened in the days and months ahead?

The day before I was detained, my colleague, who was the publisher of the Northeastern Monthly — the magazine I was editing — was arrested by police. And I didn’t know what this was all about. I thought it was some domestic issues he was having with his landlord or something like that. So I went to see him at the Terrorism Investigation Division thinking I might be of some help. And after a while later, I found out I was placed under arrest and they didn’t even tell me soon after I was taken in that I had been arrested. They just took my handphone away, and said you are going to meet the officer in charge. When I repeatedly asked them if I am under arrest, they said ‘Why are you asking if you are under arrest … what have you done?’ So then I asked him, ‘Why can’t I go out?’ That was a very ambiguous way of talking. And from that time onwards, it was a nightmare basically. It was a nightmare for me. It was a nightmare for my wife. It was a nightmare for my family.

I was detained for six months without charge from March 7th, 2008, to Aug. 20, 2008. I was charged finally around the 20th of August with inciting communal violence — for writing two articles about two years before my arrest. They had taken just two paragraphs from the two stories I had written. One article was an opinion piece on why the government was responsible for disappearances and kidnappings in Colombo. The other was an article on the military operations in Eastern Sri Lanka against the LTTE, where I had said that basically there was violations of human rights in the things that some of the [Sri Lankan] troops were doing.

People had been denied food, and water. And there was shelling. I reported on that. So this, they took out, and said it was raising communal violence and disharmony. The point here is — which my lawyers brought out later on — is that there was no incitement of violence. [People] didn’t get on the street and start killing people after my writing in 2006 or in 2008 and so there was no act of terrorism. This is a completely trumped up charge. After [the charge], I was placed in remand. So I was there for one year, from the 20th of August, 2008, to the 31st of August 2009. That was the day I was sentenced. And it was then that I was sentenced for 20 years.

Can you describe your treatment under detainment in Sri Lanka?

There was three different prisons. The first was in police detention, which was torturous to say the least. The treatment was horrible. The second pre trial detention – the remand prison where conditions were really bad because we had at times over 100 people sleeping on the ground in our hall. It was like a ward. It could not comfortably accommodate more than 50 people. So that was terrible. We only had two bathrooms. The food was terrible.

The visits we had from our relatives was a nightmare. Twenty people would see their relatives at the same time across a mesh. Everyone was just shouting at the top of their voices. And people who came to see you — your relatives, my wife, and people like that — they were also sometimes subjected to abuse, verbal abuse, they were shouted out.

We were all suspects, but in the public area, there is a board which indicates the different prison wards and how many prisoners in each ward there are. And this ward where I was in — we were all Tamils — was known as the LTTE ward. None of us had been convicted, actually I was one of the few people in there who were charged. Most everyone was just a suspect but automatically, you were seen as someone consorting or trying to meet a terrorist, which meant that anything could happen to you. In the eyes of the jailers, you had already been condemned. That was for about a year.

Were you ever harmed or physically threatened by the authorities?

Yes. On the first day I went into the TID, I was threatened by the authorities that I would be assaulted if I did not “cooperate” – given my eye condition I knew that this would mean I would go blind. From that time onwards, it was a very frightening environment in which we lived. Every day I saw people being tortured. There were various other types of torture there. One of the things they used to do was strike people on the soles of their feet with batons and cricket stumps.

When you see that, you realize that itself is an implied threat. They want you to confess. In my case, they forced a confession through torture, and the confession was the only thing they had to convict me. That is something that still happens today. Under the PTA, confessions are admissible in court. That was the main thing on which they charged me.

Your story galvanized an international outcry. On May 1, 2009, U.S. President Barack Obama said you and other journalists were “guilty of nothing more than a passion for truth and a tenacious belief that a free society depends on an informed citizenry.” One year later, on May 3, 2010 — World Press Freedom Day — you were pardoned by Sri Lankan President Mahinda Rajapaksa. Do you think these two events were related?

I think finally the main reason for my release was international pressure. Before my arrest there had many violations of the rights of journalists and freedom of expression in Sri Lanka. There had been a spike between 2006 and 2008 because journalists were being attacked. I did not know that things were going to get worse.. So before I went to the police station to look for my friend on March7, I told my wife that if I am not back by 5 o’clock, then something had gone wrong. Though I didn’t expect things like this to happen, I knew something like this could happen. No one goes to Sri Lanka in police station expected to be treated well.

Anyway to get back to your question, since my arrest in 2008 things only got worse for journalists with several being killed, imprisoned and many left for exile. At the same time because there was some international scrutiny on Sri Lanka at least for the journalists. It was only this scrutiny and international pressure that saved my life and ultimately freed me.

Not just the US but the European Union as well. They were also pretty vocal on this case. And I can say categorically that [without] this sort of international government pressure, I would not have had a chance.

You were indicted on what some would say are politically motivated charges under an anti-terrorism act. Do you think this is a reflection of what is happening elsewhere in the world?

I would say yes, in the sense that in any country where dissent is not tolerated or looked upon as a crime, say for instance in Sri Lanka [where] you have the Prevention of Terrorism Act — which criminalizes expression on political issues. The same thing happens in other countries in the region as well. So I think any country that does not tolerate dissent and criminalizes people who write against the government, does so.

Basically, what journalists are trying to [do] is to inform the public about human rights violations, military issues, corruption — about abuse of power. But the moment that happens, it is interpreted as an act of, in many countries, as an act of treason. You are doing something against the state. So I think in many other countries, you get the same thing.

So how do you operate if you are a journalist in Sri Lanka?

If you write something the government does not like, the [state] newspapers and websites label you as a terrorist or traitor. They criminalize what you have written. But it has much worse consequences because when you are publicly defamed and labeled, you can’t operate even outside your home. People think ‘Oh this guy is a terrorist.. he is a traitor So we can harass the person and the persons family. ’ So that is absolutely tough.

What personally motivated you to take such risks on what surely appears to have been a politically sensitive topic?

That is a good question because I think not only me … I think many journalists realize the risk that they take. And I don’t think it is only in Sri Lanka. It is in other parts of the world when you report in repressive societies. If you say that you shouldn’t censor yourself — if you say that self-censorship is bad, and if you say there is something wrong going on, there is abuse of power, or there are human rights violations — and you feel that you have to write, you do write. You realize that the public expects something from you. I mean you have been writing for so many years. You can’t just say I’m not going to write this any longer.

As a journalist, what do you want people to do with the information you provide?

Next post Writing Our Next Chapter Together
The SAIS Observer Staff