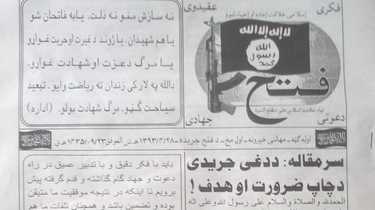 PESHAWAR, Pakistan — Riffat Ullah Orakzai is a BBC journalist based out of Peshawar, Pakistan. He has worked extensively on terrorism and militancy in the tribal region of Pakistan which borders Afghanistan. He is fluent in Pashto and Urdu. Orakzai answered a few questions via email from the Observer’s Jameel Khan and Shuja Malik.

Reuters reported on Sunday, Sept. 7, 2014, that the Islamic State is “making inroads” in India and Pakistan. You are on the ground in Peshawar. What are you seeing or hearing?

Yes, this is looking like a fact now. The Islamic State (IS) is making inroads into Pakistan and Afghanistan. There are some militants groups in Pakistan and Afghanistan who have sympathies towards IS, and in the future, they may join their ranks. In the past the tribal region of Af-Pak border has proven to be a breeding ground for religious militancy, therefore support for al-Baghdadi was always a possibility in the region. [In fact], there are some reports that some groups have already joined IS secretly.

A previously unknown group called Tehreek Khilafat, who claimed to be a splinter group of the banned Tehrik-i-Taliban (TTP), announced its decision to join IS when al-Baghdadi declared Khilafat (the Islamic Caliphate) about three months before. Two Afghan militant leaders Abdul Raheem Muslim Dost and Maulvi Abdul Qahar had also released a video few weeks ago announcing their allegiance to al-Baghdadi.

Several news outlets have reported that IS pamphlets, car stickers, and flags have been spotted in the streets of Peshawar. Have you seen these yourself? What are the messages?

A 12-page pamphlet released by IS [has been] distributed in parts of Peshawar where mostly Afghan refugees are [now] living. The Pashto-Dari language pamphlet asked people in Pakistan and Afghanistan to support IS in their endeavours to enforce Khilafat in the land of Khorasan. The Khorasan is an ancient Islamic Khilafat that makes up modern-day Pakistan, Afghanistan, Iran, India, and other Middle Eastern countries and Central Asian regions; and some ideologues in these groups hope to reincarnate that state.

We also see stickers on cars in the streets of Peshawar and wall-chalking in favour of IS in southern districts of Khyber Pakhtunkhwa (KP). As you know, people already have sympathies for religious and militant groups in the Federally Administered Tribal Areas (FATA) and KP. So they are welcoming them in various ways.

Is this hype via meager propaganda, or credible momentum that should concern the governments of India and Pakistan?

As far as I know, [this] is not propaganda. Rather, it is a fact. Propaganda is always baseless, or based on rumours. But here is a lethal militant organization [that] has a strong presence in two countries — Iraq and Syria — and [they are] continuously expanding its “state” authority outside the Arab world too. The Islamic State is a fact and it has sent a wave of shock among U.S. and Western leaders. IS is really a big threat for Pakistan and India [too]. The countries have already been badly affected by militancy and terrorism [for a] long time [now]. We can say that [this] is an extra tension for both neighbours, who have been struggling to cope with terrorism [on their own soil].

Which Pan Islamic factions are most likely to join IS from Pakistan?

So far no group has formally announced [its decision] to join IS [from within Pakistan], but there are groups who might join al-Baghdadi in the near future in Pakistan. [The distinction being drawn here is between announcing allegiance and providing operational support].

Jamaatul Ihrar (JI), a new faction of militants who recently parted ways with Maulana Fazlullah-led TTP, seems [interested] in joining IS. The group is strongly believed [to be] in Great Khorasan and IS also wants to expand its authority [to the contours of the] ancient Khorasan region.

JI spokesman Ehsanullah Ehsan, while talking to BBC Urdu recently, said that they can help IS if they were asked. [They said] it is their Islamic duty to go shoulder to shoulder with Muslim brothers. Besides that, many other splinter groups and renegade TTP commanders can go with IS if they were approached.

According to media reports, the fighters of Daish or Islamic State have recently started operations in four districts of Afghanistan’s historical Ghazni province. Quoting deputy governor of Ghazni province Mohammad Ali Ahmadi, the website “Khabarial” reported that several high-ranking members of Taliban and Hezb-e-Islami recently visited Dubai and held talks with the organizers of Daish or Islamic State.

If IS continues to make gains in South Asia — by way of recruitment, fundraising, and operations — does this present an opportunity for the Modi and Sharif governments to work together?

Well, theoretically you can say both the leaders should work together to combat the new challenge. But [that] is practically impossible. India will never trust Pakistan. They blame Islamabad for sponsoring terrorism and using terrorists against India. So cooperation in the field of terrorism is far from factuality.

With IS tapping into both the South Asia populace and the ranks of the Taliban and Al Qaeda, it appears the market for terrorism (or Islamic extremism) has new entrants. Al Qaeda recently announced a new branch in the Indian subcontinent, and IS is now actively recruiting in al Qaeda’s backyard. What are the implications here?

Yes, both IS and the al-Qaeda South Asia branch announcement is a big challenge for this region. It will open new recruitments in South Asia, but al-Qaeda has a very strong presence in this part of the world. In al Qaeda’s latest video, the group’s leader Ayman al-Zawahiri announced the formation of new branch [and has] expressed allegiance to Afghan Taliban Chief Mullah Mohammed Omar, while IS’ self-claimed Amir al-Mu’minim ( “Commander of the Faithful”) is Abu Bakr al-Baghdadi. So many militants group still consider Mullah Omar as their leader. This factor gives some edge to al Qaeda in this part.

IS’ sweeping advance and military success across large swaths of Syria and Iraq this year has caught the international community by surprise and shock. Today, the United States is leading a broad coalition of Western and Arab nations for military action to destroy IS. With inroads into South Asia, where does Pakistan policy toward IS stand?

Pakistan even could not formulate any firm policy against [protracted terrorism and militancy on its own soil]. How will they would challenge IS? After my story about the ISIS pamphlets, the provincial government of my province, Khyber Pakhtunkhwa, decided in a meeting to confiscate the copies and would keep check on people having sympathies with IS.