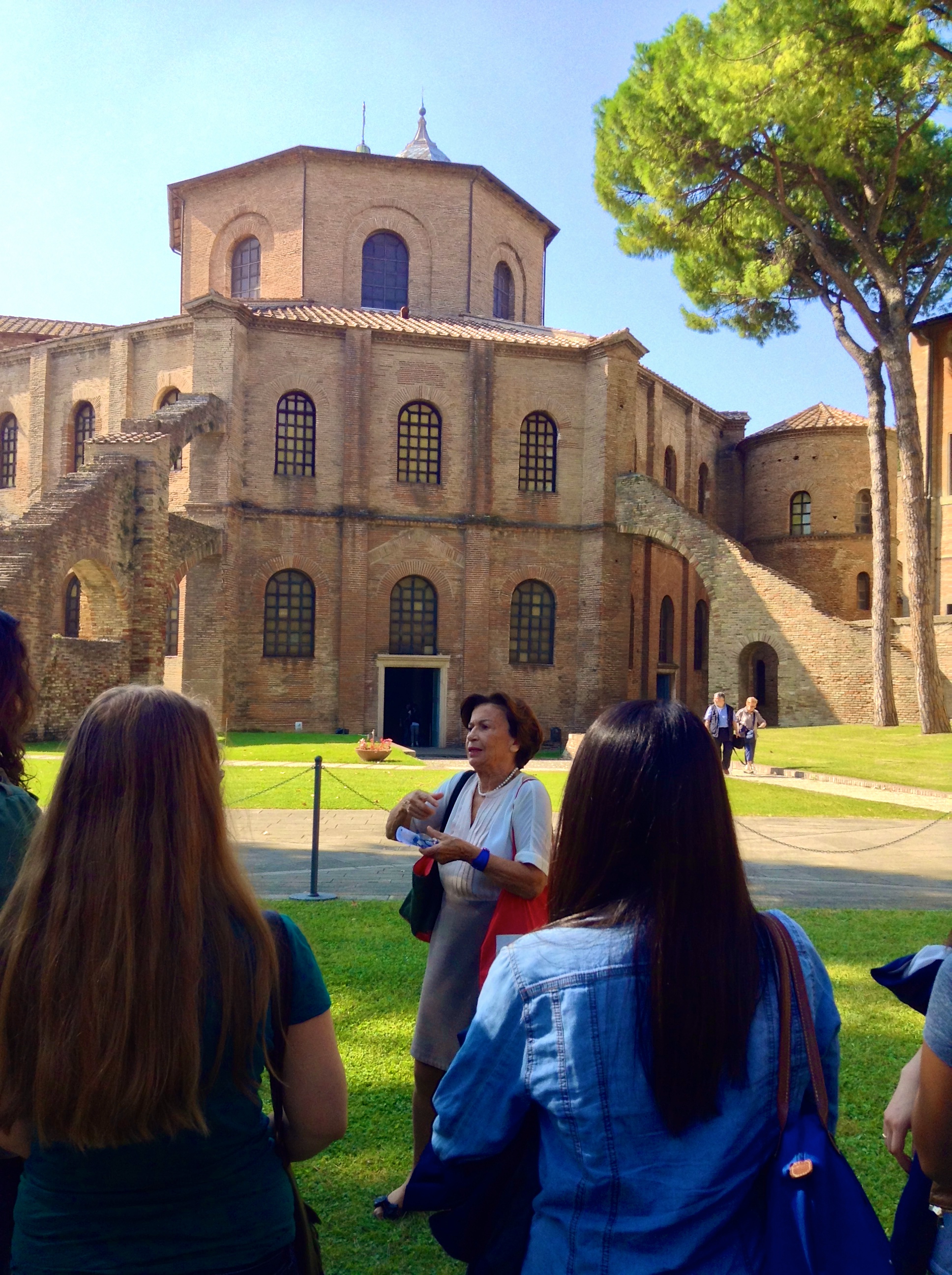 RAVENNA, Italy — Between classes and homework, it can be hard for students to remember to pick their noses out of their books and explore their surroundings. Luckily for students at SAIS Europe, they have a school-sponsored opportunity to escape the classroom and explore the cultural treasures in both the city and the surrounding countryside, all while guided by an art history expert.

The Italian Art History and Culture course offered in Bologna is one way for students to break out of the study bubble and learn more about their host city and country. The seminar, taught by Professor Anna Cavina since about 1980, has focused at various times on modern or Renaissance art, but now has more of a local spotlight.

“Now we try to explore as much as possible some important art history close to Bologna,” she said.

The class meets once a week, mostly in Bologna, but it also has two trips outside Bologna – one to Ravenna, to see fifth- and sixth-century Byzantine mosaics, and one to Florence, to visit the famous Renaissance museums and monuments.

There are many reasons to take the class to these towns, but sometimes the simplest ones suffice. “To visit a wonderful little town in Italy on a weekend is much better than going to the supermarket,” Professor Cavina said.

Twenty-three students woke up early on a Saturday morning to join Professor Cavina in Ravenna, an eighty-minute train ride east of Bologna on the Adriatic Sea.

Among them was Tim Stranske, a Global Theory and History concentrator. “I came to Ravenna the first time I traveled in Italy 10 years ago or so, and I loved these places,” he said. “It was one of the art places I enjoyed the most, so coming back with an expert was very attractive.”

The history of Ravenna is unique in Italy. After becoming one of the regional capitals of the fifth-century Roman Empire (and receiving cultural investment befitting an imperial capital), it was all but abandoned when the western empire was later finally conquered. Counterintuitively, this cultural decline led to the preservation of the artworks still around today.

“I knew about Ravenna as a town,” Madeleine McCartney, an EES student, said, “but I had no idea that it’s just so well-preserved because of the history. It’s really interesting to see that it was a center of culture and then completely abandoned and in some way that made it preserve these amazing works of art.”

The first site the group visited – after a quick pit stop for coffee – was the Church of St. John the Evangelist, which Professor Cavina said had been flattened by American bombs during World War II due to its proximity to the train station, then rebuilt.

Expertly weaving in the history behind the art and architecture, as well as the symbolism within them, Professor Cavina wanted to make sure students knew the whole story behind a piece of art.

“They need to frame it in its original context,” she said. “Religious painting meant something precise. It’s not just a precious object which we appreciate today.”

In the Basilica of Sant’Apollinare Nuovo, built in the 6th century, Professor Cavina described how changing religious and cultural sensibilities were reflected in the more spiritual style of the art. Just a century earlier, the art had been recognizably more humanist, she said.

“We got to see both of them side-by-side, to understand the differences in representation and the different perspectives of Christ more as human or as more of a divine person,” McCartney said. “It was really reflected in the art, and it was really interesting to see it.”

The mosaics were the highlight for Stranske. “I enjoy a big, grand spectacle so the last place we saw [Basilica of San Vitale] was a stunning place,” he said, “but I think I may have enjoyed the little tomb area outside [the Mausoleum of Galla Placidia] just about as much. The light coming through the alabaster was beautiful.”

The art of the distant past has relevance even today, McCartney said.

“I’ve always had the belief that really understanding a culture, whether it’s through the language, the traditions, the art, is really important to understanding where they are today. I think that for people who are studying international relations, this cultural side is really important, and this class offers us the chance to discover it and hopefully fuel a little more about how we think about different countries and the way they act.”