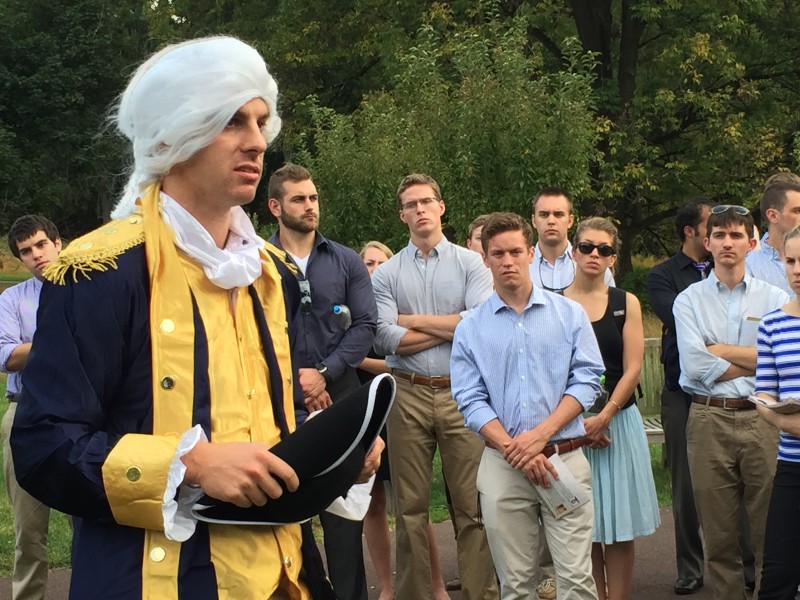 Students Study the Complexities of War

WASHINGTON — While it was over two centuries ago that General George Washington led the Continental Army against British forces in the war for independence, it was just last week that students from across SAIS spent a weekend in General Washington’s shoes. The 2014 Fall Staff Ride, a SAIS tradition harking back to 1990, gives students and faculty alike the opportunity to experience the complexities of war—an opportunity in which over 50 students spent last weekend immersed.

Staff Rides have existed as educational exercises long before they became a SAIS tradition. “Staff rides began in the 19th century as a means for military staffs to examine employment concepts in past battlefields and campaigns,” said Dr. Thomas Keaney, associate director of the Strategic Studies Department. “SAIS staff rides have taken that concept and enlarged them to look much more generally to include the sometimes complex and ambiguous relationships among the leaders, look at how decisions are made, how combat affected the local population, how to assign responsibility for success or failure, and many other areas.”

This semester’s staff ride concentrated on the Philadelphia Campaign where General Washington found himself outmanned and outmaneuvered by British General Sir William Howe. Throughout the two-day trek, students, faculty and a number of special guests traced the path of these two legendary figures as they fought for dominance. Visiting historical sights like Brandywine, Valley Forge, Fort Mercer and Germantown, participants dissected the decision-making process of generals, soldiers and civilians alike, all in hopes of gaining a better grasp on the complexities of war.

As the staff ride’s quartermasters, or directors in modern terms, Rebecca Ward and Garrett Berntsen, said. “This staff ride will serve as a case study through which to learn how leadership, communication, resilience, focus, strategic thinking, and sometimes luck, all affect the outcome of a conflict.”

While staff rides are traditionally led by the Strategic Studies Department, the event is open to all, and students from many departments participate each semester. Bringing all the participants together are the individual presentations, each lasting only a few minutes but requiring intensive research and a bit of theatrical confidence.

“Bringing the historical characters to life presented a personal connection to the battles,” said Ben Chase, a first year Strategic Studies student. “While the readings helped explain what these figures did, the surprising acting abilities of the staff ride participants highlighted pettiness, pride, and complex personalities in a way the texts could not.”

Between stops, there was plenty of food but even more camaraderie. Second-year student Brett Fetterly said, “The thing about staff ride that I always enjoy the most are the discussions that happen on the side of the presentations. Usually these are discussions about the personalities of the characters, their leadership abilities and decision-making processes, and there are a lot of comparisons between that era of history and today.”

Like any major project, there was intensive effort put in behind the scenes. Quartermaster Berntsen said “The Fall staff ride was the culmination of many hours of work from a large staff (12 people). Each of the staff members contributed through planning, researching, producing promotional materials, and even going on seven different reconnaissance trips to the area.”

Between Saturday and Sunday, participants spent the night camping under the stars, enjoying campfire songs and casual facetime with a number of distinguished faculty and special guests. All of these aspects came together to provide a unique opportunity that in many ways defines the SAIS experience.

If you did not get the chance to take part this semester, do not fret. Staff rides take place several times a year, and are a great opportunity to get to know yourself, your classmates and become a part of history. The next one will be the international staff ride to Colombia, where forty students will travel to the jungles and cities of insurgency and guerrilla warfare to study modern conflict. Learn more at www.isr2015.com.