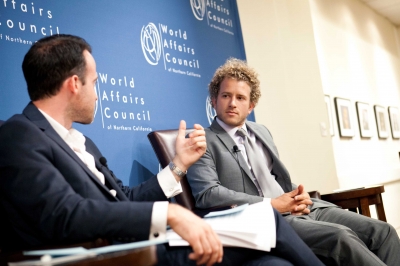 WASHINGTON — Ted Alcorn has followed a unique career path since graduating from SAIS. While a student at SAIS, Alcorn pursued a joint degree at the School of Public Health, graduating with an MHS in International Health and an MA in International Policy with a sub-specialization in development economics. “Leaving the labels aside, it amounted to a long (3-year), quant-heavy policy program focused on improving populations’ health and well-being, as measured and implemented through economic, sociological, and immunological interventions,” he said.

With a dual Master’s under his belt, Alcorn was awarded the Luce scholarship, which took him to Beijing. There, he produced photo and video work and wrote public health journalism for The Lancet, a British public health magazine.

Currently, Alcorn works at Everytown for Gun Safety, where he supervises research and investigations for the largest gun violence prevention organization in the country. He also oversees the deployment of evidence to advance life-saving reforms to U.S. gun laws.

Among his diverse experiences after SAIS, Alcorn sees a common thread: making data meaningful. Whether dealing with spreadsheets from a Department of Health, interviews with liver cancer patients, or police records of gun homicide incidents, Alcorn seeks to highlight the data “so that it can be harnessed to improve the way organizations and governments function,” he explained.

Alcorn’s experiences before arriving at SAIS played a significant role in guiding his career choices, interests, and pursuits while at SAIS. “My background in documentary film has given me an appreciation for storytelling, which is a critical part of making compelling arguments, inspiring people, moving legislators to act,” Alcorn said. By putting him in touch with vulnerable groups, from people in drug and alcohol recovery in Trenton, NJ to genocide survivors in Rwanda, his experience making documentaries helped him to communicate and empathize with people whose situations looked little like his own,  an important quality in striving to provide development aid.

These experiences guided him to SAIS, where Alcorn says he developed the fundamental data analysis and quantitative skills that have bolstered his professional experiences since. “The quantitative classes I took there and then piloted during STCs at the World Bank have allowed me to explore data in all the work I’ve done since. Public policy is based on a strong understanding of what is happening to the whole as grasped through data, not just the parts,” Alcorn said.

The SAIS experience also allowed him to marshal specific skills and adapt them to a wide range of issues that he has dealt with since. “I wouldn’t have anticipated working to reduce gun violence — not because I don’t care about injury mortality (it’s a significant public health issue in the U.S.) or equity (there are enormous disparities in gun violence injury rates across races, ages, and geographies),” he said. The diverse curriculum and student body at SAIS made him comfortable approaching anything, be it geopolitics of oil, modern Chinese history, municipal governance in El Salvador, polio eradication, or leadership in the Civil War.

The SAIS network has proven valuable as well. “Every year I find myself more reliant on the network that I made at SAIS, both students and professors, that move ever outward in their own pursuits and are doing ever more interesting and varied things,” Alcorn added.