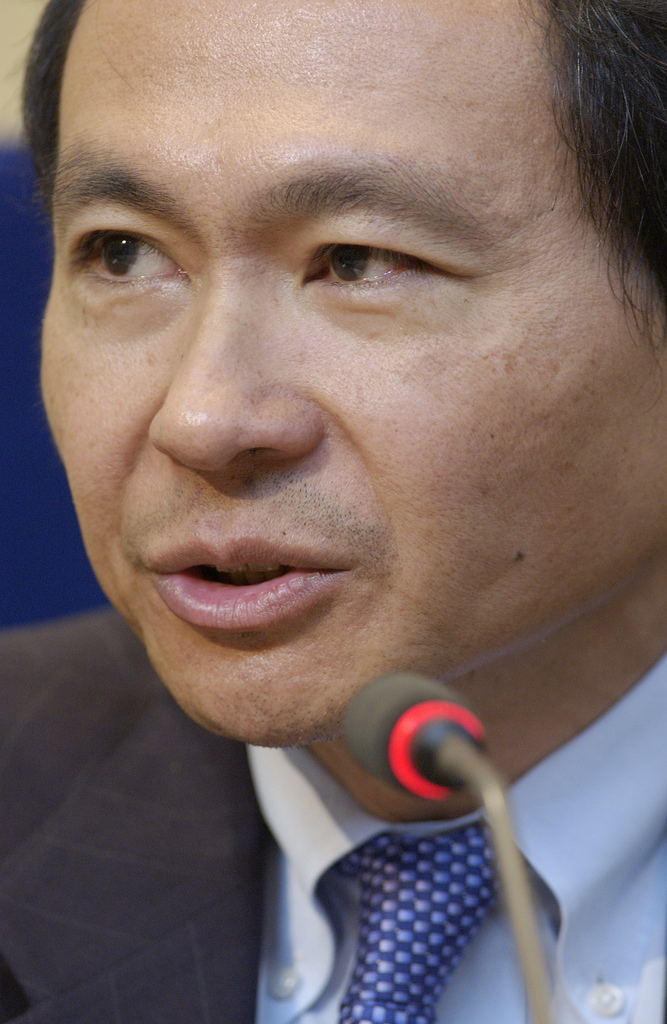 WASHINGTON — On Wed., Oct. 29, the SAIS International Development Program in conjunction with the Foreign Policy Institute and The American Interest brought Francis Fukuyama to Kenney Auditorium for a lecture elaborating on the ideas in his latest book, Political Order and Political Decay: From the Industrial Revolution to the Globalization of Democracy.

Fukuyama is perhaps best known for the ideas in his 1989 essay “The End of History?” on the end of the ideological battles between systems of government. He wrote:

“What we may be witnessing is not just the end of the Cold War, or the passing of a particular period of postwar history, but the end of history as such: that is, the end point of mankind’s ideological evolution and the universalization of Western liberal democracy as the final form of human government.”

Former director of the SAIS International Development program, Fukuyama spent nine years teaching at SAIS DC. Returning to the stage, he remarked that he stood at “a very familiar podium. I’ve given quite a few presentations from this very spot.”

Diving into the state of the world in 2014, he said, “it’s been a terrible year. It’s actually good for students of international relations because you have a lot to talk about.” But from where we stand now, “the world is actually bifurcated, I think,” he said. First, there is Eurasia, bookended by Russia and China, large powers on the move with their own territorial agendas and increasing self-confidence creating problems for their neighbors. Second he named the swath from North Africa through the Sub-Saharan to the Arab world, facing an opposite situation, characterized by almost the absence of states altogether, in cases like Libya, Syria, or Iraq, and neighboring states which are extremely weak.

He went on to argue that while everyone has been preoccupied with ISIS, the group “is not that powerful an actor.” Rather, they are powerful only because everyone around them is weak, with many nominal governments unable to provide the basic functions of the state, from security to delivering services to the people.

Jihadism has been driven into political vacuums in places like Afghanistan, Pakistan, Yemen, the Sahel, Mali, and Cameroon where state structures are not capable of providing basic security. This has significant implications for American foreign policy: while there may be one approach for dealing with unitary states like Russia or China, in this stateless part of the world, policy has depended on America’s ability to create state institutions as a way of controlling terrorism. Once entering into conflict zones, this is often the only way out, working to leave self-sustaining state structures in the place of U.S. military. Thirteen years after the attacks of September 11, “we don’t seem to be terribly good at this.” Regarding Iraq and Afghanistan, Fukuyama argued it is not clear that the U.S. presence is going to leave anything durable in terms of state institutions.

From examples in the current geopolitical situation, he turned to the more abstract theory of states underpinning his new work. He stressed three pillars of the political order, whose relative strength determine how countries differ around the world.

The first pillar is the state. “The state is all about power,” Fukuyama said. States generate and use power to protect citizens, provide infrastructure, and deliver services to citizens. The reason Ebola has become such a severe crisis, he said, is that many of the states where it has become an epidemic either lack public health authorities or the institutions are very weak.

Second is the rule of law. “Law can be used to control a population, but rule of law as I think it’s properly understood only exists if it applies to the most powerful people in a given society, the people with coercive power,” Fukuyama said. If a king makes up the rules as he goes along, it may be rule by law, but it is not rule of law.

While the first pillar is based on power, the second two are based on constraining power, meaning the opposing forces must balance. Fukuyama argues that it is possible to locate any country’s political system based on the combination of these components: too far in one direction or another means a system won’t succeed. When there is democracy but no state to keep order, what you have is extreme state weakness, a power vacuum like today’s Libya. But if you only have a state, then you have a dictatorship, Fukuyama continued, citing China as an example. While its oldest tradition was state-building and bureaucracy, China never developed a real rule of law that could constrain the Communist Party “and they certainly don’t have democracy, so they’re kind of at the other extreme.”

He went on to divide the category of “stateness,” drawing on Max Weber’s ideas of the modern state versus the traditional patrimonial state. The key distinction is a modern state treats its citizens impersonally, with sharp distinction between public and private interests (corruption occurs when public money is taken for private interests). In traditional patrimonial states like monarchies, kings considered themselves as personal owners of the state, and might give away a province to a daughter for a wedding present. Fukuyama believes that today there are no classic patrimonial states with rules claiming personal ownership, but there are neo-patrimonial states where coalitions of elites share rents. Those states are run for the self-interest of the people going into politics, and the distinction between public and private is completely eroded.

More important than the transition to democracy, Fukuyama argues that transition from neo-patrimonial to a modern state is the more difficult and important transitions, and one to which we have not paid sufficient attention. It is much easier to create a democracy than it is to create a modern state. As examples, he pointed to Afghanistan and Iraq, where it was possible to hold “election-like events” which led to the selection of a government, but neither country has yet acquired a modern state, and both remain all deeply mired in high levels of corruption and neo-patrimonial elite rent-sharing. “That transition is the explanation for many of the political failures around the world today.”

He went on to point out that many Americans who look at countries with corruption and elite-oriented politics “and do a lot of preaching about good governance” fail to realize the U.S. went through an extremely similar period in its early history. What the developing countries are experiencing now, “should not properly be understood as corruption, should be understood as an early form of democracy.” Going back to the time of Andrew Jackson, Fukuyama argued, “the United States is the country that invented clientalism.” The early American government was basically an elite body, “friends of George Washington,” and a lot of Harvard and Yale graduates. Against the epitome of this group, John Quincy Adams, the “Boston Brahmin,” Andrew Jackson, a frontiersman and military commander from Tennessee, personified a rise in American populism that displaced this oligarchy. “He was the Sarah Palin of his day running against the John Kerry of his day,” said Fukuyama of Jackson. And in the 1820s, with a host of property-less white males newly eligible to vote, the question was, how to get them to the polls? The easiest way was to bribe them. From Christmas turkeys to jobs in the post office, “this is how Jackson got elected.” It was a patronage system, every official put in place as a payoff.

As none of the actors on the inside had any interest in changing this system, Fukuyama argues that an outside triggering event was necessary for political change. In this instance, he cites the assassination of James A. Garfield by a man who was upset over losing the job of ambassador to France. According to Fukuyama, Congress was so embarrassed they voted for the Pendleton act, and the principle of merit in civil service examination. “The Chinese had invented the same system approximately 2200 years earlier,” but that was the new system put in place.

In this light, democracy in some sense is the cause of the problem of clientalism, but Fukuyama believes democracy can also be the solution. Or at least that “we should hope that democracy is the solution because the other big route out of clientalism is war,” which is how the Chinese state consolidated and modernized, as well as the Prussian and French empires, among others.

And then there is the danger of re-patrimonialization. Lest we think that a modern state once achieved is forever, Fukuyama warns of the problems that ensue if “you’ve come to worship the institutions and therefore you don’t adapt adequately.” This most often occurs through “insider capture,” or when those in power decide “they’d much rather reward their friends and family.” This tends to happen over time, all the way back to the end of Han dynasty in China. To some extent, he sees this as relevant to events in U.S. politics today. As well-organized and well-resourced interest groups proliferate, the question becomes whether or not that collectivity of interest groups adds up to something like public interest.

Fukuyama in part attributes this to the system of government set up by the Founding Fathers, who created checks and balances that tilt toward giving minorities the ability to veto activities of the majority, which has become increasingly pronounced with the polarization of U.S. politics.“In a parliamentary system this doesn’t matter,” but in the U.S. system, it leads to paralysis of the government. As a case in point, he said, “Congress has not passed a budget since 2008,” which is “one of the most basic functions of a government.”

On a hopeful note, he said, “one of the characteristics at least in theory is that democracies can fix themselves.” While in his opinion, America is not doing that right now, the soft power America’s democracy projects continues to be important to other democracies around the world.

Next post Journey of the Hungry
The SAIS Observer Staff