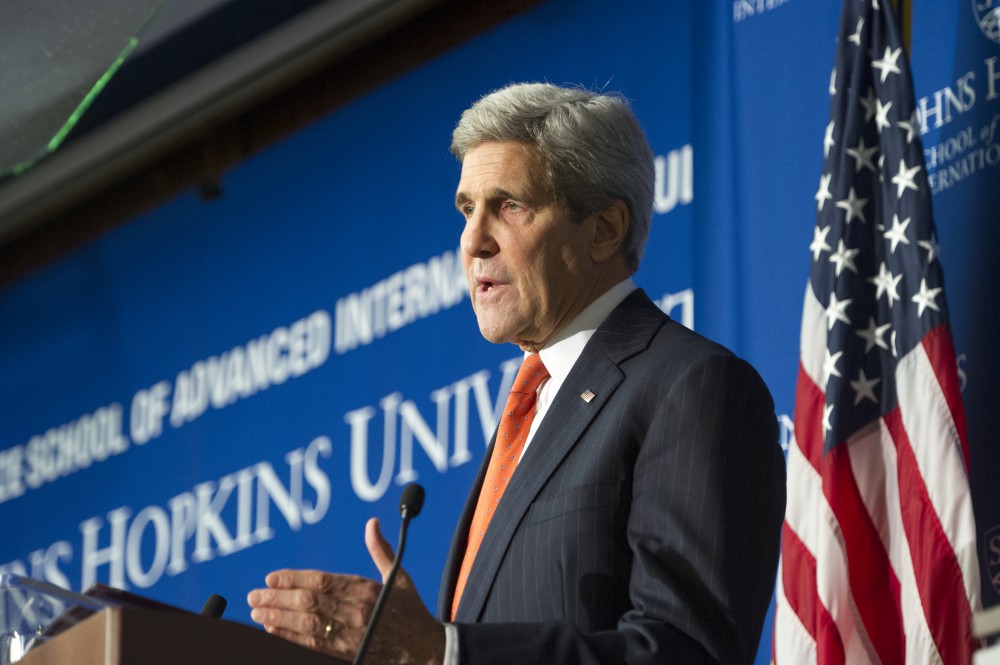 WASHINGTON — Ahead of his trip to the 2014 APEC ministerial meeting in Beijing, U.S. Secretary of State John Kerry delivered remarks on U.S.-China relations Wednesday morning to an audience of students, faculty, guests, and media at the Johns Hopkins School of Advanced International Studies (SAIS) in Washington, D.C.

Mincing no words, Kerry stated, “the U.S.-China relationship is the most consequential in the world.”

“The bottom line is this: the United States and China comprise one quarter of the global population. We make up one third of the global economy. We generate one fifth of the global trade. And when we are pulling in the same direction on any issue, we can bend the curve in a way that few other nations on Earth can accomplish,” Kerry said. Also referring to bilateral ties as “special” and “important,” he said “our relationship has vast potential.”

Behind the language of “potential” and “great opportunities” before the world’s largest economies, Kerry acknowledged the inherent differences of history, political systems, and culture and the two nations’ divergent opinions on pressing international issues. “When we talk about managing our differences, that is not code for agree to disagree,” he said, citing examples where the U.S. and China “do not agree to disagree,” including tensions in the South China Sea, issues of cybersecurity, intellectual property, and finally, human rights.

Although focused on cooperation, the ancient tale of Sparta and Athens in the Melian Dialogue — how a great power contends a rising one — surfaced in the pauses of Kerry’s speech. “We have an opportunity to demonstrate how a major power and an emerging power can cooperate to serve the interests of both,” Kerry said. “And in doing so, improve the prospects for stability, prosperity, and peace around the equator, from pole to pole, throughout this world we live in.”

“Our nations are collaborating to tackle some of the most complex global challenges that the world has ever seen. And we’re able to do that because together our nations are working closely in order to avoid the historic pitfall of strategic rivalry between an emerging power and an existing power. Instead, we’re focused on the steps that we need to ensure that we not only coexist, but that we cooperate.”

From economics to security concerns to climate change, Kerry broached an array of topics. Kerry emphasized China’s global leadership role, and noted that the U.S. “welcome[s] China’s role as a critical player in the Afghan region” and in the Ebola crisis. “That’s global leadership, and that’s important.”

Climate change and energy played a substantial role in his remarks. Citing the most recently released UN climate report, which he called “another wakeup call to everybody,” he said “the science could not be clearer.”

“If the two countries that together are nearing 50 percent of all the emissions in the world, which happen to be also the two largest economies in the world – if they can come together and show seriousness of purpose, imagine what the impact could be on the rest of the world. The United States and China are the two largest consumers of energy, and we are the world’s two largest emitters of global greenhouse gases.”

While a sobering reality, Kerry argued that the upside to the problems of combating climate change is the  potential economic benefit. “You create economic opportunity unlike any that we have ever known, because the global energy market of the future is poised to be the largest market the world has ever known.”

“And none of this will happen if we don’t make it happen,” Kerry said.

These were points that resonated particularly with SAIS students, where the Energy, Resources and Environment has become one of the largest concentrations.

“I found it incredibly refreshing to hear Secretary Kerry unapologetically admit that the U.S. and China, the two largest carbon emitters, must both substantially reduce fossil fuel consumption,” said Alex Fisher, a first-year student from Langhorne, Pennsylvania. “I hope that ensuing discussions with Beijing are fruitful, because the entire international community has been waiting for a bilateral U.S.-China fossil fuel reduction agreement. Until this bilateral agreement emerges, the annual COP meetings are no more than a charade. The hope is that a meaningful Sino-American agreement will allow for a multilateral climate treaty to be drafted in the Paris talks in 2015.”

This appreciation was echoed in comments from Mallory LeeWong, a second-year student from Los Angeles, CA. “As an alum of the Hopkins-Nanjing Center and current SAIS student focusing on China and energy, resources, and the environment (ERE), it was encouraging to hear Secretary Kerry explicitly make expanding U.S.-China cooperation to address climate change the centerpiece of his speech, which sets the tone of U.S. foreign policy just ahead of APEC and key upcoming U.N. climate talks…Secretary Kerry’s remarks echoed the urgency of those made by Secretary of Treasury Jack Lew a few weeks ago at SAIS who laid down the economic argument for adapting to and mitigating climate change in further depth.”

She continued, “Secretary Kerry’s speech probably rang clearly through to many SAIS students, a large portion of whom are here at SAIS because they hope to help address challenges facing the Asia-Pacific and related to energy and the environment.”

Kerry stressed the important role of students in the room, as well as professors, professionals, and citizens. “If this relationship is going to live up to its full potential, government-to-government cooperation alone is not enough. We have to continue also to deepen our people-to-people ties.” More Chinese study in the United States than any other country, Kerry said, citing President Obama’s “100,000 Strong” initiative, launched in 2010 with the goal of increasing the numbers of American students studying in China.

“This is not an earth-shattering new principle I’ve just articulated. It is something that SAIS has long understood. You’ve had an international campus in Nanjing for nearly 30 years,” Kerry said, thanking SAIS Professor David Lampton and others for their leadership towards these efforts. “These connections will help us to understand each other better and to forge a better relationship going forward.”

First-year student Ken Gan, from Hangzhou, China, noted that “first of all, since this was given before his trip to China, everything was looking good and bright, it’d be interesting to hear what he has to say after he comes back, but anyways… I thought it was interesting that Mr. Kerry spent a good ten minutes talking about global warming and energy. Perhaps he was signifying one of the priorities of his trip to Beijing being energy reform?”

First-year student Vincent Mingqi Zhu, also from Hangzhou, said “I was surprised that Secretary Kerry spent almost half of his time addressing the climate issue. Despite the big share of carbon emissions from China and U.S. combined, the two countries are somewhat reluctant in leading the climate talks. And now the oil price has plunged, I wonder if they still have enough motivation to address the issue.”

Secretary Kerry and his team also leveraged social media in conjunction with their visit to SAIS, fielding questions from the Twittersphere about informal meetings and the “rebalance” to Asia in light of America’s other commitments. @JohnKerry responded:

“@ksliney US is fully committed to rebalance – we’re a global power w global responsibilities. This is my 9th trip to E. Asia/Pacific as Sec”

Kerry ended his remarks with the words of SAIS co-founder Paul Nitze, who said of his accomplishments, “I have been extremely lucky. I have been around at a time when important things needed to be done.” Beckoning today’s and tomorrow’s leaders to a familiar call, Kerry said “there has never been a demand more than there is today for important things to be done.” China and the United States are both blessed with “great strength, ample resources, and extraordinary people.”

Kerry will travel first to Paris before arriving in Beijing ahead of President Obama’s trip to the APEC leaders’ summit, and go on from China to Muscat. “I hope that as we come together in Beijing in the days ahead, as we work together in the months and years to come, that we are going to meet that charge and live up to the standard that Paul Nitze said, not just when he founded this school but when he lived his life.”