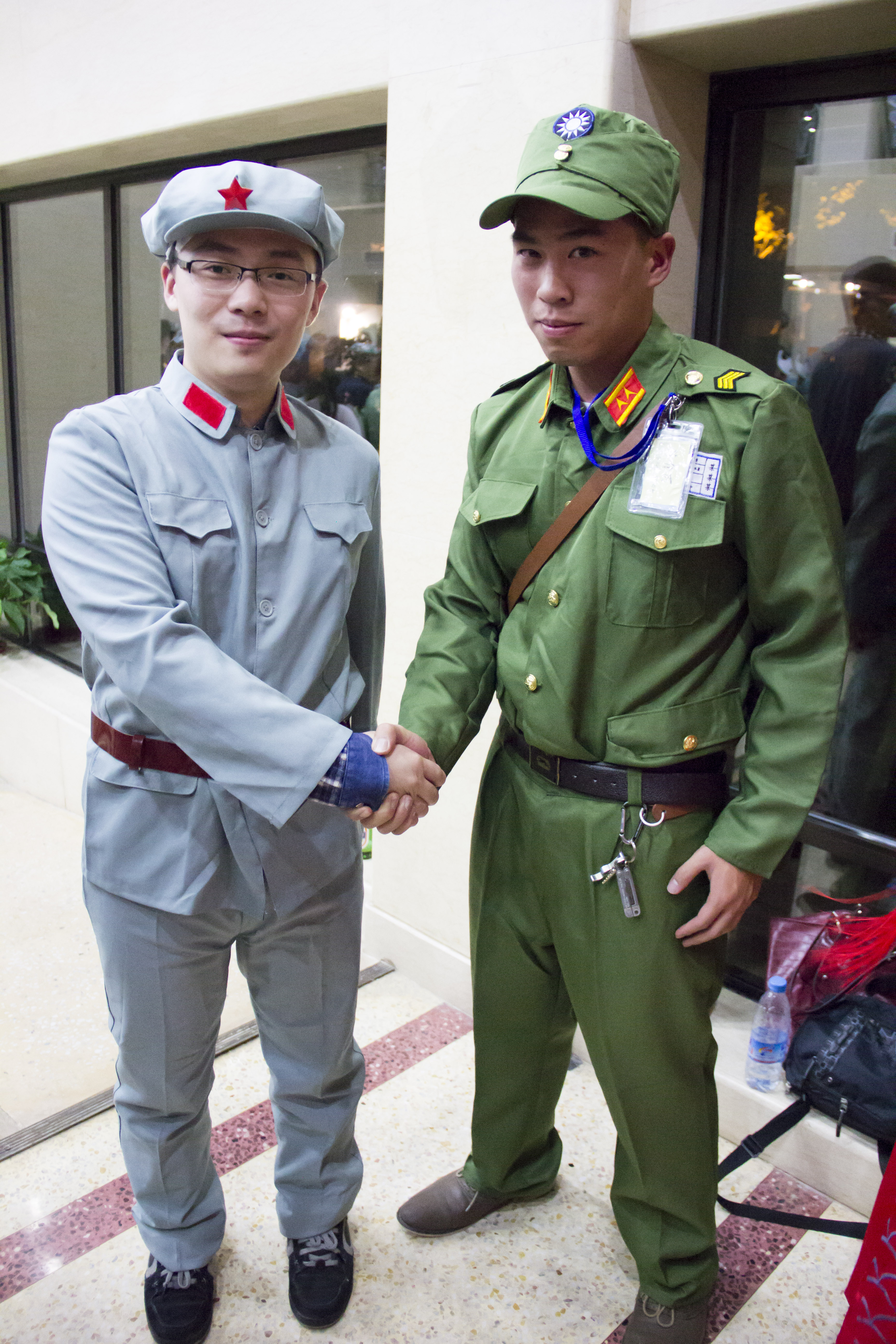 NANJING — On Friday, October 31, HNCers celebrated All Hallows’ Eve with a multicultural party at the Hopkins-Nanjing Center, an event that has been held every year since the Center’s founding in 1986. Students dressed up in a wide variety of forms, from movie characters to Chinese mandarins to anthropomorphizing the historic Communist-Nationalist struggle in costume. Faculty also got into the event, with some students enjoying the presence of a certain professor dressed in drag. All in all, the event was a success. The HNC band, despite having thus far yet to agree on a strikingly awesome name, put on a strikingly awesome show in the auditorium, playing both American and Chinese songs. The center was proud to showcase musical talent and a proclivity to perform Chinese pop songs. Guests from Nanjing University and other local campuses invited by the HNC banwei (student committee) showed up in droves and thoroughly enjoyed all the festivities, particularly the musical display. The banwei sold out the event, a total of 150 tickets, and even granted a few extra tickets to Nanjing University students who “begged” them get in. The HNC was thoroughly packed.

Chinese certificate student Zhang Meng, a member of HNC’s 4-member banwei, provided her own phone number and contact information on posters advertising the event. She took the lead in getting the word out, coordinating with Nanjing University and receiving countless phone calls and text messages. The HNC owes the banwei for their indispensable work in putting on the party. They prepared drinks, snacks, alcohol, and arranged peoples’ roles while also setting up the haunted house, which was a huge hit with HNC’s guests. Zhang Meng stated that the haunted house was the most critically acclaimed part of the event. During the party, banwei members also had to ensure that everything went smoothly, which it did. Zhang Meng, dressed in a traditional qipao from China’s Republican era, says her only regret is that she did not have enough time to enjoy the party due to her many duties. Needless to say, she will be invited back next year.

Halloween in China, known as Wanshengjie Qianxi (“All Saints’ Eve”) or Xifang Guijie (“Western Ghost Festival,” to distinguish it from China’s own Buddhist/Taoist Ghost Festival, Qingming Jie), has grown exponentially in popularity from year to year. It has not “blown up” per se, as it is viewed as an exclusively Western holiday, although more and more Chinese with an interest in the West have been partaking in recent years. In an interview with the Observer, Chinese certificate student Li Ziwei, celebrating her first Halloween, stated that she had been excited for the party for months. Dressed as a fallen angel, Li Ziwei expressed that Chinese students are generally excited for Halloween because they want to try something new and fresh. Zhang Meng echoed these sentiments. The Chinese have several traditional holidays and festivals to commemorate, worship, and ask for protection from the dead. However, the commercial appeal of Halloween is popular around the world, and dressing up in any type of costume is a good time for all.

At the HNC, Chinese students enjoyed a taste of Western culture, which is one of the prerogatives of the Center’s mission. According to Zhang Meng, HNC’s “Halloween party was very attractive to Chinese students because we seldom celebrate Halloween in China.” Li Ziwei, while pointing out how impressed she was with the costumes, agreed with this, though she admitted Chinese people do not apply a particular meaning to Halloween and just try to enjoy the fun inspired by the occasion. Both Chinese students interviewed for this story discussed reading about Halloween in middle school English textbooks and were thrilled to participate in its real life incarnation.

In terms of celebrating Halloween in China, it remains mostly an expat event and focuses on the aspects of Halloween that appeal to adults. Trick-or-treating has yet to catch on among parents and kids, though kids in costume were welcome as guests at the HNC event and received candy. International students at the Center were thrilled at the chance to have a good time for a night in the midst of a busy semester, and Chinese students were excited to see what Halloween is all about. Zhang Meng also expresses her sincere thanks to the many volunteers and the band, who worked hard in preparation every day leading up to the party.