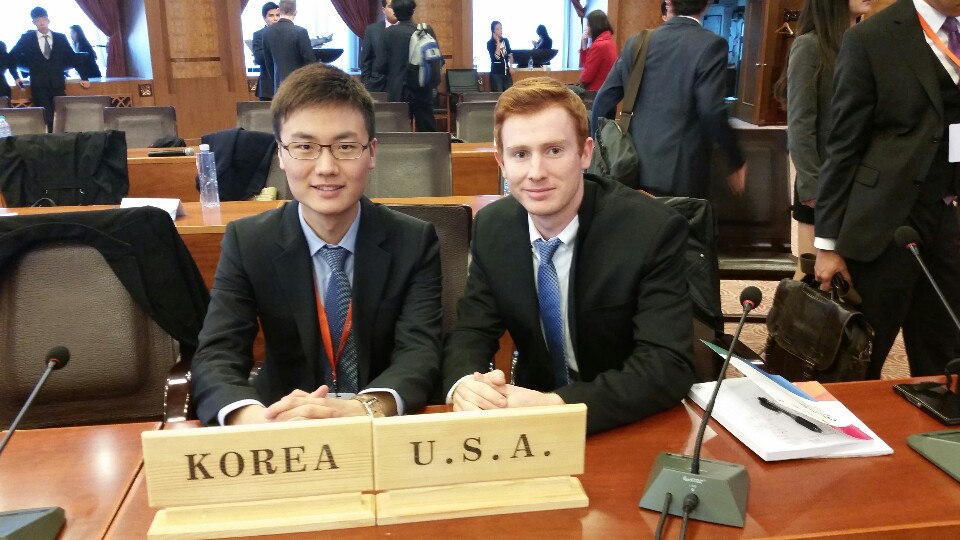 NANJING — From Monday, Nov. 3 to Monday, Nov. 10, two HNC students, Michael Hoffman and Dennis Hong, represented their respective countries, the USA and South Korea, at the Asia-Pacific Economic Cooperation (APEC) Youth Program in Beijing. This program was a precursor to the APEC Summit which ran Nov. 10-11. Each of the 21 member economies at the Summit sent up to 4 youth delegates to the Summit for a total of 60 delegates. One of the topics of the Youth Program was people to people connectivity, and it was clear from Hoffman and Hong’ post-trip discussion with the Observer that, in this respect at least, the Youth Program hit it’s mark.

Activities such as lectures by scholars, a field trip to the Microsoft Research and Development Center, a workshop at Beijing Jiaotong University and speeches by Presidents Barack Obama, Xi Jinping, and Vladimir Putin, helped the youth delegates at the APEC Youth Program come together and forge closer ties in an effort to foster people to people connectivity throughout the Asia Pacific Region.

While the topics discussed were interesting, both Hong and Hoffman agreed that the most important aspect was meeting new people. “The most valuable part of it was meeting people from all over [the Asia-Pacific] who are at the same stage as us, starting their careers or still in school,” Hoffman said.

Hong concurred, adding “the most important takeaway, at the end of the day, is not necessarily the topics that were discussed, but the opportunity to meet young students from different countries that have the chance to 交流 (jiāoliú), interact, to make relationships. The main goal of the program was to have young people from across the region come together.” He added that he saw the Youth Program “as an opportunity to meet people from different economies, the 21 Asia-Pacific economies, and to be able to discuss these issues within this great program designed for us”.

It was clear that the Youth Program succeeded in bringing Hoffman and Hong closer together. They finished each other’s sentences in a way that made it seem as though they had known each other for years, as opposed to having just met a mere two months ago.

While Hoffman and Hong certainly bonded, they didn’t miss the opportunity to make the most of the experience and form new friendships. “People didn’t break up into cliquey groups based on nationality. I was really impressed with that, I was really impressed by the quality of the people in general,” explained Hoffman.

In the vein of people to people connectivity, Hoffman recalled that “one of the things announced during [one of the speeches] was the visa extensions,” for Chinese and Americans. As Hong explained it, “the visa agreement between US and China is an effort to strengthen people to people ties between the two countries, and those two are the two most important countries, the so called G2, and for them to have such an agreement sets a good tone for the world. When these two countries can work together the world will be a better place.”

Conference attendees, as Hong observed, were probably among the first to hear about the extensions.“Everyone was going crazy at that time, everyone was like, ‘Woo, woo!’ You know, I wasn’t that excited because it doesn’t apply to me,” Hong, who is Korean, quipped.

When asked about concluding thoughts, both paused and then expressed how grateful they were for the opportunity and how much they both learned. “I hope that in the future more people take advantage of opportunities like this. These experiences are things that cannot be learned in the classroom,” said Hong.

Hoffman mentioned that, since he is taking his first economics class this semester, most of the material covered at the summit was relatively new to him. However, he still said he felt that, “I got a ton out of it just by listening. It was very valuable for me.”