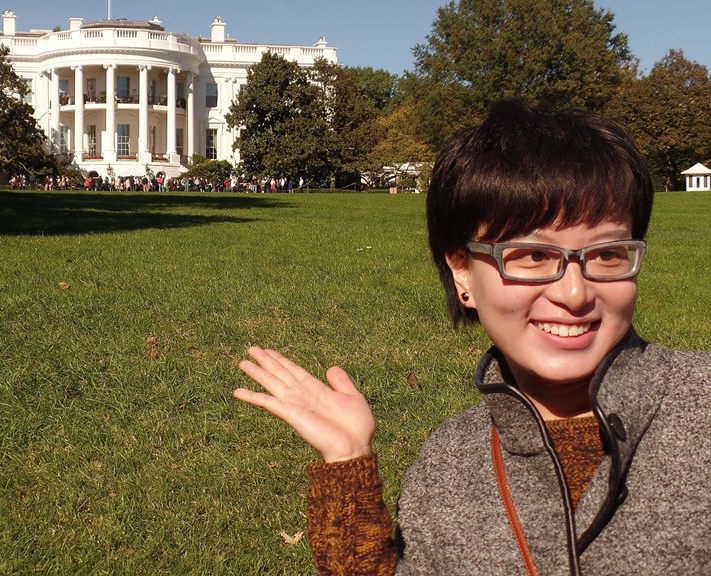 BOLOGNA — “Several years ago, a friend of mine complimented me by saying that I have a good knowledge of common sense,” Zhaoyin Feng said. “I hardly took it as a compliment and was confused by it, but now I see where is this came from.”

A recent grad, Zhaoyin concentrated in General International Relations (IR) at SAIS, where she spent her first year in Bologna. Now she works as a reporter for the World Journal in Washington, D.C., the largest Chinese language newspapers in North America. Born and raised in the southern part of China, Guangzhou, Zhaoyin has made “the big moves” of studying abroad in Italy and the United States.

“Coming to SAIS was a big transition for me. I had never studied abroad previously, and I really enjoyed gaining independence and living far away from home.”

Her desire for independence does not end at just moving away from home. More importantly, she has gained her independence in other aspects, such as being able to make her own choice in both academic and professional life. While at SAIS, Zhaoyin was the assistant editor of The SAIS Observer, where one of her articles, General IR, A Disadvantaged Concentration?, made the front page of the school’s newspaper. In the article, Zhaoyin analyzed both the benefits and disadvantages of this concentration. As a General IR concentrator herself, Zhaoyin enjoyed the flexibility of this program and said that it has better prepared her journalism career through providing her a great amount of “common sense.”

This great amount of “common sense” which Zhaoyin learned from SAIS has indeed helped her to come closer to her dream. Speaking of her professional experience, her time with various media outlets across both print and broadcast media have paved the road for her to become a reporter after SAIS. She has worked with Russia Today Television, Voice of America and Southern Metropolis Daily among others.

Now working as a reporter in Washington, Zhaoyin covers a variety of stories ranging from think tank events to Chinese local communities in Maryland. Besides covering stories from her assigned beats, her identity as a reporter from Mainland China has added more excitement to this Taiwan-based newspaper. Zhaoyin has also devoted much of her time in covering stories related to the U.S-China-Taiwan relationship, in which her experiences of having been lived in all three places have helped her to form a better understanding of this topic.

She undeniably has enthusiasm to share with others. Besides her job as a reporter, Zhaoyin started her own blog last year and has been regularly updating it with articles written in both Chinese and English. A social media guru, she also shares stories and pictures daily on her WeChat account, a popular mobile text and voice-messaging app in China.

When I asked about a significant lesson she learned through her work as a reporter so far, Zhaoyin replied straight away that it was from an interview with Eric Liu, the former speechwriter for President Bill Clinton. Zhaoyin interviewed Liu during a book discussion of his new book, A Chinaman’s Chance, in Washington this past summer.

“Liu’s book has enlightened me of the issue of diversity within our society,” Zhaoyin said. “Since I came to study abroad, I have been trying to detach away from my own identity. As a reporter, now I try to write stories separated from my own perspectives and stereotypes,” she added.

Speaking of SAIS students, Zhaoyin said “We do not seize the moment. The moment seizes us.”

“I really enjoyed my time at SAIS. While in Bologna, I dedicated my time to focus on making lifetime friends and studying, ” Zhaoyin said. “I would recommend students to throw yourself into the great SAIS environment now.” To end our conversation, she used an interesting metaphor: “to open every single one of your pores in your body to absorb the current moment.”

Next post In Search of Destination: The Nanjing Temple
sgrosve2