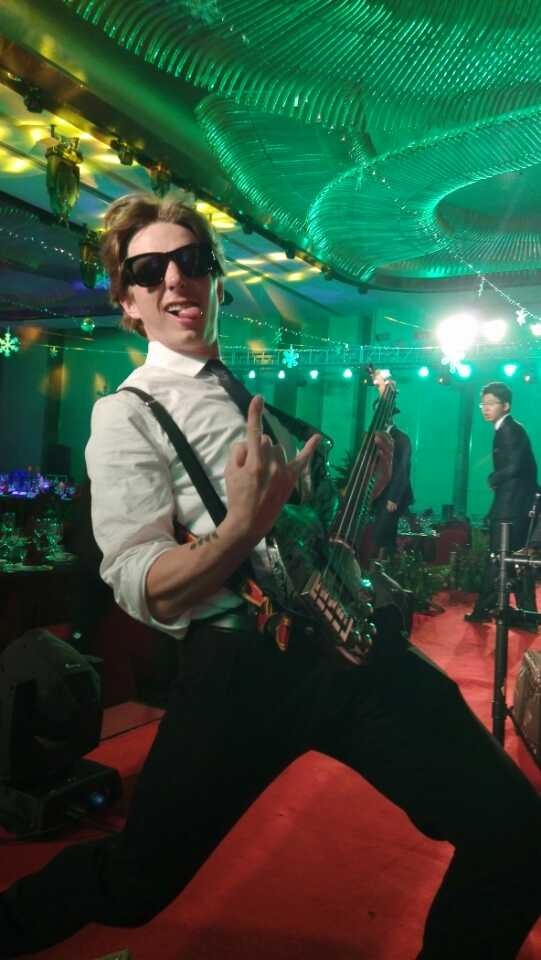 NANJING — As mentioned last week, the Chinese culture of face manifests itself in many ways and in many different forms. One I have had extensive experience with is the foreign entertainment industry. Chinese people currently have an infatuation for all things Western: the clothing, the TV shows, the culture, and this includes having foreign friends, dating foreigners, or having them come to your business or show as entertainers.

Last year I was approached by a friend, Leven Smith (Lev), about playing a commercial gig after he saw me playing bass in a bar. I agreed, but I wanted to know what songs we had to play, who the other musicians were, and what the show was. To my surprise, he told me not to worry about it. I was confused and started pressing him about it. How can I play if I don’t know the songs? When will we practice? Who are we playing for? His response was, “Man, you’ll see when you get there.”

After incessant hounding, he finally relented and sent me a song list (three songs). Armed with these songs and the subway station I needed to go to, I set out from my house for the gig. Upon arrival, I was met by the Chinese agent who directed me into a new housing complex that was still being built. They had finished the main sales office and work had started on the residential buildings, but these were still far from completion.

Once inside, I realized I was the first one there so I started to take a look around. The stage was outside and the staff was setting up the tables, food, and bar for the guests. As I would later find out, the purpose of the event was to sell the residential units. Along with the band there were foreign samba dancers, Chinese ballet dancers, a Chinese DJ, along with a number of cute waitresses dressed as “bunnies” (not the cute, cuddly kind).

As the rest of the band started to arrive, I started inquiring about details such as when we would play and for how long, to which Lev responded, “Man, relax, it doesn’t matter.” I protested and asked how we could play the songs if we’ve never practiced before, but he said, “Don’t worry, bro, it doesn’t matter, if you don’t know the songs just fake it.” Wait, what? Fake it?? “Yea bro, just turn your sound off and pretend to play.” But won’t they know I’m not playing? “Nah man, shouldn’t be a problem.”

That was my introduction to the world of foreign entertainment and faking it. After our conversation, I felt a little relieved (or bamboozled?) and the night went off without a hitch. I actually did know most of the songs we had to play (two out of three ain’t bad) and just “faked” the last one (which was…interesting).

Over the next few months this strange phenomenon of hiring foreigners to dance, sing and entertain the Chinese became more normal. When I asked Lev what he thought about his experience, he said, “Looking back on it, sometimes I can’t believe the ridiculous things I’ve done under the pretense of being a ‘foreign’ entertainer. My experience is both both varied and extensive, ranging from pretending to be a woman’s health doctor to performing magic tricks with Maxwell coffee to faking playing pop music in front of a thousand people while playing a guitar that’s not even plugged in.”

I once met a man named James David, a musician turned band manager, who had started a company by putting together foreign bands for shows. I was rather surprised that he was running a business, but he said, “you wouldn’t believe the kind of money that Chinese people are willing to spend on foreigners.”

Why was this? I had to ask James’ best agent, Joe Yan, who was Chinese, to see if he could explain it any better.“It’s all about face. The client just wants some foreigners up on stage because it looks better. If you have foreign entertainment, it means that you have money and a high status because you are able to get foreigners to come and entertain your guests. This is just one way for them to get more ‘face.’”

Previous post Foreigners and “Face” in China (Part I)