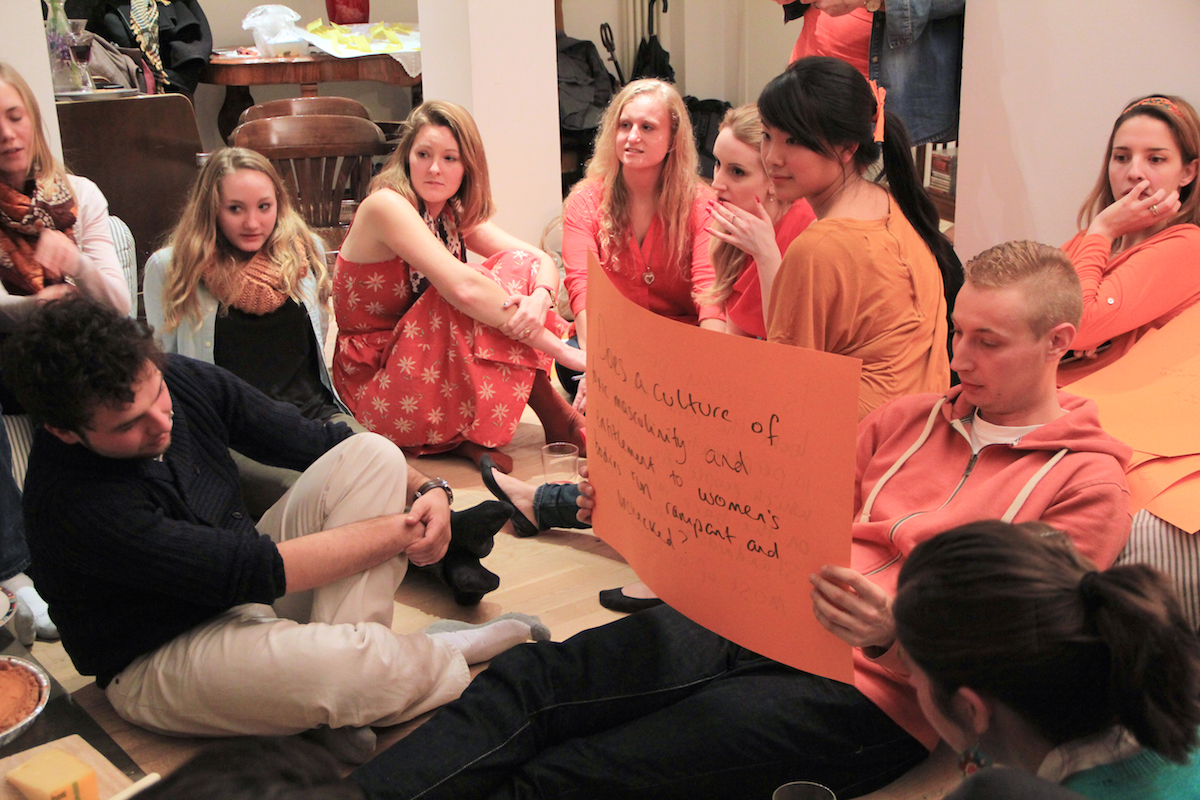 BOLOGNA — There was a prominent orange hue on the SAIS Europe campus Tuesday, Dec. 2, but it was not the long-lost sun reappearing. No, it was the SAIS community taking a stand as part of the UN’s Campaign to End Violence Against Women.

The day’s events – wearing orange to raise awareness and an evening workshop – were organized by the Women in International Affairs club.

They posted fliers around school in the days leading up to it and encouraged everyone to wear orange to school on Tuesday as part of the UN’s #OrangeUrHood campaign to raise awareness.

Students contributed the bulk of the orange, but they were certainly not the only ones wearing it. “I was really impressed,” club vice president Eloise Waldon-Day said. “Loads of the staff turned up in orange, which was really good.”

Waldon-Day also set up a table in the lobby full of orange items to wear for those students who did not have any.

The period between Nov. 25 (International Day for the Elimination of Violence Against Women) and Dec. 10 (International Human Rights Day) has been designated by the UN as 16 Days of Activism Against Gender-Based Violence.

The death late last month of a German woman who had stepped in to stop an episode of harassment is only the most recent story.

“It was fuel to the fire,” Waldon-Day said. “There’s so many of these stories that come out. There was this guy in the States who was stabbed for getting someone to stop cat-calling his girlfriend, a woman recently who was killed for fighting off someone who was attacking her on the street and now this story, so there’s been a few recently about people trying to stand up for themselves.”

The evening workshop, hosted at a club member’s apartment, had a turnout of about 25 to 30 people, fairly even split between the two genders. The event received rave reviews.

“It was probably one of the best evenings at SAIS so far that I’ve experienced,” attendee Marko Grujicic said.

Waldon-Day said she based the workshop on some she did last year as part of her training to be a rape crisis counselor. The activities largely centered around sexual violence, how it is defined by different people and different ways of responding to it.

“It was things like getting people in small groups to come up with a one-line definition of consent or handing out scenarios and talking about the grey areas, what is an appropriate response to the situation, has consent been given in the situation, to explore that murky area,” she said.

Other activities included deconstructing myths around rape and writing down things that they could do individually or that the student body as a whole could do to make a difference, like calling out people’s comments or making sure friends are OK and generally creating an awareness.

Sam Harper, another attendee said that type of event was exactly why she chose to attend SAIS.

Some of the most rewarding experiences for Waldon-Day were the conversations she had at school.

“I had a really good conversation in the student lounge,” she said. “I was writing up questions, such as ‘what percentage of rapists never go to jail?’ or ‘how many times does a woman (on average) have to be battered by her partner before she’ll go to the police?’ – it’s 35, by the way, a terrifyingly high figure. The people sitting in the room were beginning to try to answer them. It felt like a constructive, productive way of dealing with it.”

Grujicic, who comes from Serbia, said he found the data eye-opening and that he had no idea the statistics were so bad for places with strong democratic traditions.

“I didn’t know the data for exact numbers of people who survived violence, physical and mental violence in everyday situations,” he said. “For example, they had data from the U.S. and the percentage was extremely high and we were like, ‘No, that’s not possible.’”

While the club is primarily focused on advancing women’s careers, this was an issue that seemed especially relevant.

“There’s a sense that this is something our generation really needs to step up to,” Waldon-Day said. “At SAIS we’re supposedly young leaders going to go out and change the world, so it feels like creating that culture here, of communication, constructive approaches to things like sexual violence, we can take that out into the world.”

Next post SAISers “Walk Out” For Justice
Zoe Guo