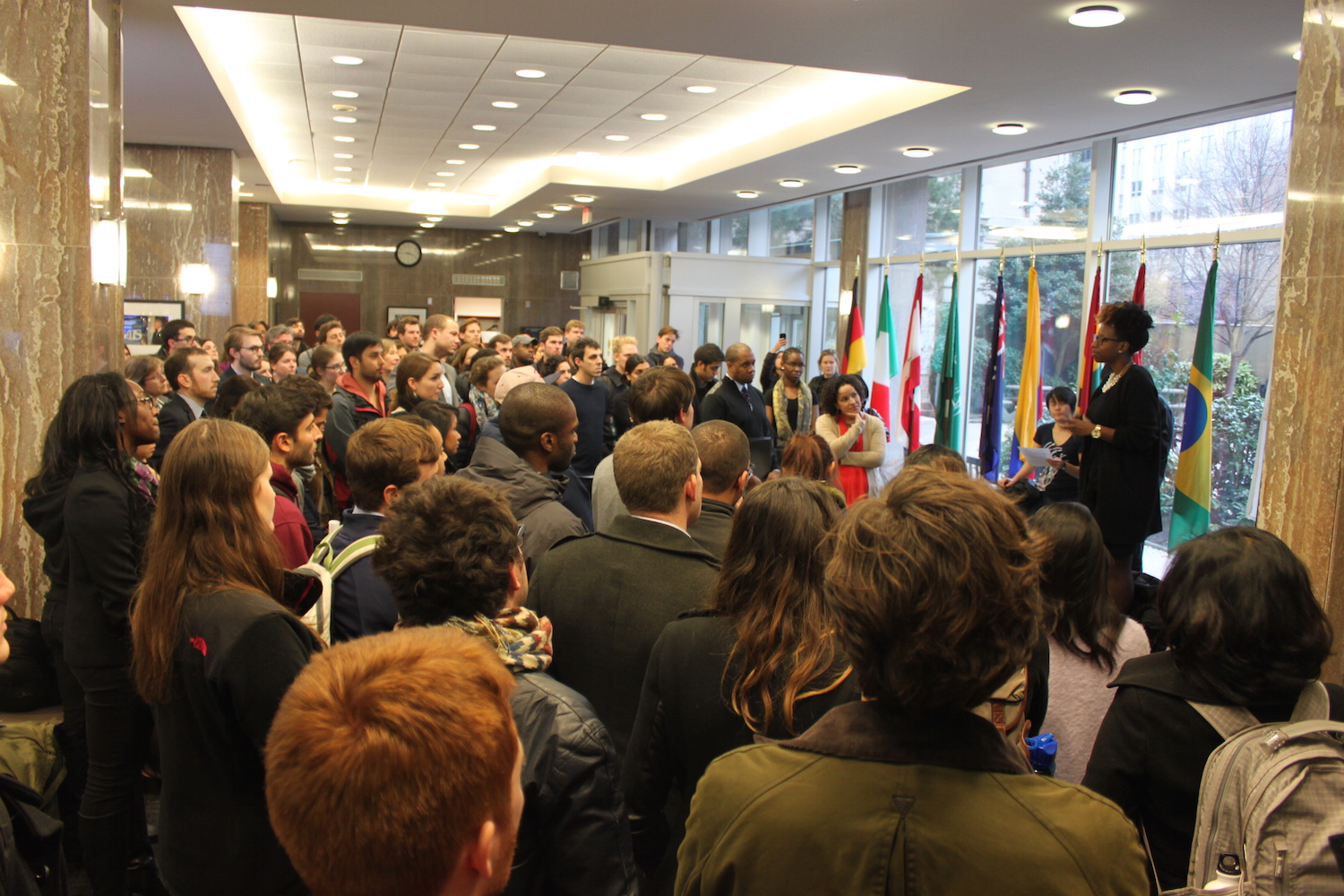 WASHINGTON — At 3:30pm on Wednesday, Dec. 2, the Nitze lobby swelled with students, faculty, and administrators gathered to hear second-year students Cory Bullock and Amanda Roach speak spontaneously about rising racial tensions in the United States in the wake of the Staten Island grand jury decision to not indict police officer Daniel Pantaleo in the July 17 death of Eric Garner.

“I was sitting in class angry,” Bullock said. “After the decision was made, a friend of mine from [the New York foreign policy school] SIPA said they were staging a walkout in protest for the decision. Being a prominent foreign policy school, we should also be at forefront of domestic issues too. I saw her posting on Facebook, and I thought we should do something too.”

In short order, Bullock and Roach drafted a message to send to the SAIS community for social media, the administration, and the SGA. Their aim was to raise awareness. “The walkout is a peaceful sign of protest and solidarity in light of historic and recent injustices in Ferguson, MO, Staten Island, NY and beyond,” read the forwarded email from the SGA. “As students, administrators and professors in a world-renowned foreign policy institution, we should also stay abreast of human rights inequities here in America.”

Once the lobby filled, Bullock stood on a chair and shared a few words. “I’m actually shocked by the turnout,” Bullock started. “[Recently, there have been] two high-profile cases of young black men being killed by police officers. [And] we just learned in the past week one of the indictments [for the Eric Garner case], so this sends a message in the United States and the world on the value of black life here.”

Bullock continued, “It’s sort of embarrassing that we teach human rights and democracy abroad, that we talk about the Shia and Sunni conflict abroad…but for some reason we are so uncomfortable talking about these issues here in the United States.”

An estimated seventy-five people attended. Many students walked out of class. Administrators left their offices, and a few passerby stopped to listen. “We wanted to show solidarity among IR schools,” Roach said. “For many weeks, it seemed people were not talking about these issues inside.” After the event, a group of SAISers went to related rallies at the Justice Department and the White House.

“I was overwhelmed by the support,” Bullock said. “I was comforted by the fact that so many of my colleagues were interested in this cause. No one was vocal about it and [after] so many students came up to me. A lot of students were interested in discussing this issue, but there was no forum for it.”

2 thoughts on “SAISers “Walk Out” For Justice”

Previous post SAIS Europe Goes Orange For A Good Cause
Next post I Can’t Breathe: The Case for Police Cameras
Zoe Guo