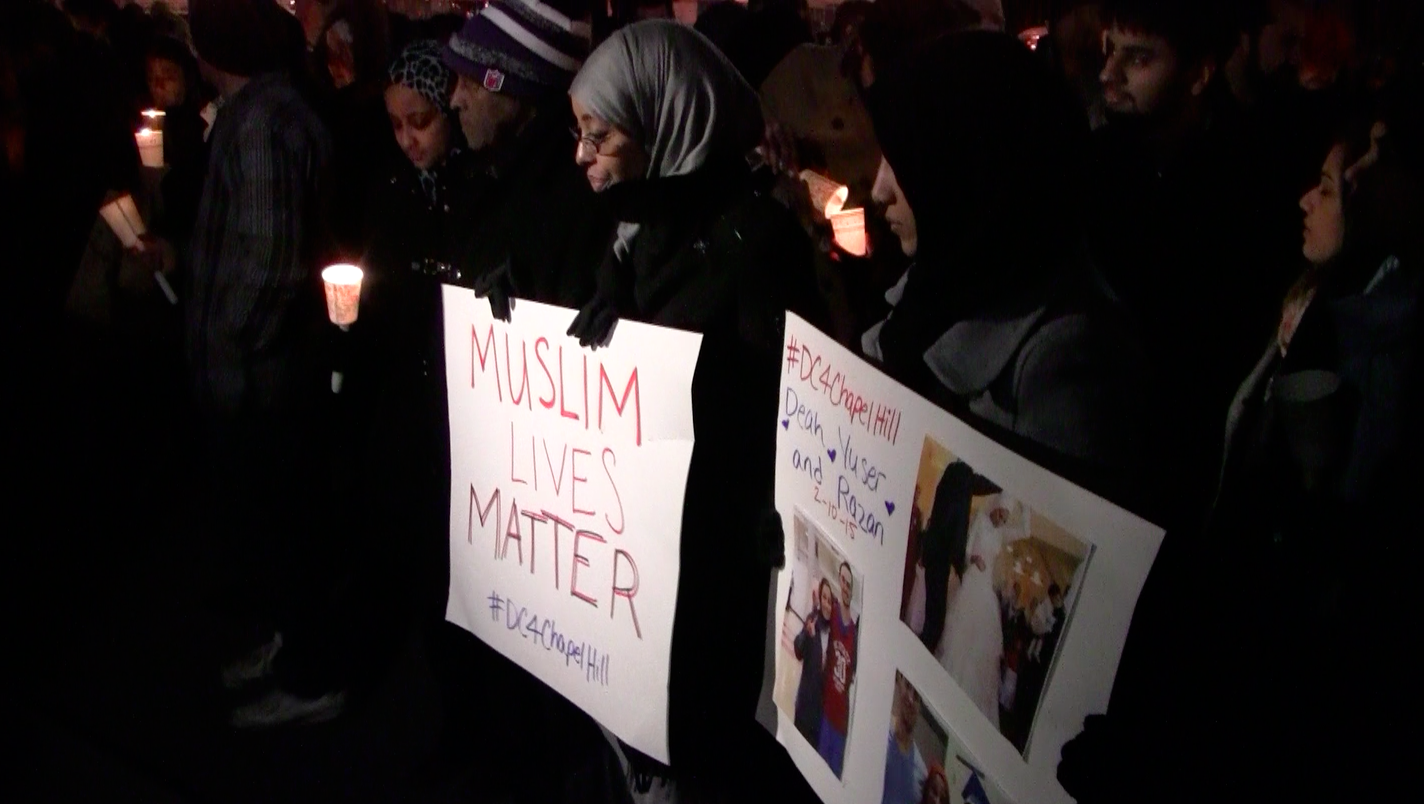 “We call together this vigil to provide an opportunity for all of us to grieve together and to remember the victims in North Carolina… who were brutally murdered on Tuesday,” said Zainab Chaudry, spokesperson for the Council on American-Islamic Relations (CAIR), the largest Muslim advocacy and human rights organization in the United States and co-organizer of Thursday’s vigil with other community groups including the Shoulder to Shoulder Campaign and Jewish Voice for Peace.

“It’s hard to figure out where to go from here, especially for the broader American-Muslim community,” Chaudry said. “A lot of people have asked how do we cope with this tremendous loss? How can we heal, and make sure that something like this never happens again?”

Surrounded by dozens of cameras and journalists before a tightly-packed crowd, she answered her own rhetorical question, saying, “[it] will require us to follow the example of these three remarkable individuals. It will require us… to make sure that the rhetoric that creates fear and misunderstanding towards Islam and Muslims is corrected, that we work to shape our own narrative so people do not fear Muslims, they do not hate Muslims because of what they see in the media.”

While some speakers spoke mostly about the victims, others touched on themes of solidarity, interfaith dialogue, and even politics.

“These three wonderful young adults, students, newlyweds were living the American dream, but like too many Jews, Blacks, Native [inaudible] Americans, and others, they are the victims of hatred,” said Seth Morrison, a member of Jewish Voice for Peace, a grassroots community of activists that opposes anti-Jewish, anti-Muslim, and anti-Arab oppression and bigotry.

“They deserve to be honored with all who have lost their lives for Kiddush Hashem,” a religious concept meaning “Sanctification of the Name” which Morrison explained was developed to remember victims of “senseless violence,” the kind he said that stems from anti-Semitism and Islamaphobia. Morrison added, “We all know that if a Muslim man had killed three Jews or Christians or Atheists or Hindus, it would be a terrorist act. It would be a hate crime. And people from every possible group would be out here to mourn them.”

A group of SAIS students also attended the vigil, including second-year student Marwa Ibrahim, who organized a moment of silence event at SAIS the day before with first-year student Samer Mosis. “When Muslim students are shot in the head or a Black man is strangled to death, or an elderly Indian man is beaten into paralysis, I don’t think we need much persuasion to accept that these are hate crimes and stand in solidarity with the minority group that is being targeted,” said Ibrahim.

“Justice will not be served until those who are unaffected are as outraged as those who are. These are Benjamin Franklin’s words, and they resonate with the wide success of the hashtag #MuslimLivesMatter, and the diversity of speakers and participants who came to the Dupont Vigil.”

Beyond nostalgic words from roughly half a dozen speakers, signs were also seen standing below and above the crowd evoking themes of remembrance and political activism in the 30-degree weather. One sign read “Muslim Lives Matter” with the hahstag “DC4ChapelHill,” showing photos of the three students wearing smiles. Another read “Islamaphobia is a hate crime.” And another, on bright yellow poster paper, read “Stand Against Anti-Muslim Bigotry.”

The deaths sparked a debate on social media around the globe and received condemnation from world leaders. In the wake of the news, Turkish President Recep Tayyip Erdogan on Thursday criticized U.S. President Barack Obama for his silence, saying, “If you stay silent when faced with an incident like this and don’t make a statement, the world will stay silent toward you.” On Friday, President Obama publicly condemned the shootings. “No one in the United States of America should ever be targeted because of who they are, what they look like, or how they worship,” the president said.

News reports and police statements following the triple homicide suggested a parking dispute motivated the suspect, however many in the American-Muslim community believed the shootings were a hate crime. The suspect, Craig Stephen Hicks, 46, who turned himself into police, had anti-religious messages on his Facebook page against both Christianity and Islam, according to media reports.

“This was not a dispute over a parking space; this was a hate crime,” said Dr. Mohammad Abu-Salha, the father of the sisters Yusor and Razon, on Friday. “This man had picked on my daughter and her husband a couple of times before, and he talked with them with his gun in his belt. And they were uncomfortable with him, but they did not know he would go this far,” he said. The Federal Bureau of Investigation has launched a “parallel investigation” into the death of the students.

Deah was a dental student at the University of North Carolina, where his wife Yusor had been accepted to enroll in the same program beginning in the fall. Razan was a student at North Carolina State University. Deah and Yusor were newlyweds who married in December. All three were buried Thursday in North Carolina.

“Growing up in America has been such a blessing. And although in some ways I do stand out, such as the hijab I wear on my head, the head covering, there are still so many ways that I feel embedded in the fabric that is, you know, our culture,” Yusor said in an interview last year with her former teacher Mussarut Jabeen for StoryCorps.