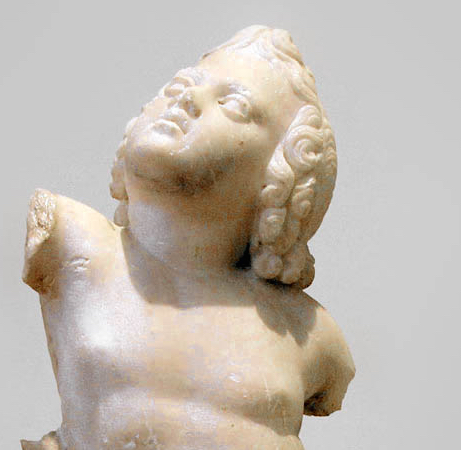 By Plutus, Son of Demeter

MOUNT OLYMPUS, GREECE — Lo, as if two thousand years of indifference to the pantheon were not enough, the Hellenic children now invite the wrath of I, Plutus, your god of wealth! Patience, Greeks, and I will bestow upon you the eight trillion drachma you need to pay your crippling foreign debts and remain a solvent member of the European Union. The Delphic oracle has foreseen that this precious four-month reprieve you have secured with the Teutonic tribes of the north is a false comfort. You had best put your faith in me, children of Zeus, to lead you out of this fiscal labyrinth.

Have you forgotten, Hellenes, that I am lame of leg, slow in arrival, and blind s0 as to dispense my gifts without prejudice? Any sensible economist would tell you that it is time to return to the ancient policy of bull sacrifice and sweet wine libations, so that my riches may find their way to you in good time. Instead, you forsake my name and grovel to Njord, my Germanic cousin-god, a competing bestower of land and wealth. Be warned that you are barking up the wrong pantheon, for Njord will never honor his promise of bridge financing with which to forestall an impending liquidity crisis. How you tempt the fates!

You think you can avoid bank runs without partaking of my horn of plenty? The gods laugh at your hubris! My cornucopia flows with all the capital injects you could possibly desire and yet you ignore me and spit in the face of your peril. I need not be Lord Elgin to see that you’ve lost your marbles.

But perhaps what you’re really trying to tell me is that I’d best accept that the age of the old gods is past. That what Greece needs now is a E.U. with a sensible fiscal policy to compliments the monetary union. You want real reforms, not fickle deities, to prevent hyperinflation, capital flight, or at worst a failed state.

Well then, go ahead! Throw your “Hail Mary” or whatever Judeo-Christian nonsense ritual you are infatuated with this century. Are you really turning to the very people you borrowed from and asking them for forgiveness? Driving out the moneylenders indeed.

But if that plan does not work, and you insist on spurning me still, you could always turn to Cai Shen, the Chinese god of prosperity. He has a reputation these days for being loose with his lending purse. Gain his trust by holding a feast in his honor. Then, in promethean style, rob from him his iron instrument that transmutes rock into gold! Truly, it is a far better scheme than issuing more junk bonds.

This piece is part of The SAIS Observer’s Satire column.