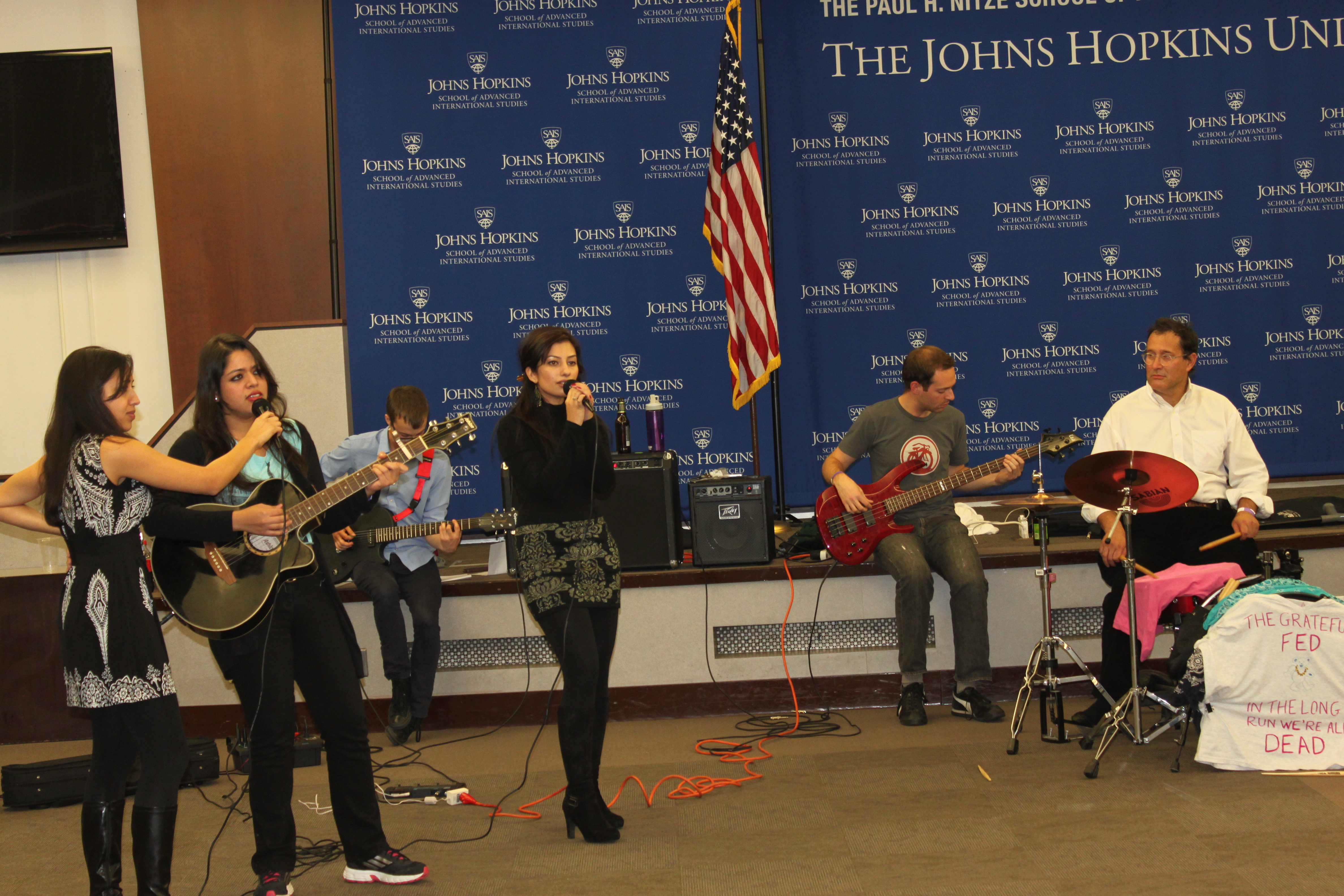 WASHINGTON — SAIS Students, staff and faculty consume music readily in studies, research sessions, and at happy hours and events around the Washington, D.C. area. Yet for members of rock band The Grateful Fed, playing music provides a sense of connectivity and community. The band’s full roster features Sirtaj Kaur on vocals, Sana Ali on vocals and violin, Seethal Kumar on vocals, Ben Schaare on electric guitar, Eric Rahman on keyboard, Ben Hirschman on bass, and Professor Jaime Marquez on drums. Riad Houry acts as The Grateful Fed’s manager. The band previously played at SAIS D.C.’s happy hour on Dec. 5, and has plans to perform again during the spring semester.

The SAIS Observer recently sat down with Professor Marquez, Sirtaj Kaur, and Ben Hirschman for their thoughts on music, education, and the role that art can play in a foreign policy program.

How did the Grateful Fed start?

Marquez: We were in an informal meeting, several students and I, talking about our lives, what we do, nothing scientific about it. And then I mentioned that I used to play drums in a band here at SAIS, and that I was looking to see if there was interest in the current cohort to play. Ben mentioned that he plays bass. Riad Houry was in the group, and he is a very enterprising and organizing individual, and so he and Chris Burger told us that they had reserved a room and that if we wanted to play the next happy hour, we’re in. Then we started scrambling about, [seeing] who else could play. We ended up with another band with Sirtaj. So it was accidental. There was nothing organized about it. Somehow Eric [Rahman], who works with the SAIS Review asked if he could join. Except for Eric and Sirtaj, I have known them as my students.

Why a band and why at SAIS?

Marquez: I think that one of the most rewarding things about playing in a band is that what I do depends on what the other musicians do, and vice versa. The ability to synchronize, to “click” is a really powerful source of joy. At SAIS, I had been part of a band in 2010 and 2013. The amount of students here at SAIS is so large that you have to assume that some of them have had previous musical training. In this case, not only do they have musical training, but they are just that good.

Hirschman: I had been playing bass by myself on and off for several years now, and I had never performed in front of anyone. I had thought about it, to see if other people at SAIS might be willing to try something, and Professor Marquez basically just did that. It was at the “Fireside Chat” last semester at a bar and there were around ten of us, and he mentioned that he played drums and was looking for people to play with. So I said “yeah, I play bass, I’d be interested.” Then Riad collected information and I got an email that said “Thank you for volunteering to play the SAIS Christmas Party next week.”

Kaur: I think that I had been looking for someone to play with, but I didn’t know, without sending out a random email to everybody, how to actually find out who plays what and who would be interested in forming a band. I think Riad was the one who spoke to Professor Marquez. He said, “I heard you singing and you guys should play in a band together.” I thought it would be a fantastic idea. As for why at SAIS, I think it’s a good channel to do something different, something not related to studies and academics. It’s a lot of fun. You get to learn something new.

Hirschman: It takes your mind off all the stress and all the work.

What have you learned in your time performing and practicing together?

Kaur: You can never, from looking at somebody, know what they do. Because there’s always something fantastic that somebody’s doing in their own time and they’ll just come out of nowhere and in that moment where they’re doing their thing, they will blossom and we saw that with the Professor and Eric. You just never know.

Hirschman: I always worry about how stuff synergizes. I had never performed before alone or in a group. It was just neat seeing how you form a rhythm section with your drummer and how everything fits together and how little things like positioning of amplifiers and microphones really affects the sound. And Eric came along and started destroying on the keyboards. It’s incredible.

Marquez: For me it was finding out how much better musicians the students were than I am. It was seeing them play music and how talented they are. It was humbling for me.

Marquez: Personally, I don’t know anything other than rock. If it’s not rock, I’m just not there. Within rock, I think that for me the one group that just always is the biggest source of inspiration is Pearl Jam.

Kaur: When I play music alone it’s usually not rock because you need so much accompaniment. There’s so much that goes into making a rock song that it just doesn’t sound as beautiful alone. So I’ve never played it on my own. The amazing thing was coming together in this band and being able to sing The White Stripes and The Rolling Stones, which, alone, I would’ve never done. For us, especially the time we did perform, the heaviest influence was probably the Stones.

Hirschman: We were kind of going for what people would know so there’s a lot of classic rock and also songs that are relatively easy to pick up since we only had about two weeks of prep time for this. We would send out YouTube clips and asked whether it was feasible to learn something like this. Most of it was, which was a testament to how good everyone is.

Do you have any thoughts on the role of arts within the SAIS community?

Kaur: I think arts, unfortunately, is deeply missing and one can feel the lack of an artistic mindset within the SAIS community and I think it’s unfortunate because art brings you so much closer to not just who you are but the humanness in everything. I think that, not to say that anything we’re studying is not good or weighty, but we still need to understand that that’s not the only thing in life and that art informs so many things. You can’t look at anything in a vacuum, even economics must be informed by who humans are. How do we know who we are if we don’t take the time to introspect? Art, for me, is a lot of introspection.

This is what the fantastic thing is—everyone in their own way is artistic, but when they come to SAIS, they leave that behind and somehow for me that’s a tragedy. You should come here with everything you’ve got. You don’t have to leave [behind] who you are to go to a policy school.

Hirschman: It’s kind of a tough balance because unless something artistic is your field, you’re not going to go to graduate school for it. And you’re especially not going to go to a top-tier policy school for that. But art really form a central piece of your education even if it’s not the core of what you’re doing, because it expands your mind so much. And it helps a lot with creativity. It would be interesting to see someone try to accumulate arts into the curriculum more.

Marquez: From my standpoint, and I can only say this from music, there is a humanistic aspect to it, but there is also an element of discipline in practicing. And when you start a new song you confront uncertainty.

When you start, the first trials can be completely off, but you keep trying and you put a little discipline, a little perseverance. So when we start, we don’t know if we’re going to succeed. And so what music has done for me is to remind me that “there’s no guarantee that perseverance will yield an outcome. But so far it has.” And that sense is very similar to studying academic fields. When you start a course, you don’t know how it’s going to work. When you start writing a paper you don’t know how it’s going to work. Or whether you’re going to get good at it. I think that what music brings to this endeavor is that you know that if you practice you will be able to get pretty good. So it’s a way of reinforcing a discipline.

I don’t see a trade-off. I think it complements the curriculum. Not so much in that if you can play this song you know American foreign policy. What I mean is that you have the discipline. Chris Burger and Debbie Walls are fantastic in helping us to find the space to practice and store the instruments.  But institutionalizing this support would contribute to integrating art into SAIS’ day-to-day grinding. There’s been some support in SAIS for photography. But what I’m saying is that let’s just put a little more support into music.

One last question: Who came up with the name, ‘The Grateful Fed’?

Marquez: Ben. The moment he said it, everybody liked it. There was no discussion. He said it. We’re done.

Hirschman: Well, you worked at the Fed, so—yeah, Grateful Fed. Let’s do it.

Next post Reflections from 1958: An Alumna Helps the Bologna Center for 60 Years
Zoe Guo