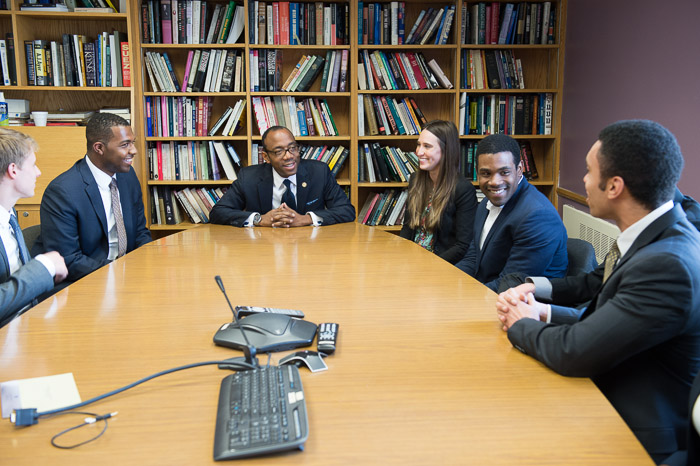 WASHINGTON—On Wednesday, Feb. 25, President and CEO of the NAACP Cornell Williams Brooks evoked his ministerial background to deliver a sermon-like address in Kenney Auditorium on the topic of civil rights in the United States. Hosted by the SAIS Africa Association and International Law Society, the event sought to highlight key civil rights issues people of African descent face in the United States. Recent events in Ferguson and subsequent incidents around the country involving police brutality against people of color has sparked a new debate examining race relations and human rights issues in the country today.

In his address, entitled “Civil Rights in America, from Selma to Ferguson: Captives or Creators of History,” Brooks opened with a Winston Churchill quote, saying: “Those who fail to learn from history are doomed to repeat it.” His remarks highlighted how African-Americans and other minorities have generally been captives of history, but how they currently possess the ability to be creators of history — as we are currently at the crossroads of a “Third Reconstruction” period.

Referring to the post-Civil War period, the first Reconstruction demonstrated a significant chapter in the history of civil rights in America, when the passage of the Fifteenth Amendment to the U.S. Constitution granted suffrage to former slaves. Although many African-Americans began to take part in political life, many southern states passed laws upheld by the Supreme Court that prevented blacks from voting. It was only during the Civil Rights Movement of 1960s (i.e., the Second Reconstruction) that full federal enforcement of the 15th Amendment occurred — resulting from the passage of the 1965 Voting Rights Act.

The same voting rights for which in 1965 Dr. Martin Luther King led the march from Selma to Montgomery, Alabama, Brooks said, are the rights being compromised today through legal tactics like voter identification requirements. Brooks shared that his mother, who was very active in the Civil Rights movement, was worried about which form of ID to take with her to the polls for fear of being denied her fundamental right as an American citizen. Today, there is a new struggle (i.e., the Third Reconstruction) to amend the Voting Rights Act, aiming to introduce a modern set of protections that are flexible enough to end current discriminatory practices . In the end, Brooks contended that students like SAISers as future leaders have the choice to be active in the current fight for civil rights, and therefore be co-creators instead of captives of history.

Dean Vali Nasr provided introductory remarks, introducing the event as part of the Africa Association’s Black History Month programming and acknowledged the growing student activism in issues of domestic civil and human rights. The event drew hundreds of students, staff, faculty, media, and local civil rights activists. Professor Ruth Wedgwood, director of the International Law and Organizations Program at SAIS, gave a personal introduction for Brooks, as he was a former student of hers at Yale Law School. In fact, the story of how this event came together starts with a chance meeting between the two at a local gas station. A longtime card-carrying member of the NACCP, Professor Wedgwood noticed the precarious civil rights situation in the United States, and thought it would be a good idea to invite Brooks to speak at SAIS.

After his remarks, the audience had a chance to ask questions. One question was posed on “respectability politics,” the notion that if minorities (African-Americans in particular) behave and dress a certain way deemed “respectable” by society, then they can avoid certain situations and run-ins with the police that can often turn fatal. Brooks acknowledged that this idea has been entrenched in the black community, and that he himself has even used it to his advantage in his career as a lawyer, but argued that African-Americans should not have to adhere to certain set of standards in order to be treated equally or remain alive.

A group of students had the privilege of attending a small meet-and-greet gathering with Brooks before his address, and had the chance to challenge him with off-the-record questions in a more casual setting. Questions ranged from the NAACP’s stance on the Justice Department’s recent decision on the Trayvon Martin case to oversight strategies to reduce racial profiling in police interaction with citizens to ways to improve data acquisition in order to protect the rights of the LGBTQ community.

Although SAIS’ academic priority is the study of international relations and events that happen abroad, there are many parallels to be drawn between what goes on in other countries and what goes on in the United States. Joe Losavio, president of the International Law Society, said, “I thought it was interesting to hear how the problems minority youth in Europe face – social alienation, discrimination and lack of opportunities – drive them to join groups like ISIS, are the same problems minority youth face here and drive them to join gangs.”

This is a different type of event that SAIS is used to hosting, but the event organizers were pleased to see such a great turnout, which demonstrates that students, faculty, and staff are interested in these issues.

Cornell Williams Brooks is an activist and lawyer, and was chosen as President of the NAACP in May 2014. He received a B.A. in political science with honors, then earned a Master’s of Divinity from Boston College. He also received a law degree from Yale Law School, where Professor Wedgewood taught International Law. He is a fourth-generation African Methodist Episcopal minister and has a long career in civil rights and social justice activism.

Cory Bullock is a second-year student at SAIS, President of the Africa Association, and one of the co-organizers of the event.

Previous post “Future of War” Inaugural Conference in D.C.
Next post Let’s Be Better at This!
Zoe Guo