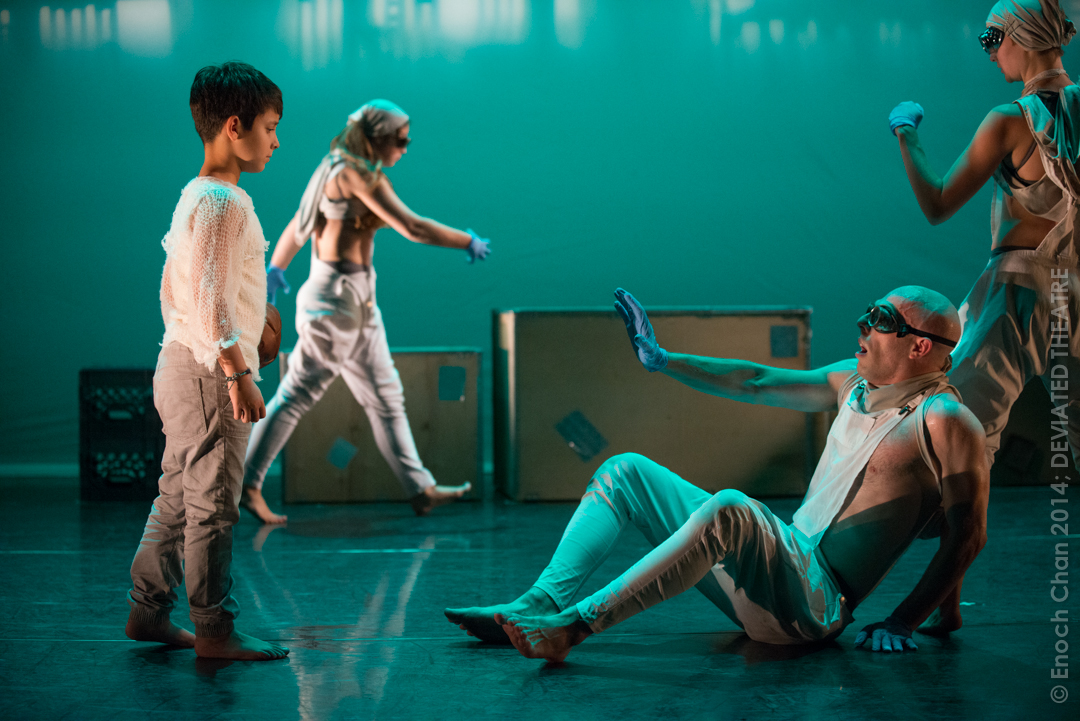 A D.C./Baltimore-based company, DEVIATED THEATRE uses “a mix of dance, acting, and aerials to tell fantastical stories of other worlds in order to shed light on the human condition.” creature is a story filled with drone workers, insect-like creatures, a mad scientist and his dark creations, and one small boy.

Initially, this world is peopled with stiff-limbed figures stalking the stage wearing ivory overalls, their faces obscured by cloth masks and round reflective goggles. On their hands, they sport blue latex gloves. The nine dancers pace and move in jerky, repetitive motions evoking machinery to the sound of crackly melodies and wordless singing evolving to add percussive beats overlaid with spoken interjections, including quotes from the 1971 film Punishment Park — “You want me to tell you what’s immoral? War is immoral! Poverty is immoral! Racism is immoral! Oppression is immoral! Police brutality is immoral! Genocide is immoral! Imperialism is immoral! This country represents all those things!” — in songs like Haunted Days / Witch’s Teat’s aptly-named “Dirty Factory.”

creature’s mesmerizing choreography features visual rounds, intervals of the same movement repeating, limbs jerking inward and figures bending over only to burst forth again, blooming backward, twisting at angles, sharp pivots leading the almost-interchangeable masked workers in an assembly line tracking back and forth across the stage. The drones are female, but for the one male figure who appears horrified, awake, rubbing his eyes while the others continue their head-down movements. Into the scene rolls a leather ball, and a boy child walking in its wake.

The second half introduces a new set of creatures: four quadrupeds capering on hands and feet about the stage, costumed by Australian designer Andy Christ in hues of ivory and beige, each with variations of tulle and netting bunched and gathered in armbands, stripes, or festooned as tails, referential of classical ballet’s tutus, deconstructed. They are bedecked in sleek metallic goggles and oversize net ribbons fashioned into mohawk headpieces designed by choreographer Kimmie Dobbs Chan.

By Act 2, the man has transformed into a robotic monster, a threatening attacker accompanied by a detachment of gray-black figures descending on the ivory-clad quadrupeds protecting the small boy.

The music accompanying the dance is an indispensable part of the show, its rhythms dictating the dancers’ movements and weaving the story from frenetic factory to forlorn and abandoned world, moving between sinister and heartrending. Much of the music drew from the song list of French musicians Haunted Days / Witch’s Teat, compositions featuring sampling and remixing, like “/Crashed /Moon-rvr,” an ethereal rendition of “Moon River;” the intervals recognizable, but the trills missing, like a beautiful object drowned in an underwater shipwreck of a golden era, aquatic and wheezy.

Mixed in with these futuristic electronica and post-modern compositions are pieces like the “Vater unser,” a German-Latin work by Estonian composer Arvo Pärt, whose work shows influences from Gregorian chants, or the Estonian Lullaby performed by the Estonian Philharmonic Chamber Choir; both filling the theater with a cathedral quality of sound, four-part harmonies with bits of a language no one speaks anymore but still recalls old ideas of ritual, the idea of something regarded for lifetimes as holy.

Throughout the performance, an aerial hoop hangs suspended mid-stage, to which dancers periodically return to twist around, wrapping up in it, balancing, dangling, and swirling back down, all flexed feet and angled grace, the languid ease of this mid-air movement belying the incredible muscle control and strength required to twirl so casually meters off the ground.

The show moves between sharp, broken movements and suspended fluidity and grace, momentary escapes from a bleak and menacing would-be world of pacing workers and unpredictable moments of collapse. Suddenly, the stage floors is full of writhing and seizing figures clutching their hands, fingers bent and tensed, moving threateningly toward their own faces, as if to do their owners harm.

These hints of doomsday, a contaminated world and its twisted inhabitants balance with the visions of pointed toes swirling just above the ground, limbs slicing smoothly through the air, and dancers in ivory like crescent moons perched in the aerial hoop, curled into its side, looking down on the world below.

More information on DEVIATED THEATRE can be found at www.deviatedtheatre.org.

The schedule of events for the 6th annual Atlas INTERSECTIONS festival is available at http://www.atlasarts.org/intersections/.