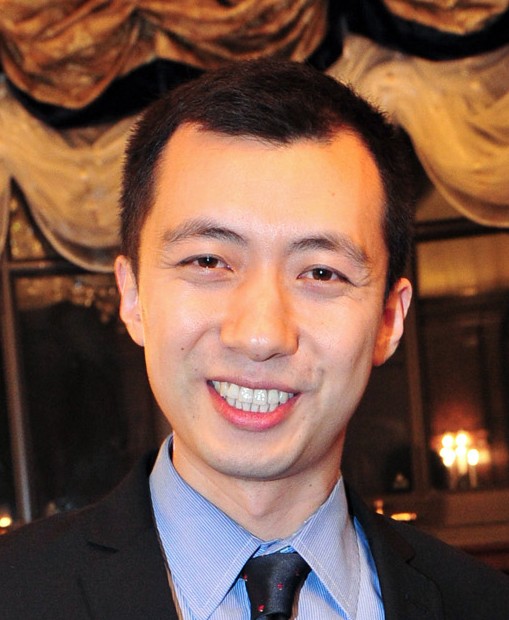 As Chair of Alumni Events for the Johns Hopkins Alumni Club of Shanghai and Vice President of the University of Southern California (USC) Alumni Club in Shanghai, Gary Huang (HNC Certificate ’03, USC BA ’02) is proud to stay plugged in to the network and institutions that brought him success.

Born and raised in L.A., Huang attended the University of Southern California for his bachelor’s degree, majoring in East Asian Languages and Cultures with a minor in Business Administration. His studies brought him to his parents’ homeland twice, the first time for two semesters at Peking University, and the second time for a summer internship in Shanghai. It was during his time in Beijing that Huang was first introduced to the HNC. His academic advisor, Kong Mei, was an HNC alumnus and had invited classmate Anthony Kuhn of NPR for a lecture. Gary was so impressed with Kuhn and his experiences at the Center and subsequent career in China that he applied and enrolled directly after graduating from USC. He has not looked back since.

His career path, however, did not take him directly to a professional life in China. After graduation, Huang worked for a foreign language education company before returning to California. There he started an online women’s apparel e-commerce business that grew for four years. When the financial crisis hit, however, Huang took the initiative to relocate to Shanghai, answering the 21st century call to “Go east, young man!” His USC network eventually helped him find a position at a consulting firm, and his experiences at the Center equipped him to succeed as a director today.

Huang’s work at Prima Shanghai Co., Ltd. since 2008 has focused on Sino-Brazilian trade, mainly in sourcing goods in the automotive and renewable energy sectors from Chinese suppliers to Brazilian clients. “As a Chinese-American working with Brazil in China, I feel like a cultural chameleon of sorts,” says Huang. In order to work in international trade, “you have to speak the language – in our case both Chinese and Portuguese – you have to be a fast learner, adaptable and flexible to different situations, and have patience while communicating between both sides as a matchmaker.” As a professional intercultural-chameleon-business-matchmaker, Huang has worked on projects ranging from importing Chinese solar water heaters to Brazil to building shopping malls and state-of-the-art indoor cycling gyms in Sao Paulo.

According to Huang, the single greatest personal and professional lesson he learned from his time at the Center was respect for (and how to see from) the other perspective. “It is the immersive aspect that makes the HNC truly an unrivaled experience. Living and studying in such close quarters with people from the U.S., China, and around the world exposes you at a quite intimate level with other ways of doing, thinking and living – and this goes for doing business across cultures as well – you have to take the time to make both sides understand the situation better.”

While he is very confident in HNC students’ capabilities, Huang advises graduates to “make sure [to] bring added value” to the table when pursuing a career in China. As more foreigners are drawn to new job and investment opportunities in China while the overall employment market continues to localize, China’s job market is becoming extremely competitive. “As China moves up the value chain,” says Huang, “you can’t get by with language alone. You need some technical expertise to succeed.”

At the same time, guanxi (the catch-all word for the dynamics of good interpersonal relationships) is crucial to enjoying a well-balanced professional and social life in China, and the HNC provides a rare opportunity to establish a tight-knit Sino-American-international network that Huang strongly encourages students to take advantage of while they can. “Ten years down the line only a handful of international alumni are still in the Greater China Region; take advantage of the time you have together to foster those relationships.”

Huang first got involved in the Alumni Club to maintain these vital relationships and later took on more leadership responsibility out of a desire to support future alumni in the transition from school to professional life. “When I was at the Center we didn’t have career services and people like Robbie Shields to guide us,” he says, “so I want to be available to fellow HNCers finding their way.”

Regarding the future of the HNC and the Alumni Club, Huang is optimistic. “The Center will celebrate its 30th Anniversary next year, and I am working with a fellow HNC alum to start a new business lunch lecture series in Shanghai that will attract interest and bring prestige to the Center.”

Enjoying his life and career in Shanghai as both China and Brazil continue their rise to economic prominence, Huang will continue to support and lead HNC alumni in Shanghai as long as he is bringing value to his company and community.

Gary Huang is happy to speak with students at Alumni Weekend and Career Day in Shanghai. Connect with him and other Hopkins Alumni Club leaders in Shanghai at http://alumni.jhu.edu/shanghaiclub.