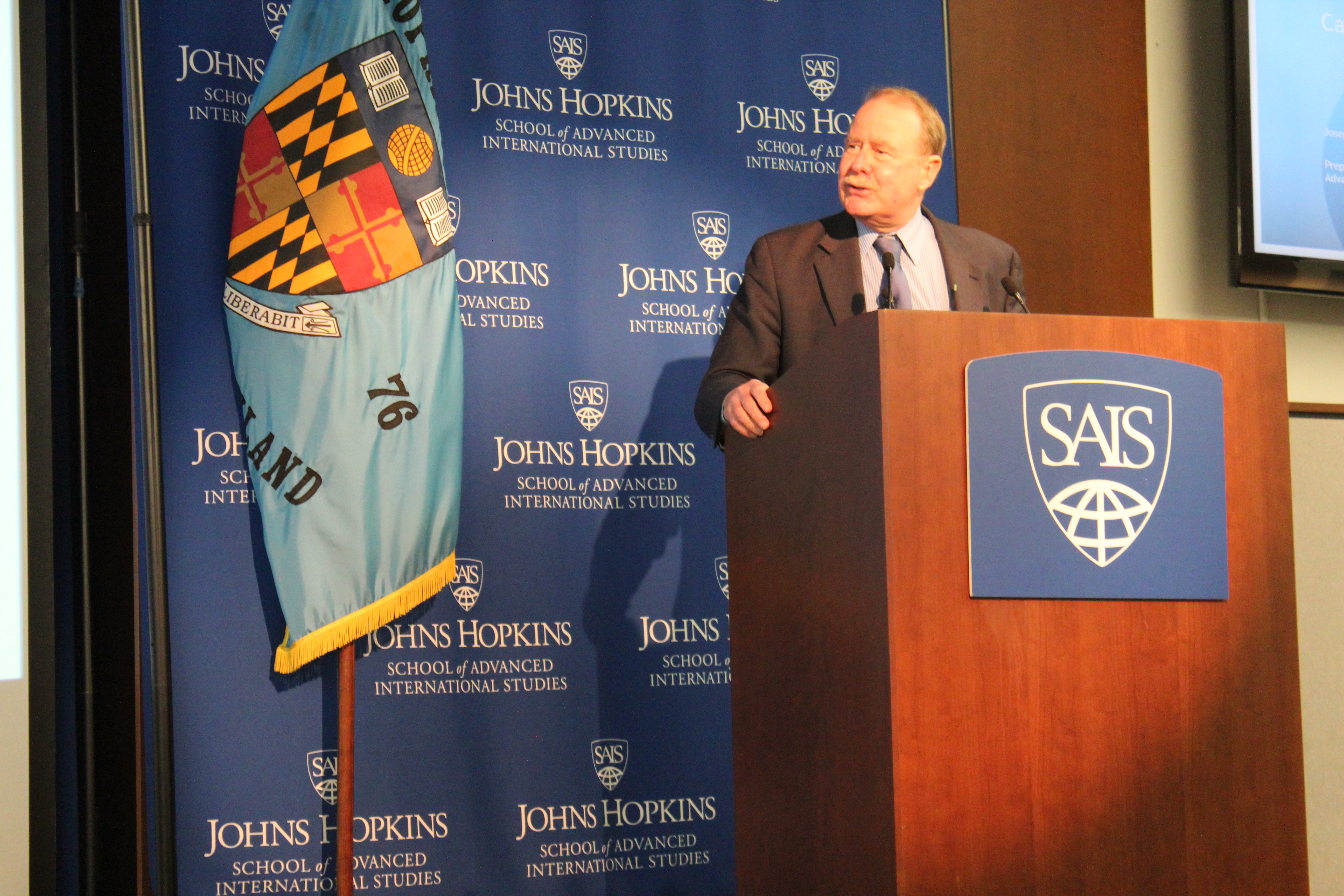 SAIS Professor David Lampton introduced Fewsmith, calling him “one of the most eminent” China scholars, and pointing to recent upheavals in the Chinese political scene leading to a greater degree of uncertainty, and raising questions many so-called China-watchers had stopped asking, like “How stable is China?” or “How important are factions in Chinese politics?” and noted that he had in the past used Fewsmith’s work as assigned reading in his classes.

After commenting on D.C.’s “Florida-like” weather, as compared to Boston’s four-foot snow drifts, Fewsmith began his lecture by talking about how Xi has surprised many observers. Labeled the “compromise candidate,” Xi was expected to lead from the middle. He did not, and instead moved to consolidate power quickly, bringing to an apparent end the post-Mao period of “rule by consensus.” Instead, China seems poised for a return to some kind of strongman rule.

One of the pivotal pieces at the heart of these developments is Xi’s anti-corruption campaign. As Fewsmith said, China has movements against corruption every year, “but nothing like the last 2 years.” “This is a campaign in the old style,” he noted,  showing “the legacy of the Communist Party is alive and well.”

When pondering what allowed Xi to undertake such a brazen campaign, Fewsmith pointed to a sense of domestic crisis, and a feeling that the decade under former leaders Hu Jintao and Wen Jiabao had seen little progress. He further argued that there has been a polarization of elite opinion within China, and a polarization of politics generally in China, which was visible in the brief flare-up over constitutional government reforms.

Going back further into the dynamics behind the campaign, Fewsmith devoted a few minutes to the specter of the Soviet Union, quoting from a speech Xi gave in Guangdong arguing that the Soviet Union collapsed because their ideals and convictions wavered. This is part of a long and significant debate in China about why the USSR collapsed, and the speech showed Xi clearly as pinning the blame on Gorbachev, insinuating that he will most definitely not be another Gorbachev. Fewsmith reflected that this obsession with Soviet collapse indicates “this is a Party worried about falling apart”

Official corruption is a widespread problem in China, for which Fewsmith posits four reasons: low official salaries, enormous opportunity, the need to buy offices, and the need to cultivate followers. The need to cultivate followers linked to another of Fewsmith’s points, which he illustrated by examining the case of Shanxi province, where 15,450 cadres have been disciplined for corruption. Shanxi, Fewsmith said, demonstrates the political ecology of local politics, and the importance of what he called “vertical chains”: pulling your contacts and followers up behind you as you yourself are being pulled up.

The connections among the officials charged and what that has exposed of their connections makes evident that there are factions from the grassroots to the top. In Fewsmith’s opinion, these newly-exposed cases of corruption offer several lessons: these are vertical personal networks (based on locality, family background, personal relationships); they are central to promotion; and they made the province impenetrable to outside control. He also noted that if these factions are responsible for pushing people to higher levels of political power, this changes the understanding of how politics in China works, where many had assumed power and influence flowed from top-down.

In 2014, 8 new cadres were appointed to the Shanxi Provincial Party Standing Committee. None are Shanxi natives. This presents what Fewsmith says is “a clear effort to have what I think you would call a hostile takeover,” and an opportunity for Beijing to have more direct control over Shanxi.

In the midst of this re-centralization of power, and the significant number of disciplined cadres who belonged to networks linked to Xi opponents, Fewsmith acknowledges what many newspapers, outside observers, and those wary of Xi’s motives have long been saying: “it looks like, ‘I’m going after my enemies.’” But rather than dwelling on those accusations, Fewsmith argued that the anti-corruption campaign has to be more than a vendetta or people will become cynical, and argued for the role of institutionalizing deterrents to corruption for a longer-term solution.

The attendees included SAIS Professor Anne F. Thurston, who offered her thoughts. “I have such respect and admiration for all the work of Joseph Fewsmith. He is such a thorough researcher, is in contact with many of the most interesting and important scholars in China, and is full of good common sense. His presentation on what Xi Jinping’s campaign against corruption means for Chinese politics was both fascinating and sobering and gives us lots to think and talk about concerning the near term future of China. The possibility of a new, even if watered down, Mao, (or Putin) is decidedly cause for concern.”

Five-semester China Studies student Rui Zhong said, “I took a lot of China Studies coursework during undergraduate studies and it’s interesting to see scholars who have been China-watchers since the 1970s-1980s who wrote some of the texts I looked at then weigh in on contemporary issues. Fewsmith is one of these scholars, and I really appreciated his breakdown of organizational aspects of corrupt Chinese systems.  His comments on the restoration of ‘strong man politics’ also seem spot-on.”

First-year China Studies student Christopher Beddor added, “Most perspectives in Western or Hong Kong media view the anti-corruption drive as Xi taking out his political opponents. But I was struck by Professor Fewsmith’s argument that it’s also about re-imposing Beijing’s control over certain provinces. It’s a really interesting way to view the campaign.”

Dr. Joseph Fewsmith is Professor of Political Science and International Relations at the Frederick S. Pardee School of Global Studies at Boston University, where he regularly teaches courses like “The Pacific Challenge;” “China: From Revolution to Reform;” and “Problems and Issues of Post-Mao China.” He is also an associate of Harvard’s Fairbank Center for East Asian Studies, and author of several books, including 2013’s Logic and Limits of Political Reform in China.

Previous post 新年快乐！Spring Festival in China
Next post Where Do You See Yourself In Five Years?
The SAIS Observer Staff