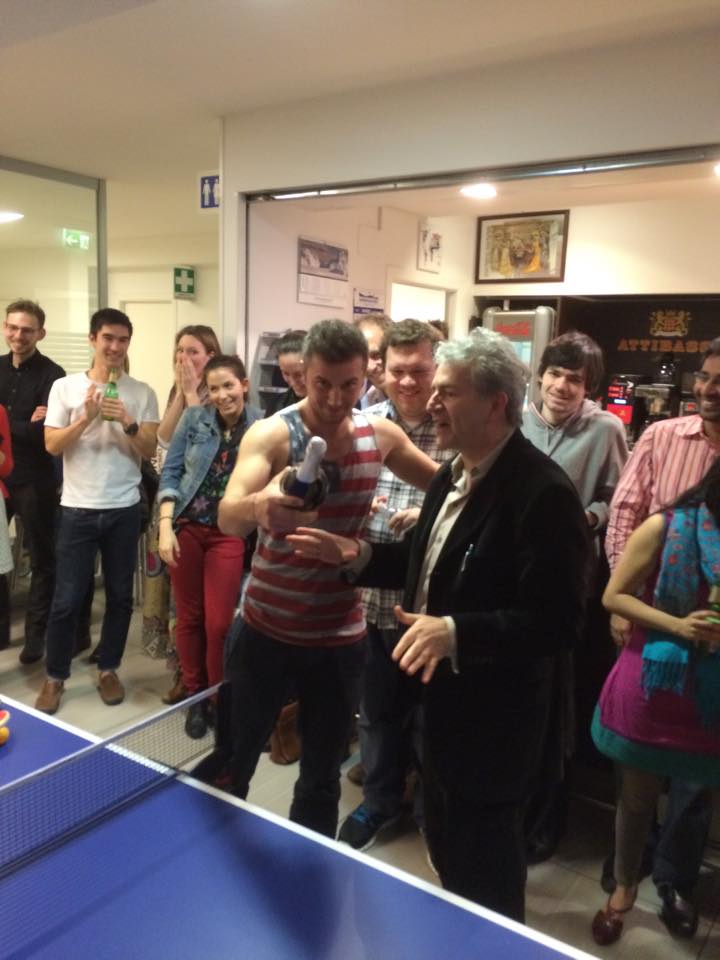 BOLOGNA — As Friday, March 6, marked the close of the first week of midterms, SAIS Europe students bore witness to a long-anticipated, high-stakes match of table tennis, a welcome calm before a stormy second week of exams and papers.

In October, a group of SAISers transformed the basement-level recreation room of the Bologna Center into an arena of bloody ping pong rivalry. A series of matches between students representing an array of countries – Pakistan, Greece, Hungary, Singapore, Serbia, just to name a few – comprised a tournament that has tested the mettle and discipline of many a player. Last Friday at 5:30 p.m. was the final round, with Michael Bustamante from the United States facing off against Charlie Rogan from the United Kingdom.

This final showdown could not take place in the basement, of course. So Giulio Belcastro of Giulio’s Bar, the café adjacent to the Center’s lobby, allowed the club, SAIS Pong, to hold the event in his establishment. It was a magnificent gesture of kindness, to be sure, but the move was also in Giulio’s favor. Any SAIS student at the Center that afternoon dropped what they were doing to view the match, and each spectator could be seen either sipping a sophisticated glass of white wine or guzzling a down-home draught of Padavena beer.

The atmosphere had a festive flare to it, as most students were dressed in their brightest colors in celebration of Holi Day, thanks to the encouragement of the South Asian Culture Club. However, the kaleidoscope audience could not detract from the tension as volunteers helped to prepare the table and each player clutched his paddle (and/or beer bottle) in anticipation. The rivalry was intensified by the fact that Bustamante and Rogan had faced each other in a formal debate over U.S. policy toward ISIS for the Major Issues in U.S. Foreign Policy course during the previous week. Obviously, there was some trash-talking to be had. The Observer caught up with the two opponents to get an earful of preliminary boasting.

“You know, it’s going to be a closely-contested battle, but after Mike’s defeat in the debates, it’s going to be an unfortunate second loss against me in a week,” said Rogan, ironically sporting a sleeveless gray shirt with a large print of the stars-and-stripes. “I just hope he can control his emotions after that.”

“I’ve employed a strategy of not practicing before the games,” Rogan continued, “and it’s worked very well so far. I think Mike’s taking the other route and practicing very hard, but we’ll see who comes out on top today.”

“It’s going to be a competitive match,” Bustamante said in a separate interview. “I think highly of my opponent even though I’m calling the game a 3 games to 1. I’ve seen him play once or twice. Unfortunately, I don’t think the crowd’s going to get their money’s worth tonight, but I’ll try to make it exciting so people can spend a couple more euros at the bar.”

“From Stage 1, I was already considered the underdog; I wasn’t even expected to pass the preliminary rounds. But I swept the last two opponents that I played to get to the finals, so I’m definitely riding a high right now, and I want to take it all the way, take the match tonight.”

After warm-ups, Wyn Bellhouse, the evening’s master of ceremonies, gave an invigorating speech to wish the players well, and Gabor Debreczeni, student statistician and former trader for Jane Street Europe, took his place as referee and scorekeeper. Students and professors crowded the bar, and some of the more nimble individuals balanced themselves on chairs for a better view.

The air grew warm and dense. The players’ eyes waxed steely. Transactions may or may not have occurred. And Bustamante gave the first serve.

The beginning of Round 1 saw everyone’s eyes glued to the bright orange blur of the ping pong ball that flew back and forth across the net. At first, the situation did not look good for Bustamante, who came out of the first half on the wrong side of a 10-3 spread. However, with admirable perseverance and a dangerous backhand, Bustamante claimed the first victory with a score of 21-23.

During the fourth round, it was evident that the two players were pretty evenly matched, as the score remained tied for the first half. However, Rogan was able to call up a few fiery smash hits, which gave him an edge over Bustamante’s steady backspins. The Brit maintained a 2- to 3-point lead after the 13th point, and held his lead all the way to victory. The fourth round proved to be the final round with Rogan coming out ahead, once again with 21-18.

Director Michael Plummer, ceteris paribus, presented the victor with a fine bottle of Prosecco, and the players proudly walked away from a truly respectable match.

In all, the evening showcased the Bologna Center’s level of camaraderie that has been eight months in the making. It is a camaraderie built on friendly rivalries, unconditional support, and riotous reprieves from an academic environment that can challenge our stamina almost as much as an explosive game of ping pong.