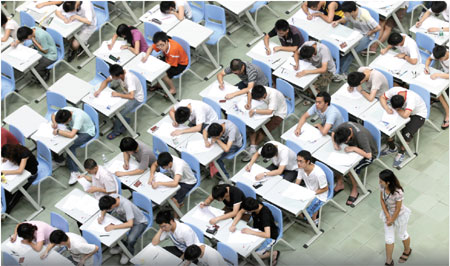 NANJING—The key feature of the Hopkins-Nanjing Center is its bilingual academic structure, something which sets it apart from the majority of study abroad programs around the world. Graduation is dependent on taking, and passing, a certain number of courses in one’s target language, and then – if you’re a Master’s student – writing and defending a thesis in your target language. But how many students are planning to go into careers that will require them to use their target language on a regular basis? And how pressing is it that they can prove second language proficiency to prospective employers?

To start with a fairly obvious point, it would be a shame – not to mention a waste – to spend one or two years being educated in a foreign language only to never use it again after graduation; hopefully, no one at the HNC falls into this category. But, while a number of HNC students have gained work experience as interpreters or language tutors, few are planning on careers as interpreters or diplomats, jobs that necessarily require a second or third language. Ashley Johnson, a certificate student who plans to go on to work for the State Department, is one such person. “I have always enjoyed learning foreign languages, and that is what initially drew me to the State department. I would like to become a Foreign Service officer because you get to use your target language on a daily basis. If I am able to join the Foreign Service, it wouldn’t be guaranteed that I would work in China, but then I would have the opportunity to learn another language.”

Most HNC students appear to be somewhere in the middle of this spectrum: their language ability is something that they would like to be able to use in their future careers, but it works just as well as an item on their resume. That will not come as too much of a surprise to any HNC readers. Proving one’s language skills to future employers is a much more pressing concern for Chinese HNC students than for their international counterparts, which is why many Chinese students are currently studying for the TOEFL or IELTS alongside their regular course load. “If I end up working for a big law firm working on an IPO, sometimes they will have foreign clients,” said one Chinese certificate student who preferred to remain anonymous. “So the lawyers they hire need to have fluent English for the job.”

Currently, no international students are planning to take the HSK, or any similar Chinese proficiency test, any time soon. Perhaps this is because the HSK is generally administered overseas, or perhaps the dominance of English in the world of business and diplomacy makes a certificate of language ability less urgent. Prospective Chinese employers in the both the public and private sectors do seem to place a greater premium on English language abilities than American employers do on Chinese proficiency, or proficiency in any other language for that matter.

At this stage, proving one’s second language proficiency is not an urgent consideration for international first-year Master’s students and five-semester students; for those students who have had internships or other work experience as translators or interpreters, that experience will be proof enough that they can perform reasonably complex tasks in the language.

For international students it seems that the need to prove second language proficiency is a medium to long term consideration, whereas Chinese students who graduate in a few months need to establish their language credentials sooner rather than later. “On the one hand, I want to pass the exam so that I can strengthen my English language ability,” said Li Ping, a certificate student studying for the TOEFL. “One the other hand, my English language skills may become one of my key strengths as I go to find a job at a foreign company in the future.”

Previous post HNC Career Day: The Crossroads Between the Present and the Future
Next post China’s Energy Challenges
sgrosve2