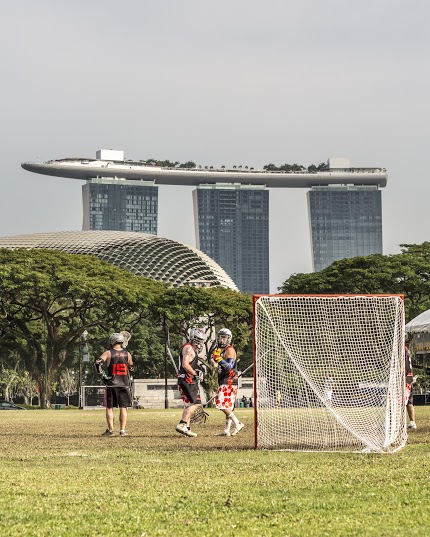 NANJING — Stepping off the plane, lacrosse stick in hand, I walked down the stairs and onto the tarmac of the Singapore Changi Airport. I couldn’t believe where I was.

A couple of years ago, I had heard rumors of a lacrosse team in Shanghai. I was excited, but needed more proof before I brought over all my equipment. Then last spring, while visiting one of Nanjing’s local watering holes, I got proof: a real, live member of the team. With confirmation of the team’s existence, I had my brother, who was about to move to China, haul my lax gear over.

Fast forward a few months, and I was standing on the field in Shanghai preparing for my first game in China. Joining me in his first game with the team was fellow HNC student John Hackett. We met two HNC alumni, Amir Alamdari and Zach Goodnough, both  seasoned veterans of the team. The Shanghai Lacrosse team was started in the spring of 2011 as a throw-around for expats trying to get their lax fix. By that July, they were having games and in spring of 2012, there was a full-fledged, two-season-per-year league. With a roster of forty or so players and a participation rate just above fifty percent, there were always enough players to field two teams every Saturday afternoon. Talking with John back in Nanjing, he said, “I will definitely go back. Playing in Shanghai was surreal, the program has so much momentum and such a high level of intense, but friendly, competition.”

Before even setting foot on the field in Shanghai, I had heard about a tournament in Singapore that needed bodies. I jumped at the chance to not only visit Singapore for the first time but to play in an international lacrosse tournament. With teams hailing from Shanghai, Perth, Hong Kong, and Singapore, the 2014 Singapore Lacrosse Spectacular was the largest lacrosse tournament ever held on the small island nation.

In the run up to the tournament, everyone knew Team Singapore would be the team to beat. They were a group of seasoned expats that had been playing together for some time. Perth was a younger team made up of both Australians and expats living in Australia. The Hong Kong team was all native Hong Kongese players and showed great potential for growth in Asia.

What the Hong Kong team lacked in experience, they more than made up for in coaching firepower. Their staff included 2014 World Championship Most Valuable Player Dillon Ward and fellow professional lacrosse player and former college teammate Karsen Leung. When asked about the team, Ward said, “I was totally blown away by their work ethic. They absorbed everything we threw at them and the group was just so eager to learn.” Leung echoed those sentiments, adding, “These young athletes are very athletic and determined to improve.”

Situated downtown and surrounded by countless skyscrapers, the location could not have been better. The grass field was great for competition on the first day, but a monsoon that night put the field under water the second day. Our first game of the day and second against Singapore was cancelled and called a draw. We had beaten Singapore the first day and had a feeling that we would be seeing them again in the championship.

As fate would have it, this was exactly what happened. Finishing 4-1-1 after two days of play, we were tied for first with Singapore. The championship game was tight throughout, with Shanghai holding a 2-0 lead at half-time. In a defensive struggle, Shanghai was unable to score again while Singapore added two to make it a tie game before finally blasting one past the goalie in the final minutes of play.

Although an unfortunate end for Team Shanghai, the tournament, meant to be fun and bring exposure to the sport, was a huge success. After the final game, the teams gathered on the field for pictures and an awards ceremony before going to the post-game reception. Players, coaches, family and friends of each team celebrated a successful weekend with good food and local brews, while the organizers thanked us for coming and participating. They let us know preparation had begun for next year’s tournament and that they hoped to see us there.

The good news for Team Shanghai was that we won’t have to wait a whole year to avenge our loss to Singapore. Hong Kong is hosting the Hong Kong Lacrosse Open in April and, lacrosse gods willing, Shanghai will be the ones hoisting the trophy.

One thought on “The 2014 Singapore Lacrosse Spectacular”

Previous post 1st and Mr. Long: The Development of American Football in China

Next post HNC Career Day: The Crossroads Between the Present and the Future
Zoe Guo