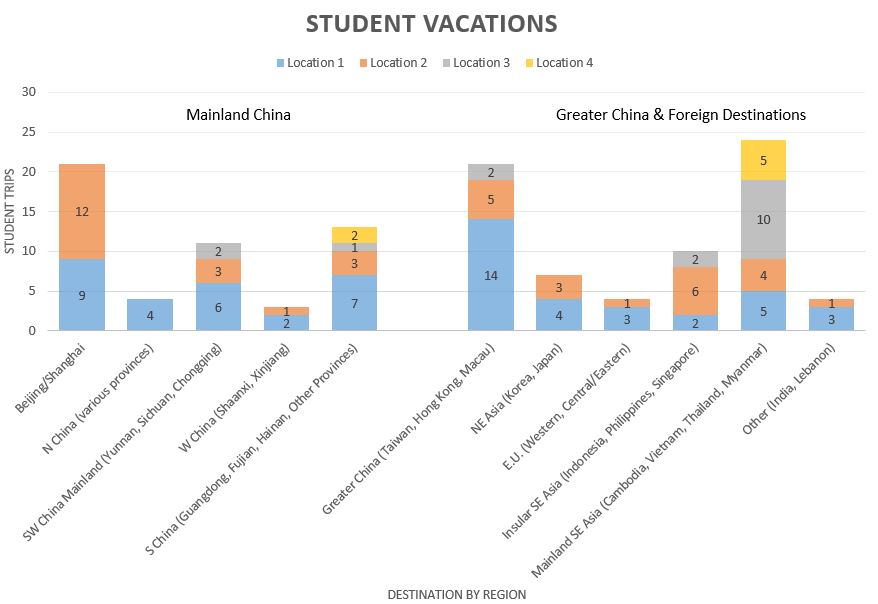 HNC students rack up their frequent flyers miles over their long winter break.

NANJING — Two weeks ago students came back to the HNC after a six-week vacation with mixed emotions, ranging from relief at no longer having to live out of a suitcase, reluctance to return to a still-chilly Nanjing after relaxing at sunny beaches, to enthusiasm for settling into the routine of a new semester.

Since the Spring Festival is the closest Chinese equivalent of the Christmas/New Year holiday season in the West, the vast majority of Chinese students went home for the break and returned eager to hit the books. The HNC’s international and American students, on the other hand, took advantage of this time in various ways.

Several students stayed put in Chinese cities and interned, while others represented the HNC at the Jessup International Law Competition in Beijing or met with employers in Shanghai and Hong Kong during the annual SAIS Asia Trek. Some second-years holed themselves up and worked on their theses. Most students, however, decided to rack up their frequent flyer miles and travelled around China and Asia – and beyond.

I decided to take a poll of the Center’s 69 international and American students to get a sense of where the HNCers spent their vacation. Perhaps unsurprisingly, of all students surveyed, 21 returned home to the U.S. for at least part of the break, making it one of the most popular destinations for some much needed R&R after a demanding semester.

The following bar graph displays the results of my survey in number of student-trips to non-U.S. destinations, classified by region and further categorized by country or province. It excludes the 8 students that spent the entirety of their break in the U.S. and another student that stayed in Nanjing to write his thesis. As students were unable to make it home for the holidays last year, some made up for it by splurging their would-be gift funds on multi-city/province/country tours, therefore the graph does not reflect a one-to-one student-destination ratio but rather displays the total trips made by 60 students.

The number of trips made (122 total) was divided relatively evenly between mainland China (44%) and Greater China and other foreign destinations (56%). At the regional level, mainland SE Asia was the largest draw at 19% of student-trips with Thailand as the leader and 3rd most popular destination, representing 8% of total trips. The Greater China Region and mainland China’s largest cities of Beijing and Shanghai tied for second place, both drawing 17% of student-trips. China’s financial capital, Shanghai, came in 2nd place for most popular destination, and Taiwan beat out Hong Kong and Macau for leadership in the Greater China Region, attracting 11% of student trips, making it the single most popular non-U.S. destination at the sub-regional level.

Students’ vacation destinations display an apparent preference for warmer weather, convenience and affordability. Although mainland SE Asia was the most popular region due to its climate, distance and ease on student budget, Beijing, Shanghai, and the Greater China Region (primarily Taiwan) together account for 34% of total trips, most likely due to linguistic convenience and the comforts and excitement of urban life.

Regardless of destination, however, HNCers’ vacations were not only relaxing and fun, but learning experiences as well.

While many students spent the part of their break travelling individually, many also travelled with fellow HNCers. The SAIS Observer’s own Theo Robie organized a comprehensive tour of Vietnam, Thailand, Myanmar, and India with three other classmates, including one Chinese student who had never been abroad before.

Certificate student Annie Twombly, who had previously never been to China before enrolling at the HNC, managed to visit ten cities, alternating between travelling solo and with friends. Comparing her experiences, Twombly realized that travelling alone is not all that lonely. “When I’m with people I know, I fall into a comfortable silence as we explore a new place together. But when I travel alone, talking to anyone and everyone around is the only way anything gets done, from getting recommendations for food to just being curious about my surroundings. So I actually talk more when I travel by myself.”

After spending time with family in Colorado and touring mainland China with her mother, Certificate student Tara Mullin rang in the Year of the Ram with HNC friends in Taiwan. Being her first time on the island, she found it interesting to see the ways in which traditional Chinese culture was incorporated into modern society. Mullin especially enjoyed that “temples were tucked away and mixed into every corner of life, bustling with New Year celebrations.” Five-semester student Ashley Johnson also took her mom around China and mainland SE Asia before meeting up with other HNC students in Cambodia. “It was a blast to catch up on each other’s trips and practice Chinese on the beach before heading back to the winter in Nanjing,” said Johnson.

Some students took their vacations farther afield from the Middle Kingdom. European students returned home and American student Julia Bowie organized her own tour of Germany, Austria, Hungary, the Czech Republic, and Lebanon while visiting friends along the way. First-year MAIS student Teal Mingledorff enjoyed her travels throughout the Xinjiang Uyghur Autonomous Region in China’s far flung western frontier. “Xinjiang’s diverse landscapes, music and cuisine all took my breath away. I can’t wait to return soon and stay as long as possible.”

After such whirlwind journeys one would think that HNC students’ wanderlust has been satiated. Here in Nanjing, however, only two weeks in to the new semester, students are already planning out their spring break and summer vacation plans.

I wonder where our students will be heading off to next?